California’s drought-plagued Central Valley hogs the headlines, but two-thirds of your winter vegetables come from a different part of the state. Occupying a land mass a mere eighth the size of metro Los Angeles, the Imperial Valley churns out about two-thirds of the vegetables eaten by Americans during the winter. Major crops include broccoli, cabbage, carrots, cauliflower, and, most famously, lettuce and salad mix.

And those aren’t even the region’s biggest moneymakers. Nestled in the state’s southeastern corner, the Imperial Valley also produces massive amounts of alfalfa, a cattle feed, and its teeming feedlots finish some 350,000 beef cows per year.

In terms of native aquatic resources, the Imperial makes the Central Valley look like Waterworld. At least the Central Valley is bound by mountain ranges to the east that, in good years (not the last several), deliver abundant snowmelt for irrigation. The Imperial sits in the middle of the blazing-hot Sonoran Dessert, with no water-trapping mountains anywhere nearby. It receives a whopping 3 inches of precipitation per year on average; even the more arid half of the Central Valley gets 15 inches.

The sole source of water in the Imperial Valley is the Colorado River, which originates hundreds of miles northeast, in the snowy peaks of the Rocky Mountains. As it winds down from its source in the snow-capped peaks of northern Colorado down to Mexico, it delivers a total of 16.5 million acre-feet of water to the farmers and 40 million consumers in seven US states and northern Mexico who rely on it. (An acre-foot is the amount it takes to flood an acre of land with 12 inches of water—about 326,000 gallons.)

Of that total, the Imperial Valley’s farms gets 3.1 million acre-feet annually—more than half of California’s total allotment and more than any other state draws from the river besides Colorado. It’s an amount of water equivalent to more than four times what Los Angeles uses in a year, according to figures from the Pacific Institute. 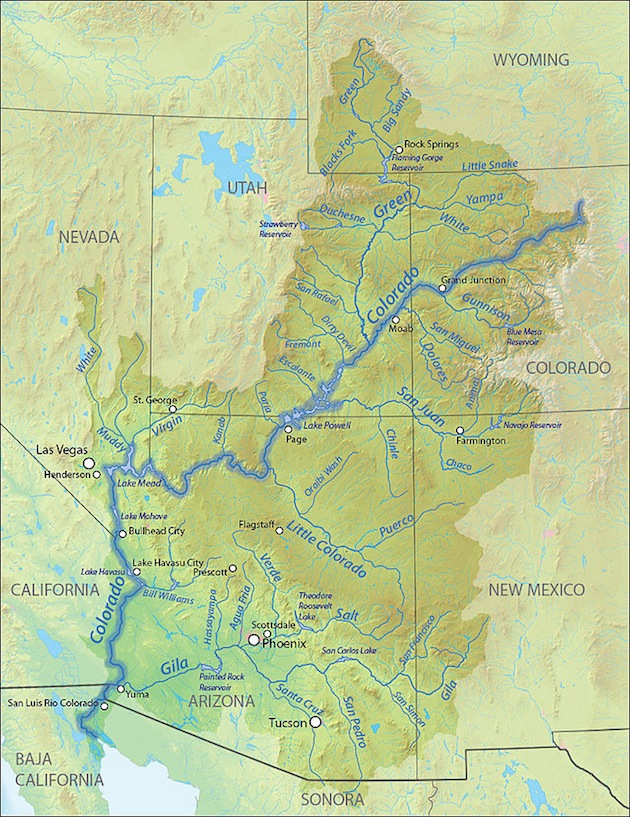 The Colorado Rivers waters are so in demand that they rarely reach their endpoint in Mexico’s Sea of Cortez. Map: Shannon/Wikimedia Commons

Because it owns senior water rights based on a 1931 pact, the Imperial gets its allotments during low-flow years even when other regions see reductions. Currently, the Rocky Mountain snowpack that feeds the Colorado stands at about 44 percent of its average for this time of year, triggering fears of an impending shortfall—but not for the Imperial. “Nevada, southern Arizona and Mexico will be cut back before the Imperial district loses a drop,” The Los Angeles Times recently reported. Whereas Central Valley farmers, reliant on vanishing snowmelt from the Sierras, have seen their irrigation allotments curtailed the last two years, growers in the Imperial Valley haven’t lost any water (though the Imperial Valley District did agree to sell as much as 0.2 million acre-feet of water by 2021, of its 3.1 million acre-foot allotment, to fast-growing San Diego in a 2003 deal).

The Imperial gets its allotments during low-flow years even when other regions see reductions.

Already, decades of intensive desert farming have had severe ecological effects, epitomized by that beleaguered inland body of water known as the Salton Sea, which sits uneasily at the Imperial’s northern edge. Before the big irrigation projects that made the valley bloom, what’s now the Salton periodically captured flood waters from the then-mighty Colorado River. Now it’s fed solely from Imperial Valley farm runoff, and as Dana Goodyear shows in a superb recent New Yorker piece, it’s slowly decaying into a toxic mess—one that could “emit as much as a hundred tons of fine, caustic dust a day, leading to respiratory illness in the healthy and representing an acute hazard for people with compromised immune systems.”

Meanwhile, the Colorado’s flow has proven inadequate to supply the broader region’s needs. In a paper last year (my account of it here), University of California-Irvine and NASA researchers found that farmers, landowners, and municipalities are supplementing their river allocations by drawing water from underground aquifers at a much faster rate than had been known. Between December 2004 and November 2013, the Colorado Basin lost almost 53 million acre-feet of underground water, an enormous fossil resource siphoned away in less than a decade. 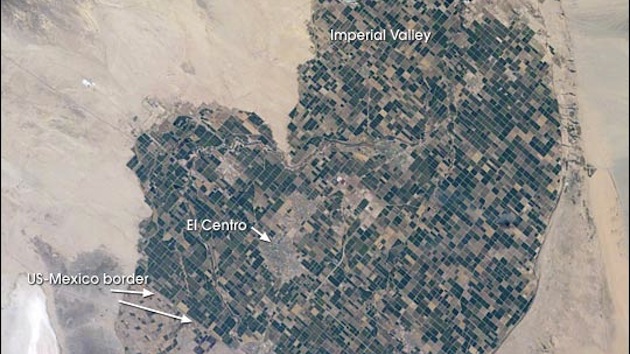 A desert in bloom: the Imperial Valley as seen from space, from a photo taken by NASA astronauts in 2002. Photo: NASA

Consider also that the Southwest’s population is on pace to expand by a third by 2030—and that the river’s annual average flow is expected to decrease by anywhere from 5 percent to 18 percent by 2050, compared to 20th century averages, according to the National Climate Assessment, throttled by rising temperatures and declining precipitation.

Thus the Imperial’s titanic water allotment is looking increasingly vulnerable to challenge. Just as we probably need to get used to sourcing more of our summer fruits and vegetables from places beyond California’s Central and Salinas valleys, the Colorado River situation makes me wonder if we shouldn’t rethink those bountiful supermarket produce aisles in February, as well.