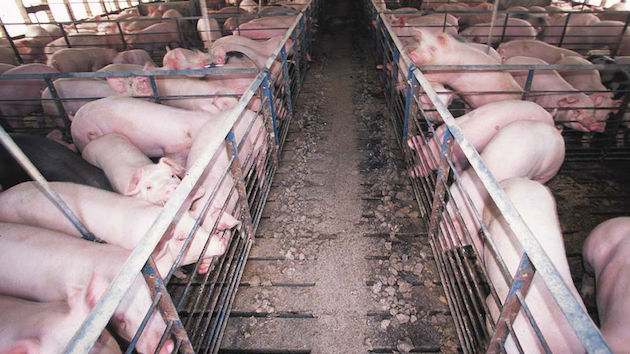 Here’s another reason why Americans should think twice about how the United States is emerging as the globe’s hog farm: concentrating thousands of hogs in one place means concentrating huge amounts of their shit, too; and that shit puts off gases that are so noxious that they can kill people who work near them. Think I’m exaggerating? Get this, from the Des Moines Register:

A father and his son who were so close that they were “like glue” were killed Saturday by noxious fumes from a northwest Iowa hog manure pit—the second father and son in the Midwest to die of poisonous manure pit gases this month.

These large, indoor facilities confine hogs above their own waste on a slatted floor—the waste falls through the slats and collects in a pit below. An incredibly putrid aroma—I’ve smelled it—shrouds these facilities. The air contains hydrogen sulfide, methane, ammonia, carbon dioxide, and volatile organic compounds. Hogs can live above these poison-gas cesspools because giant fans keep the air moving. But when something goes wrong beneath the slats, workers have to venture into places where there is no effective ventilation. And that’s what happened on this Iowa hog farm, to heartbreaking effect.

The two were repairing a pump at a hog confinement when a piece of equipment they were using fell into the manure pit, Wempen [a relative] said. Austin Opheim went into the pit first to retrieve the equipment, and his father followed him after realizing his son had been overcome by gases, Wempen said. …  “(Gene) was carrying Austin on his back and bringing him up and he got almost to the top and he got overcome, and down they went,” she said.

Such disasters can usually be averted by donning proper breathing equipment when venturing beneath the slats. But in recent years, Midwestern hog facilities have been beset by a mysterious foam that settles at the surface of manure pits, which creates a buildup of volatile gases that that has caused many explosions. Back in June, two workers at a Minnesota hog farm died in a fire that erupted after they had been cleaning the slats of an empty hog facility—apparently the result of “power-washing activities bursting the foam bubbles in the manure pit” below. And last year, reports the trade journal Pork Network, a “similar fire in Iowa severely burned Leon Sheets, a past president of the Iowa Pork Producers Association, as he power-washed one of his hog barns.”