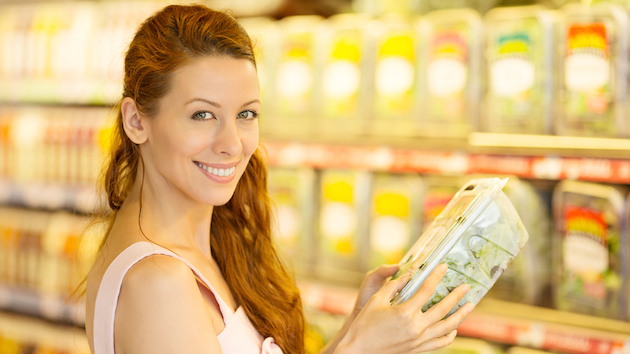 Dietary virtue in a clamshell—or just a bunch of expensive water? <a href="http://www.shutterstock.com/cat.mhtml?lang=en&language=en&ref_site=photo&search_source=search_form&version=llv1&anyorall=all&safesearch=1&use_local_boost=1&autocomplete_id=&search_tracking_id=7acPPR0VrsgSL6GksNgyjA&searchterm=salad%20greens%20supermarket&show_color_wheel=1&orient=&commercial_ok=&media_type=images&search_cat=&searchtermx=&photographer_name=&people_gender=&people_age=&people_ethnicity=&people_number=&color=&page=1&inline=212564887"PathDoc</a>/Shutterstock

Nothing quite promises dietary virtue like the wall of boxed salad greens you’ll find in a typical supermarket produce section: plump, little plastic clamshells, often adorned with words like “superfood,” or “antioxidants,” stuffed with precut, chlorophyll-tinted leaves, and penance for that bag of chips or tub of ice cream lurking in the shopping cart.

By the time they’re cut, washed, packaged, trucked, and stacked on the shelf, salad greens have likely surrendered the great bulk of their nutritional content.

Is it all just a mirage—is our devotion to salad really a vice?

In her latest Washington Post column, Tamar Haspel makes a provocative point: “Lettuce is a vehicle to transport refrigerated water from farm to table.” Iceberg lettuce, she reports, is 96 percent water by weight. And the other 4 percent doesn’t offer much in the way of nutrition—a whole salad’s worth has just a gram of fiber (a fourth of what you’d get from a medium apple) and barely a tenth of a day’s requirement of vitamin A and C.

Similar-sized servings of other salad greens, including red leaf lettuce, romaine, arugula, and spinach, deliver a much bigger nutritional punch. But the great bulk of these popular salad greens are grown in California and shipped across the country. By the time they’re cut, washed, packaged, trucked, and stacked on that pious supermarket shelf in your hometown, they have surrendered the bulk of their nutritional content, strong evidence suggests.

And let’s face it: Fancy marketing prose aside, what those bags too often offer is wan and bland, not the peppery jolt of, say, fresh-picked arugula. So what you’re mainly buying are limp tissues of water, most likely shipped from one of two California growing regions (the Imperial or the Salinas valley) with severe long-term water issues.

Haspel adds that in addition to their dubious nutrient density and water economics, salad greens rank as our “top source of food waste” (she reports that 1 billion pounds of salad greens spoil before they’re consumed each year) and also the “chief culprit for foodborne illnesses” (the Centers for Disease Control and Prevention says leafy greens are “responsible for 22 percent of all food-borne illnesses from 1998-2008“).

What, then, to make of the social expectation that no healthy meal is complete without a salad? Haspel suggests pulling back from it: “Maybe we should stop thinking about salad as a wholesome staple, and start thinking about it as a resource-hungry luxury.”

I try to confine my fresh leafy-green consumption to those times of year when my own garden or farmers around me can readily churn out arugula, spinach, and other nutrient-dense greens. When good salad greens are scarce—as they are now in the infernal Texas summer—I often make a straight parsley salad; parsley has nearly four times the vitamin A and eight times the vitamin C of arugula, which itself is no slouch compared with iceberg lettuce. Or I mash up this bright-tasting herb with a raw seasonal vegetable, like cucumbers, along with heat-hardy basil and garlic chives. I’ve got my eye on this Bon Appetit recipe for a salad built entirely on scallions and cilantro.

Way back in 1988, the restaurant critic Jeffrey Steingarten penned a marvelous essay called “Salad: The Silent Killer” (you can read it here). In it, he deplored the habit of “tuck[ing] into the dreariest salad simply because it is raw and green. No matter that the arugula is edged with brown…[or] that it is the dead of winter and the salad chills us to the marrow.” His real target was out-of-season, cross country-trucked, flavorless greens. The convention that no healthy dinner is complete without them has persisted, and it remains absurd. Like the little girl in the old New Yorker cartoon, “I say it’s [limp] spinach, and I say, to hell with it.”