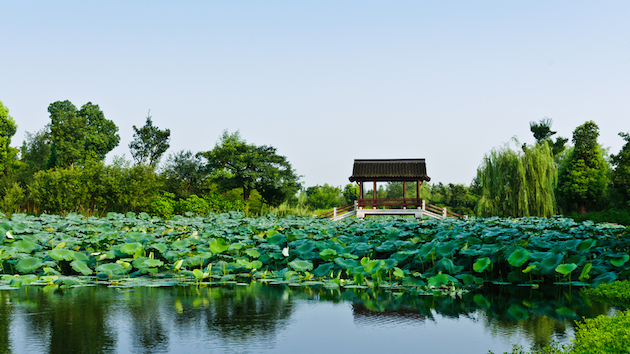 A sixth of the globe’s fish catch comes from waters off China’s coasts. Yet the nation’s industrial push is imperiling that 15 million-ton annual haul. Fully 60 percent of the China’s wetlands have been paved over for development projects—and much of what’s left is under threat of more of the same.

Between 2000 and 2013 alone, China’s total coastal wetlands shrank by about 23 percent.

That’s the conclusion of a jarring new report (hat tip to the New York Times) by the US-based Paulson Institute, the Chinese State Forestry Administration, and the Chinese Academy of Sciences.

Coastal wetlands are the breeding and feeding grounds for fish, migratory birds, and other creatures. They also buffer coastal cities from the sea’s caprices by absorbing energy from storm-roiled waves—an increasingly important function as climate change proceeds apace. Over the last half century, the report found, China has developed more than half of the coastal wetlands in its temperate northern regions and nearly three-quarters of the mangrove forests and 80 percent of coral reefs along its southern coast. Losses accelerated between 2003 and 2013—in that time frame alone, China’s total coastal wetlands shrank by about 23 percent.

To address the situation, the Chinese government decreed earlier this year that intact wetland acreage should not fall beneath a “red line” of 131.8 million acres, which it established as a minimum for ecological stability in its coastal regions and to maintain wild fisheries. The problem is, the report states that remaining coastal acreage already hovers at just above that level, and there are plans in place to develop another 1.4 million acres by 2020.

The consequences are dire. China’s wetlands are “irreplaceable and integral parts of the East Asian-Australasian Flyway” for migratory birds, providing “critical breeding, staging and over-wintering sites” for 246 species, including 22 that are listed as globally threatened, the report found.

Then there are those prodigious fisheries off China’s coast. They’ve been “over-fished for a long time,” the report states, and to pave is to remove the breeding and nursery sites that replenish them.

The disappearance of China’s wetlands is yet another example of the globe’s most populous nation sacrificing food production capacity to maintain its dominance in manufacturing. The process has generated a bounty of goods for US consumers—including the device on which I’m writing this piece and probably the one you’re using to read it: indeed, smartphones.

But it has also put severe pressure on the country’s ability to feed its population. More than 40 percent of China’s arable land has been degraded by some combination of erosion, salinization, or acidification—and nearly 20 percent of it is polluted with heavy metals, whether by industrial effluent, sewage, excessive farm chemicals, or mining runoff. These are chilling numbers, given that China has just 0.2 acres of arable land per capita—less than half of the global average and a quarter of the average for OECD member countries. (The United Sates has 1.2 acres per person.)

Now wetlands destruction is threatening the nation’s fisheries. No wonder it’s looking elsewhere for food production, investing in farmland in Africa, South America, and Central Asia, and buying up 64 percent of the globe’s internationally traded soybeans.