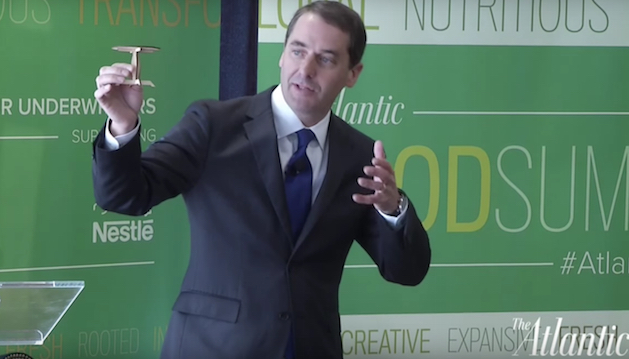 Elanco, the animal-health division of the pharma giant Eli Lilly, makes one of the world’s most controversial growth-promoting chemicals for meat production: ractopamine, marketed as Optaflexx for cattle, Paylean for pigs, and Topmax for turkeys.

The campaign insists that organic methods, which forbid growth-boosting chemicals for animals, aren’t going to cut it when it comes to fixing hunger.

A member of the class of medicines known as beta-agonists, which are also given to asthmatic people to help relax their airway muscles, ractopamine makes animals rapidly put on lean weight—but it also mimics stress hormones and makes their hearts beat faster. Studies suggest that it makes livestock more vulnerable to heat. Ractopamine is banned in the European Union, China, and more than 100 other countries, and it faces mounting criticism here in the United States.

To clean up his company’s image, Elanco’s president, Jeff Simmons, has launched a “counteroffensive,”  reports Bloomberg Businessweek reporter Andrew Martin. In addition to his responsibilities operating a $2.3 billion-dollar global animal-drug business, Simmons runs an initiative called ENOUGH Movement, which calls itself a “global community working together to ensure everyone has access to nutritious, affordable food—today and in the coming decades.” Combating global hunger is one of ENOUGH’S major themes. Simmons uses a “grainy photo of [himself] carrying a small African child on his back” as his Twitter avatar, Martin reports.

Elanco served as the primary underwriter of The Atlantic magazine’s 2015 Food Summit, held last week in Washington, D.C. Simmons delivered a sponsored presentation at the event. In it, he complained that a group he labeled the “fringe 1 percent,” agitating for increased regulation on meat producers, is driving the national debate around food. Simmons also regaled the crowd with ENOUGH’s core messages: The world needs to produce 60 percent more meat, eggs, and dairy by 2050; doing so will require “innovative farming techniques that increase efficiency;” and organic methods—which forbid growth-boosting chemicals for animals—aren’t going to cut it. Instead, ENOUGH insists, “we must leverage the innovations and technological advances that will allow us to produce more food without using more resources.”

One can see why an exec operating in the meat industry might be feeling defensive. Industrial-scale meat production has been linked to the rise of antibiotic resistance in human medicine (which claims at least 700,000 lives per year globally); ecological ruin; increased risk of cancer; and the hollowing out of communities where it alights. Insult to injury, US consumers have been cutting back on meat consumption overall, and turning increasingly to drug-free, pasture-raised product.

And Simmons has rushed into the fray. In short, Martin shows, Simmons is taking a page from the agrichemical/GMO industry playbook: present your industry as crucial to “feeding the world” as global population grows to 9 billion by 2050, and paint your critics as out-of-touch elitists who are indifferent to hunger and poverty.

“Simmons doesn’t directly pitch Elanco products during his speeches on hunger, saying he has a higher purpose: alleviating world hunger and changing a conversation that’s been hijacked by a vocal fringe of activists,” Businessweek’s Martin writes. “If the arguments sound familiar, it’s because Monsanto and other proponents of genetically modified foods made similar claims.”

One key part of the strategy to avoid discussion of existing products, and point instead to future innovation. Generally speaking, Monsanto execs prefer to talk about still-in-development crops rather than current offerings, which are riddled by weeds and insects that have evolved to resist them. Likewise, Simmons doesn’t say much on the stump about the company’s best-known product, ractopamine.

A 2014 study from Texas Tech and Kansas State researchers found that it nearly doubled the mortality rate of cows fed on it in the weeks before slaughter. As for pigs, the drug has “triggered more adverse reports in pigs than any other animal drug on the market,” a 2012 investigation by journalist Helena Bottemiller found. “Pigs suffered from hyperactivity, trembling, broken limbs, inability to walk, and death, according to FDA reports released under a Freedom of Information Act request.”

Rather than ponder such troubles, Simmons urges us to imagine a future where meat is abundant and the scourge of malnutrition has been defeated, all driven by “innovation” and “science.” Whether or not that vision comes to pass, this much seems clear: We’re on the verge of a loud campaign by the meat industry, particularly its pharma sector, to portray its critics as a privileged fringe, untroubled by global hunger.