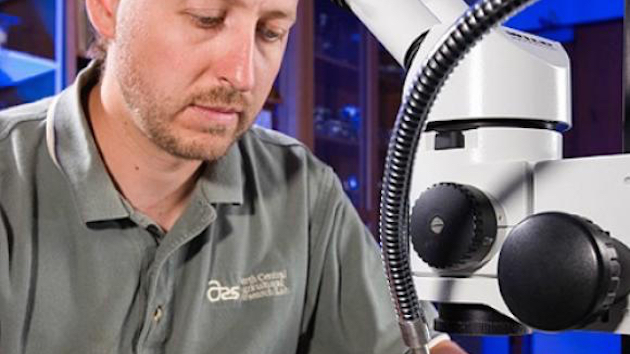 Until fairly recently, Jonathan Lundgren enjoyed a stellar career as a government scientist. An entomologist who studies how agrichemicals affect the ecology of farm fields, he has published nearly 100 articles in peer-reviewed journals since starting at the US Department of Agriculture’s Agricultural Research Service laboratory in Brookings, South Dakota, in 2005. By 2012, he had won the ARS’s “Outstanding Early Career Research Scientist” award, and directorship of his own lab.

USDA scientist Jonathan Lundgren has “gone from golden boy to public enemy No. 1,” says the head of the group representing him.

But recently, things have changed. His work has “triggered an official campaign of harassment, hindrance, and retaliation” from his superiors, Lundgren alleged in an official complaint filed with USDA scientific integrity authorities last year. Lundgren made the battle with his USDA superiors public in October, two months after the agency imposed a 14-day without-pay suspension on him. The charges—laid out in a August 3 letter to Lundgren by John McMurtry, associate director of the ARS’s Plains Area—centered on infractions regarding a trip to the East Coast to present research, and a failure to get proper clearance from his superiors before submitting a paper to a peer-reviewed journal.

Lundgren, who is currently not authorized to speak to the media, has released a detailed rebuttal of those charges in a document put together by Public Employees for Environmental Responsibility (PEER), which is representing him in the dispute.

But there’s no doubting his knack for conducting research that raises troubling questions about some of the agrichemical industry’s most lucrative existing products and promising future ones. “He’s gone from golden boy to public enemy No. 1,” says Jeff Ruch, executive director of PEER.

Before digging into the details of Lundgren’s alleged infractions and punishment, it’s worth having a look at Lundgren’s recent research, which, Ruch says, led him “off the reservation” and into a world of “disciplinary disco.”

In his August 3 letter announcing Lundgren’s two-week suspension, the ARS’s McMurtry declared two topics of Lundgren’s research to be “sensitive”—meaning, he writes, subjects that agency scientists can’t publish or speak to media about without “prior approval at the Area and National Program levels.”

It’s abundantly clear that many of Lundgren’s findings don’t jibe with industry interests.

Now, it’s unclear exactly what makes a topic “sensitive.” Weeks ago, a spokesman for the Agricultural Research Service’s press office told me that he would look up the agency’s formal criteria for sensitivity and divulge it to me. Since then, he has repeatedly declined to answer the question. But it’s abundantly clear that many of Lundgren’s findings don’t jibe with industry interests.

Take neonicotinoids, the globe’s most widely used class of insecticides with annual sales of about $2.6 billion. In a peer-reviewed 2015 paper co-authored with a South Dakota State University professor—the one the ARS accuses him of submitting for publication without proper internal approval—Lundgren found that one common neonic, clothianidin, marketed by Bayer, harms monarch butterflies at levels commonly found in Midwestern milkweed plants, the endangered insect’s habitat and food source. In a 2011 study, Lundgren and his team found that another one, Syngenta’s thiamethoxam, didn’t do much at all to protect soybeans from its target, crop-eating aphids, but did significantly reduce populations of insects that eat aphids.

Then there’s Lundgren’s work on RNA interference, an emerging insecticidal technology that promises to kill targeted insects and weeds by silencing genes crucial to their survival, leaving everything else unaffected. GM seed/agrichemical giant Monsanto has placed great hope in RNAi, as this novel genetic technology is known. In a 2013 paper, Lundgren and USDA colleague Jian Duan noted that the great bulk of the research done on RNAi involves using the technology for human medicine, not to kill specific insects. They also challenged the claim that the technology can target particular pests and leave everything else in the ecosystem alone, and concluded that it’s “largely unknown” how long the RNAi pesticide material would persist in the environment. In 2014, Lundgren served on a panel of independent scientists convened by the Environmental Protection Agency to assess the technology’s risks. The scientists’ report echoed the assessment of Lundgren’s paper.

As Monsanto’s new technology makes its way through the regulatory system, the questions raised by Lundgren are slowing it down. In late October, the USDA quietly greenlighted Monsanto’s RNAi-engineered corn strain designed to kill an insect called the corn rootworm—the first RNAi pesticide product the agency has approved. Because of the odd system the United States uses to regulate new GM crops (explained here and here), the USDA review process doesn’t directly assess the possible impacts that novel pesticides might have on ecosystems, the topic of Lundgren’s research.

That task falls to the Environmental Protection Agency—and the EPA appears to be taking the questions raised by Lundgren quite seriously. Days after the USDA gave Monsanto’s new corn the thumbs-up, the EPA granted it only “limited registration,” which does not allow commercial sale and distribution of the novel corn or its seed. The EPA would not comment on why it declined to fully register the product.

Meanwhile, the USDA declined my request to interview Lundgren on RNAi pesticides in the context of the recent regulatory decisions regarding Monsanto’s corn. “I’m sorry, but Dr. Lundgren is not available for media opportunities at this time,” an ARS spokeswoman told me, after stringing me along for three days.

All of which brings us back to the substance of Lundgren’s dispute with his USDA superiors over violations of travel and publication protocol. According to PEER’s Ruch, both incidents involve the USDA enforcing rules in an extraordinarily exacting standard.

The travel controversy involved a two-stop East Coast trip that Lundgren took in March, to appear on a panel at a National Academy of Sciences conference in Washington, DC, on the role of genetic engineering in pest management, and to address the Pennsylvania No-Till Alliance in Philadelphia.

Lundgren’s trip to present his research to prestigious groups cost him roughly thousands of dollars in out-of-pocket travel expenses and lost wages.

According to Ruch, ARS scientists routinely assume they have de facto permission to present at such prestigious fora. The typical procedure is to file paperwork requesting travel, assume it will be granted, and embark on the trip. In his whistleblower’s narrative, Lundgren acknowledges that he filed his paperwork at the last minute, but adds that such situations are not uncommon—he notes three other colleagues who traveled under similar conditions within six weeks of this trip.

But when Lundgren landed in Washington, he learned that permission for the trip had been denied—and that because of the denial he was officially absent without leave (AWOL) from his post in Brookings. Meanwhile, the National Academy of Sciences and Pennsylvania No-Till Alliance had paid for and booked his travel—a routine situation, says PEER’s Ruch. But since permission for the trip had been denied, Lundberg was in violation of ARS rules for accepting travel expenses without prior approval and obliged to pay them back to the conference organizers out of his own pocket. In all, Ruch says, Lundgren’s trip to present his research to the NAS and Pennsylvania No-Till Alliance cost him roughly $3,000 in out-of-pocket travel expenses and lost wages.

Lundgren’s bosses never provided any reason for not okaying the trip, Ruch says. The ARS declined to comment on Lundgren’s claim that his last-minute paperwork filing was not unusual among the service’s scientists, or that denying permission for a trip to present research was unusual.

Lundgren’s other major infraction, publishing a paper in a peer-reviewed journal without approval from his superiors, follows a similar arc. According to Lundgren, on January 5 of this year, he emailed the paper—on the effect of neonic pesticides on monarch butterflies—to his superior and interpreted her response (which is included in Lundgren’s whistleblower’s narrative) as permission to submit it for publication, based on routines he had followed in his decade at ARS and his prior experience submitting papers to nearly 100 peer-reviewed papers. His superior later said she had never given permission to publish the paper, giving no other reason than it was a “sensitive” topic. The paper, meanwhile, passed peer review and was published in April 2015 issue of the Science of Nature.

Another time, the ARS forced Lundgren to remove his name from a study on which he collaborated, according to South Dakota State University economist Scott Fausti. Under his sole byline, Fausti published a paper in the peer-reviewed journal Environmental Science & Policy in October, teasing out the ecological and economic consequences of the great boom in US corn production that occurred after the government ramped up ethanol mandates in the mid-2000s. Fausti appended this extraordinary footnote to it:

I would like to acknowledge Dr. Jonathan G. Lundgren’s contribution to this manuscript. Dr. Lundgren is an entomologist employed by the USDA Agricultural Research Service (ARS). However, the ARS has required Dr. Lundgren to remove his name as joint first author from this article. I believe this action raises a serious question concerning policy neutrality toward scientific inquiry.

So who’s right, the USDA or Lundgren? There’s always a “he said, she said” aspect to employment disputes. But until the agency articulates what precisely makes a topic “sensitive”—and why a blockbuster pesticide (neonics) and a potential blockbuster pesticide (RNAi) have been so deemed—this looks an awful lot like the case of a public scientist being arbitrarily silenced on matters of intense public interest.