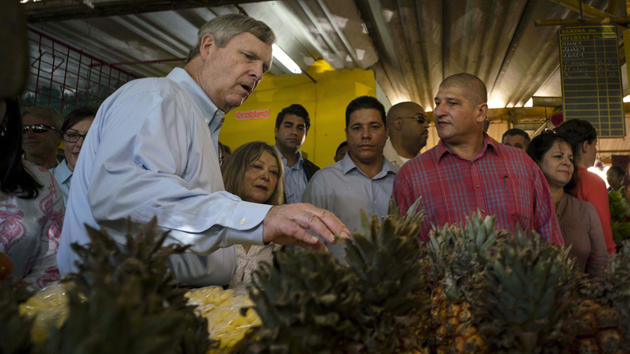 US Secretary of Agriculture Tom Vilsack visits a farmers market in Havana during a four-day official visit to Cuba to try to boost agricultural trade last November. <a href="http://www.apimages.com/metadata/Index/Cuba-US/373993a269c344bea31c854faf90a4ca/4/0e">Ramon Espinosa</a>/AP Photo

When President Barack Obama earlier this week became the first sitting US president to visit Cuba since the revolution, he brought along a veritable army of representatives of US business interests—including agribusiness lobbyists. Among the most prominent was Devry Boughner Vorwerk, a former Cargill executive who now chairs the US Agriculture Coalition for Cuba.

The Coalition launched early last year, soon after Obama announced he would ease trade and travel restrictions imposed by the long-standing US embargo against Cuba, and that he would prod Congress to revoke the trade ban altogether. It’s a conglomeration of grain-trading giants like Cargill (the globe’s largest grain trader and the biggest privately owned US company), Archer Daniels Midland, and Bunge, as well as industry groups including the North American Meat Institute and the American Soybean Association. The group represents what might just be the wedge that will ultimately convince the GOP-led Congress to put aside its staunch anti-communism and agree to lift the embargo: As much as heartland Republican politicians despise the Castro family and all it represents, they love the agribusiness interests that dominate their states.

Before the revolution, the United States and Cuba maintained a robust trade in foodstuffs.

It’s easy to see why US agribusiness has set its sights on the island nation just 90 miles southeast of Florida and quite close to the Gulf of Mexico ports through which most American grain and meat exports flow. Before the revolution, the United States and Cuba maintained a robust trade in foodstuffs. At inflation-adjusted prices, pre-1959 Cuba imported about $600 million worth of US food—mostly meat and rice—according to a 2015 US Department of Agriculture report. Cuba, in turn, sent about $2.2 billion (current dollars) worth of sugar, tobacco, and pineapples our way. But then the revolution launched an era marked by a thwarted CIA-led coup and attempts to assassinate Fidel Castro, culminating in an embargo banning US trade with Cuba.

In 2000, Congress eased the embargo on food exports to Cuba, but in the 15 years since, they’ve rarely reached pre-revolutionary levels. Cuba is reluctant to trade with its old enemy, and lingering restrictions from the embargo make it difficult to do so. While US companies like Cargill are allowed to sell their goods to Cuba, they’re still prohibited from financing the sales with credit—they are required under the embargo’s terms to demand cash up front. That leaves them at a big disadvantage compared with companies from other exporting nations that don’t restrict Cuban trade.

While Obama would like to end the credit restrictions, he can’t do so by executive order. That’s why the US Agriculture Coalition for Cuba is pushing Congress to repeal the embargo altogether. To get an idea of what kind business opportunity post-embargo Cuba might offer US agribusiness, the 2015 USDA report points to another Caribbean island nation with a similar population size and per-capita income: the Dominican Republic. US agribusiness firms export about $1.1 billion worth of goods to the DR annually, representing more than 40 percent of its food imports. In 2014, the USDA reports, US companies exported $286 million worth of food to Cuba, accounting for just 15 percent of its food imports, and less than competitors based in Brazil and the European Union.

So, there’s a lot of money on the table, which might explain why US agribusiness firms are licking their chops at the prospect of open trade with Cuba. But what do the thawing of US-Cuba relations and the potential end of the embargo mean for Cuba’s domestic farms and urban gardens growing vegetable and fruits for local consumption?

“Cuba had learned to stop exporting sugar and instead started growing its own food again,” wrote Bill McKibben.

As readers might remember, necessity forced Cuba to embark on a remarkable experiment in essentially organic, local food production in the mid-1990s—a story explored in-depth by the climate writer Bill McKibben in this 2005 Harper’s piece and by scholar-activist Peter Rosset here. The short version: Until the 1990s, the Soviet Union and other Eastern Bloc nations propped up Cuba’s food supply by sending over boat loads of wheat and rice, as well farm machinery and petroleum-based fertilizers and pesticides, which the communist nation put to use on large, state-run farms. In exchange, Cuba exported its old colonial-era crop, sugar, at a wildly inflated price. When the Soviet Union collapsed, those perks dried up, and Cuba’s sugar exports didn’t earn nearly enough on the open market to maintain the same level of food and farm-supply imports.

The result was what became known in Cuba as “the Special Period.” According to McKibben, citing the Food and Agriculture Organization, per-capita food intake on the island plunged from 3,000 calories in 1989 to 1,900 four years later, the equivalent of removing one meal per person a day. What happened next has been described as an “agro-ecological revolution.” Here’s McKibben:

Cuba had learned to stop exporting sugar and instead started growing its own food again, growing it on small private farms and thousands of pocket-sized urban market gardens—and, lacking chemicals and fertilizers, much of that food became de facto organic. Somehow, the combination worked. Cubans have as much food as they did before the Soviet Union collapsed. They’re still short of meat, and the milk supply remains a real problem, but their caloric intake has returned to normal—they’ve gotten that meal back.

Jullia Wright, a senior research fellow at the United Kingdom’s Coventry University who studies Cuba’s post-Soviet food system, told me that the nation’s urban-farming networks remain highly productive today. The government doesn’t keep precise data on how heavily Cuba’s urban dwellers rely on these operations for food, but they supply a “high percentage” of the leafy greens, fruits, herbs, fresh corn (for human consumption), beans, and small livestock consumed in cities, she says.

Of course, most of what Cargill and its US peers want to export into Cuba doesn’t compete directly with these products—they’re more interested in exporting things like corn and soybeans. At least initially, they’ll be be trying to displace commodity-crop producers in Brazil, Canada, and the European Union, not market gardeners in Havana.

Cuba’s small farmers are “not actively involved in the conversations about the transitions” in the country.

For that reason, the eventual end of the embargo don’t present an immediate threat to Cuba’s small producers, said Miguel Altieri, a professor in the department of Environmental Science, Policy, and Management at the University of California–Berkeley who visits Cuba regularly. “The basic situation hasn’t changed for the peasant movement,” he said. Even if US firms eventually buy land in Cuba to grow export crops—say, pineapples or mangoes—it wouldn’t necessarily affect the smallholder movement, he said, because only about 70 percent of Cuba’s arable rural land is currently in production. So there’s room for both the kind of industrial production that might interest US agribusiness firms and the small operations currently supplying Cubans with fresh food.

The problem, Altieri said, is that unlike those agribusiness lobbyists now on the ground in Havana, the main smallholder groups are “not actively involved in the conversations about the transitions in Cuba.” The first generation of small-scale ag leaders were close to Cuban President Raul Castro—”they could go to Raul and say, ‘Hey, man, don’t forget about us—we’re important,'” he said. But that generation has passed away or retired, and the new leaders don’t have nearly the same access to decision-makers, Atieri said.

With the right policies in place, Cuba’s highly productive small farms could both feed Cuba and earn foreign exchange by exporting, Altieri said. The worst-case scenario is that the small farmers now feeding Cubans will start exporting their crops to the United States en masse to take advantage of higher prices, removing a reliable source of affordable food from the island, he added. He said that such a situation could be avoided if Cuban policymakers put incentives into place to ensure that about a third of farmland remains devoted to providing food to Cubans, but it remains to be seen whether the government views Cuba’s robust domestic food system as an “achievement of the revolution” that’s as much worth preserving and expanding as gains in health care and literacy.

Meanwhile, US Department of Agriculture Secretary Tom Vilsack, who accompanied Obama on his Cuba foray, has articulated a post-embargo vision of Cuba as a major supplier of organic vegetables to the US market. In an interview with Modern Farmer after he led a trade delegation on a trip to the island in November, Vilsack marveled at the productivity of Cuba’s farms, noting the “impressive array of root vegetables,” the “fairly significant garlic production,” and the bounty of citrus and avocados. “I think they just have an unlimited opportunity” for exporting organic produce to the United States, he said.