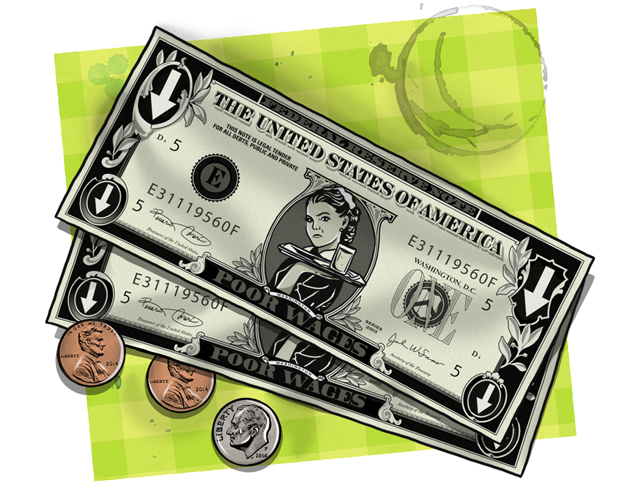 Fresh out of college and working as an unpaid intern for a San Francisco nonprofit, I paid the bills by moonlighting at an Indian restaurant in the Pacific Heights neighborhood. My hostess job entailed long stretches of boredom punctuated by a cacophonous frenzy. There were icy glares from impatient diners and reprimands from managers for drifting from my podium, but compared with most restaurant workers, I was sitting pretty: My hourly rate exceeded California’s minimum wage, I was tipped out by the servers at the end of each shift, and I even received health care benefits—a city mandate.

Very few of America’s 11 million restaurant workers share my story. The federal minimum wage is a paltry $7.25 an hour, but in 18 states servers, bussers, and hosts are paid just $2.13—less than the price of a Big Mac. This is known as the federal “tipped minimum wage” because, in theory, these food workers will make up the difference in tips. Twenty-five states and DC have their own slightly higher tipped minimums. The remaining seven, including California, guarantee the full state minimum wage to all workers.

*Some of the wages shown in the above map are only for large employers.

On the surface, tipping seems little more than a reward for astute recommendations and polite, speedy service. But the practice has unsavory roots, as Saru Jayaraman, a labor activist and author of Forked: A New Standard for American Dining, told me during a taping of Bite, the new food and politics podcast from Mother Jones. The origin of the word is unclear—one theory says “tip” is shorthand for “to insure promptness”; another suggests it’s from 17th-century thief slang meaning “to give.” In any case, European aristocrats popularized the habit of slipping gratuities to their hosts’ servants, and by the mid-1800s rich Americans, hoping to flaunt their European sophistication, had brought the practice home.

Restaurants and rail operators, notably Pullman, embraced tipping primarily, Jayaraman says, because it enabled them to save money by hiring newly freed slaves to work for tips alone. Plenty of Americans frowned upon the practice, and a union-led movement begat bans on tipping in several states. The fervor spread to Europe, too, before fizzling in the United States—by 1926, the state tipping bans had been repealed.

America’s first minimum-wage law, passed by Congress in 1938, allowed states to set a lower wage for tipped workers, but it wasn’t until the ’60s that labor advocates persuaded Congress to adopt a federal tipped minimum wage that increased in tandem with the regular minimum wage. In 1996, former Godfather’s Pizza CEO Herman Cain, who was then head of the National Restaurant Association, helped convince a Republican-led Congress to decouple the two wages. The tipped minimum has been stuck at $2.13 ever since.

This is why restaurant workers today take home some of the lowest pay offered by any industry. Seven of the 10 worst-paying job categories tracked by the Bureau of Labor Statistics (BLS) are in food services. Real median wages for waiters and waitresses are down 5 percent since 2009; cooks saw a decline of 9 percent. 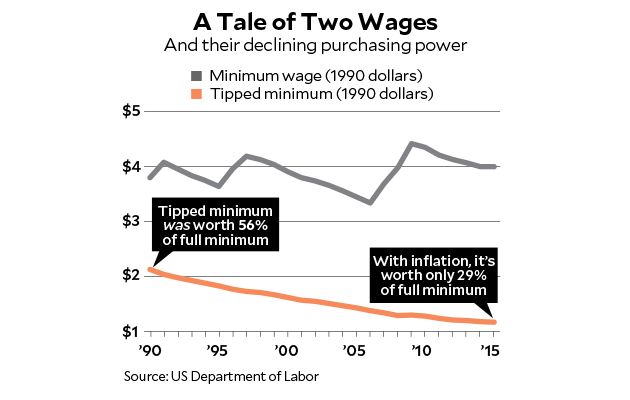 Sure, we occasionally hear about waiters hauling in $80K at posh urban establishments. Those are the stories that corporate players such as Darden, the notoriously stingy owner of the Olive Garden chain, want you to remember. The restaurant association’s website claims the national median take-home pay for tipped servers is $16 to $22 an hour. But those same workers, according to the BLS, made just $9.01 an hour in 2014—poverty wages for a family of four and nowhere near enough to cover rent on the average two-bedroom apartment. (The association says this figure is low because some restaurants report tips improperly.)

America’s two-tiered wage system is hardest on women, who make up 71 percent of tipped servers—waitresses are twice as likely to use food stamps as the general population. And while federal law requires employers to make sure their tipped workers earn at least minimum wage after tips, that rarely happens—from 2010 to 2012, according to the Department of Labor, 84 percent of restaurants were in violation of federal wage law, “which means the women who put food on the tables in America can’t actually afford to feed themselves,” Jayaraman says.

“The women who put food on the tables in America can’t actually afford to feed themselves,” Jayaraman says.

The racist origins of tipping persist, meanwhile, in the take-home wages of nonwhite restaurant workers, who earn 56 percent less than their white colleagues. In one study, researchers at Cornell University and Mississippi College found that customers at an unnamed national chain restaurant—even the black customers—tipped white servers better than black servers. This disparity, the researchers noted, could in theory render the tipped minimum wage unlawful.

Jayaraman says she’s not advocating the end of tipping, just that it take on a different form. Several celebrated restaurants, including Alice Waters’ Chez Panisse and Danny Meyer’s The Modern, have largely replaced tipping with higher menu prices or mandatory service charges. San Francisco’s Bar Agricole tried it, too, but reverted to tipping after servers complained they were making less money. At least they’re working in California, where they’ll never take home less than the current $10-an-hour minimum wage, even if every last table stiffs them.