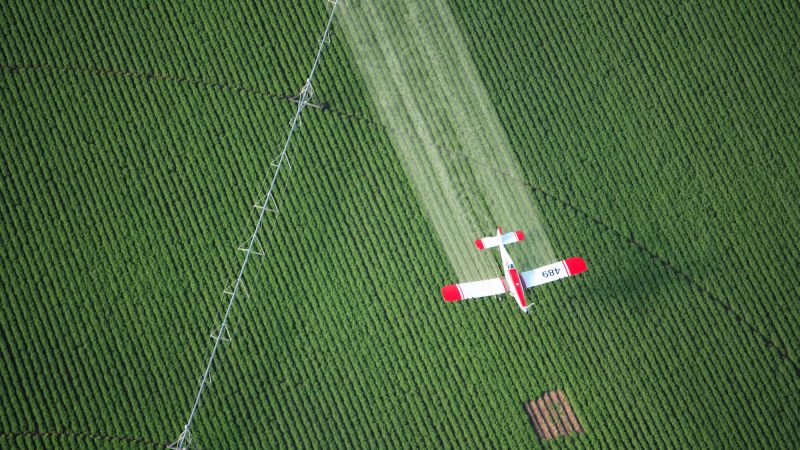 Update (7/19/2016): Monsanto formally rejected German chemical giant Bayer’s latest, sweetened buyout bid Tuesday, issuing a statement calling the offer “financially inadequate and insufficient.” But merger talks will apparently grind on. “Monsanto remains open to continued and constructive conversations with Bayer and other parties to assess whether a transaction that the Board believes is in the best interest of Monsanto shareowners can be realized,” the statement says. Last week, Bloomberg reported that Monsanto is also in talks with Bayer’s rival BASF about a possible tie-up.

“We work to help farmers produce food in a sustainable way,” states Monsanto’s website. “Monsanto uses plant breeding and biotechnology to create seeds that grow into stronger, more resilient crops that require fewer resources.” The company even claims its widely used Roundup Ready crops—genetically modified to withstand the herbicide glyphosate—have allowed farmers to “decrease the overall use of herbicides.”

But does Monsanto actually want to wean farmers off pesticides? Its business maneuvers suggest otherwise. Last year, the company—by far the globe’s market leader in seed sales but just the fifth-largest pesticide purveyor—made an extended bid to buy rival Syngenta, the world’s biggest pesticide producer. By committing $45 billion to buy what amounted to a vast pesticide portfolio, Monsanto seemed to be distancing itself from old claims that biotech seeds would make industrial agriculture less chemical-dependent. The Syngenta deal ultimately collapsed, but Monsanto’s thirst to bolster its pesticide holdings appears to remain strong, as its current merger talks with German chemical giant Bayer show.

Monsanto seemed to be distancing itself from old claims that biotech seeds would make industrial agriculture less chemical-dependent.

Now, it’s true that it’s Bayer trying to buy Monsanto, not the other way around. On May 10 Bayer proposed taking over Monsanto in a deal valued at $62 billion. Monsanto’s leadership formally rejected the bid as “incomplete and financially inadequate,” but declared itself “open to continued and constructive conversations.” In trading Tuesday afternoon, Monsanto’s share price was up more than 2 percent—a sign that investors think Bayer will come back with an offer high enough to tempt Monsanto execs.

But I’ve found something interesting in Bayer management’s formal letter to Monsanto CEO Hugh Grant, which is dated May 10 and was released by Bayer last week. Here’s how the letter opens:

Thank you for taking the initiative to arrange the recent meeting between us on April 18, 2016. I appreciated the opportunity to hear your views on the value of a globally integrated agriculture platform and your vision that a combination of Seeds & Traits, Crop Protection, Biologics, and Digital Farming would be a winning formula.

So, according to this letter—signed by Bayer Chairman Werner Baumann and Liam Condon, president of the company’s crop science division—it appears that it could have been Monsanto that initiated talks about a possible tie-up with Bayer. To understand why that’s interesting requires a little background.

After Syngenta definitively rejected the offer last November, Monsanto was widely rumored to be approaching Bayer and rival German chemical giant BASF, to see if either of those companies might be willing to sell off their considerable pesticide interests.

But a few months later, on April 6—four days before the meeting Grant “initiated” with Bayer, according to the letter—Grant himself publicly announced the company has stopped shopping for a big pesticide buy. On a call with Wall Street analysts, Grant claimed that Monsanto “no longer sees large-scale M&A [mergers and acquisitions] as a likely opportunity.” He added: “Let me be clear. Our strategy is not and was not dependent on large-scale M&A.”

My guess is that Monsanto was trying to talk Bayer into selling off its pesticide unit, and Bayer turned around and said, “No thanks; how about we buy you instead?”

As it happens, I visited Monsanto’s global R&D center in suburban St. Louis on April 8, touring the facility and speaking at length with Robb Fraley, Monsanto’s chief technology officer. I asked Fraley that day whether Monsanto’s quest for a big pesticide acquisition was ongoing. He referred me to Grant’s statement from two days before about how the search was over.

Now we know that while publicly abandoning its push to get bigger, Grant was privately wooing Bayer. We don’t know exactly what Grant had in mind. According to a statement from Monsanto, “The principal purpose of the meeting on April 18 was simply to meet Bayer’s new incoming CEO. As is our policy, we wouldn’t have further details to share of the private meeting beyond that though.”

But we do know that Bayer is a huge player in pesticides—it has an 18 percent share in the global pesticide market, second only to Syngenta.

My guess is that Monsanto was trying to talk Bayer into selling off its pesticide unit, and Bayer turned around and said, “No thanks; how about we buy you instead?”

Again, Monsanto declined to comment on the purpose of the April 18 meeting. A company spokeswoman pointed out that Monsanto’s goal for a while, even before the current wave of industry consolidation, has been to act as an “integrated solutions approach for growers”—that is, it wants to be able to offer farmers a complete, one-stop package: seeds, GM traits, pesticides, and advice on how to deploy it all, through its “digital farming” arm.

If Bayer’s bid ends up being successful, it will be the latest marriage in a mating frenzy among the handful of companies that dominate the global seed and pesticide markets. Syngenta fled Monsanto’s embrace and jumped into the arms of ChemChina, the Chinese behemoth, instead. And late last year, US chemical giants Dow and DuPont agreed to merge and announced a plan to spin out their combined agribusiness holdings. If the deal passes regulatory muster, DowDuPont’s agribusiness arm will be the globe’s biggest seed/pesticide company.

Before the consolidation craze started, the same six companies controlled about more than 70 percent in the global markets for seeds and pesticides, according to the watchdog ETC Group. If Bayer gets its way, there will only be four. And that will give the remaining firms unprecedented power to decide what farmers grow and how they grow it.