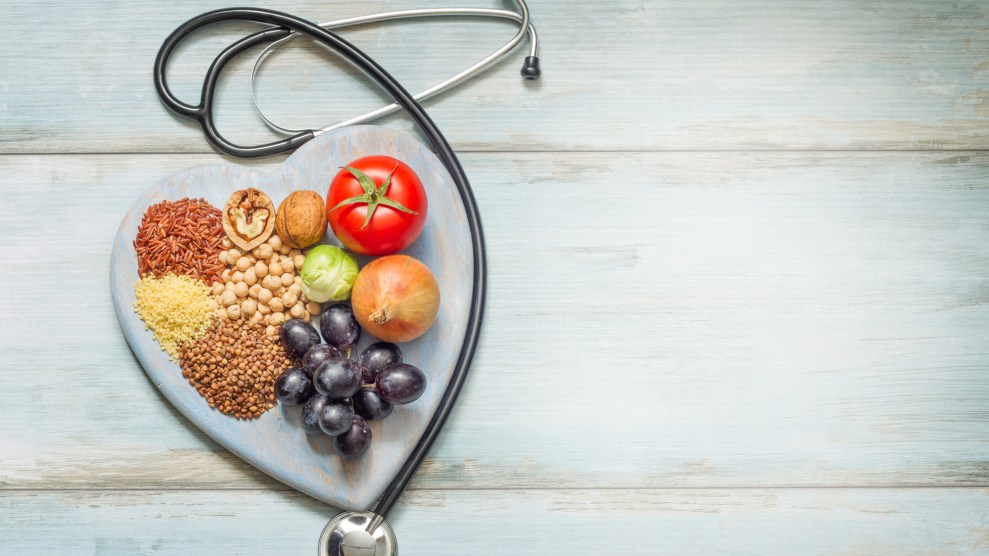 It’s not exactly news that fruits and veggies are good for you. But historically, physicians have been reluctant to make any diet recommendations at all to their patients. Medical schools don’t teach much about nutrition.

Andrew Freeman, a cardiologist with National Jewish Health hospital in Denver, Colorado, says that doctors often worry that patients will balk at the idea of radically altering what they eat. But that’s slowly changing: Freeman, who follows a vegan diet himself, now recommends a “plant-based diet” to his patients. He talks more about this decision on this week’s episode of Mother Jones‘ food politics podcast Bite:

A number of mainstream medical groups now endorse vegetarian (or vegetarian-ish) diets, including the American Cancer Society, the American Institute for Cancer Research, the Academy of Nutrition and Dietetics and, over protests from the meat industry, the USDA group that issues dietary guidelines. In 2014, the American College of Cardiology elected its first ever vegan president, Dr. Kim A. Williams. In 2013, Kaiser Permanente, the nation’s largest healthcare network, asked its physicians to suggest a plant-based diet to their patients. Just this week, the American Medical Association passed a resolution recommending that hospitals offer patients non-meat meals.

Dr. James Loomis, an internist who directs the Barnard Medical Center in Washington, D.C., says that over the past few years he has noticed a growing willingness among his colleagues to prescribe vegan and vegetarian diets to patients. “I am being invited to speak about this at mainstream medical conferences about diabetes and heart diseases,” he said. “That never would have happened five years ago.” He said that when he attended the first International Plant Based Healthcare Nutrition Conference five years ago, about 250 people showed up. This year, the group expects attendance to exceed 1,000.

One reason that doctors are coming around to the idea of recommending plant-based diet: The evidence that it promotes health is getting stronger. Freeman was the lead author on a study earlier this year that reviewed a handful of diet trends. The only one that showed any health benefits was the plant-based diet. Last year, a large study published in the journal JAMA Internal Medicine tracked the dietary habits and disease outcomes of more than 130,000 people. It found that people who got their protein from sources other than meat had a significantly lower risk of dying from heart disease than their meat-eating counterparts. (It’s worth noting that in this study, the effect was only observed in people who had one other unhealthy lifestyle factor like smoking or obesity). The most recent issue of the Journal of Geriatric Cardiology is devoted research on plant-based diets; it includes studies on diabetes, stroke, hypertension, and more.

To hear more about doctors’ changing beliefs about meat-free diets, listen to this week’s episode of Bite. Also included: an inside look at the companies who are racing to invent the perfect fake meat.

Bite is Mother Jones’ food politics podcast. Listen to all our episodes here, or by subscribing in iTunes or Stitcher or via RSS.