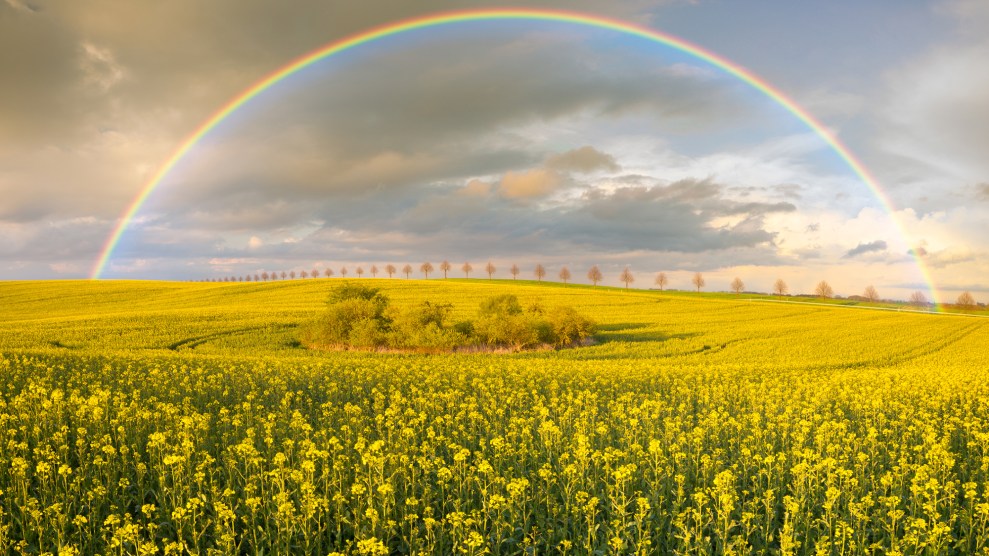 Do you feel overwhelmed by gloomy news? You’re not alone. In our latest episode of Bite, we talked with Naomi Starkman, editor-in-chief of the food news website Civil Eats, which often highlights the bright spots in an otherwise bleak news landscape. Starkman admits it can be hard to find genuinely upbeat stories in these politically chaotic times—but she believes that the food world is a great place to look for them. “Food is a very powerful story to tell,” she said. “And there are so many untold stories.” You can hear about some of them in the episode:

Here are a few more news items worth cheering about:

States take a stand against one nasty pesticide: State attorneys general are pushing to ban chlorpyrifos, a pesticide that has been associated with brain damage in kids. Back in March, the EPA ruled there was insufficient evidence to justify a ban on the stuff—backtracking on its own proposal. (My colleague Tom Philpott wrote about the pesticide here.) Now, Reuters reports that state prosecutors in Maryland, Vermont, Washington, Massachusetts, New York, and Washington, DC, filed a lawsuit on Thursday, challenging Environmental Protection Agency chief Scott Pruitt’s decision.

Ag ungagged: On Friday, Utah declared its ag-gag statute—which prevents journalists and activists from documenting abuse at slaughterhouses and factory farms—unconstitutional. It is the second state to make such a move; Idaho struck down its ag-gag law in 2015. Animal advocacy groups cheered the latest decision. “Ag-Gag laws are flagrant attempts to hide animal cruelty from the American people,” said Stephen Wells, executive director of the Animal Legal Defense Fund, in a press release. “They unfairly target activists trying to serve the public’s interest.”

Spotlight on school lunch shaming: Earlier this year, New Mexico became the first state to outlaw “school lunch shaming,” making it illegal to turn away kids with unpaid lunch bills. Soon, the rest of the country may follow suit: The Washington Post reports that new language has been proposed for a federal bill that would bar schools from discussing outstanding payments with children.

Investors tell companies to stop making climate change worse: First they pressured companies like Exxon Mobile to disclose how their oil sourcing is affecting the environment, and now they’re taking aim at food companies. When it comes to ingredients like palm oil, soy, beef, or corn, shareholders want to know where and how these products are being sourced, and whether it’s leading to climate problems like deforestation. Inside Climate News tells the story of some of their most successful campaigns. Last year, for example, industry giants Kellogg, Nestlé, and Unilever ceased working with a palm oil producer when told the company wasn’t meeting sustainability standards. In 2011, there were 12 shareholder resolutions filed with food and beverage companies when it comes to climate risk. This year there are 131.

Michelle Obama’s White House garden will keep growing: The Trump administration hasn’t shown much interest in former first lady Michelle Obama’s White House garden, but the New York Times reports that “those outside the White House who support the garden are seeking creative efforts to keep it an East Wing priority.” One big win: Last October, the National Park Foundation received a $2.5 million donation to continue working on the garden. The White House said the produce will be used for in-house meals and the rest will be donated. Since Michelle Obama started the garden in March 2009, it has grown to churn out about 2,000 pounds of produce each year.

22,000 pounds of produce: That’s how much the Refugee Empowerment Agricultural Program plans to harvest this year. The group, based in Cleveland, works on one of the nation’s largest urban farms and provides resettled refugees with English-language classes and work on farms. Civil Eats has the story here.