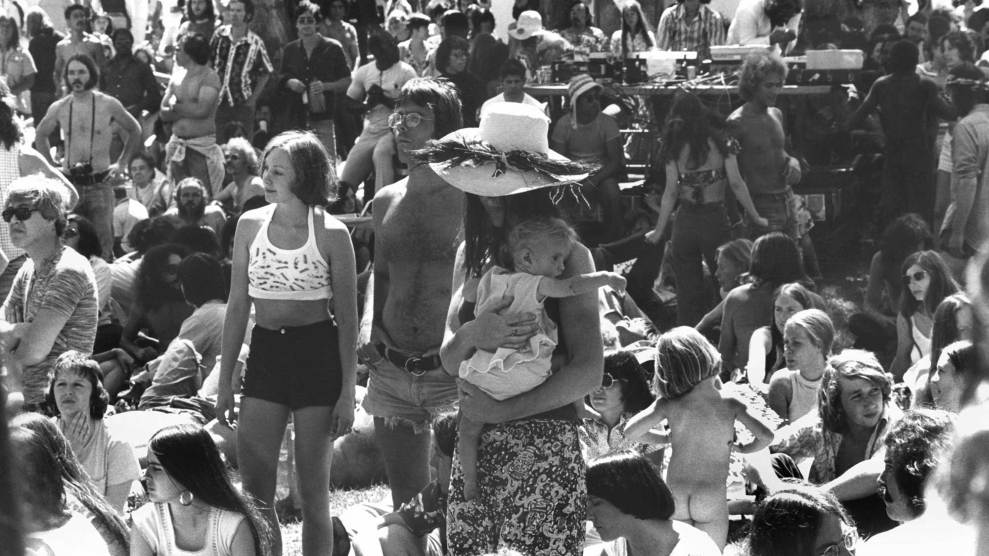 A pop music festival in San Francisco in the early 1970s. Roland Witschel/AP

Toward the end of the 1977 classic film Annie Hall, Woody Allen’s straight-laced character squints at the menu of an ultra-groovy Los Angeles restaurant before submitting his order: “I’m going to have the alfalfa sprouts and a plate of mashed yeast.”

Hippie food, the rough-and-tumble cuisine that sprouted from 1960s counterculture, has been making us chuckle ever since. But as our guest on the latest Bite podcast, Jonathan Kauffman, shows in his soon-to-be-released history Hippie Food: How Back-to-the-Landers, Longhairs, and Revolutionaries Changed the Way We Eat, the hippies may enjoy the last laugh. Alfalfa sprouts aren’t exactly having a moment, but many of today’s hottest food trends are rooted in the tofu revolution. Here are a few:

• Avocado toast.* If you’ve dined at any trendy coffee shop in the last year, you’ve probably enjoyed a ripe avocado mashed and spread onto a warm slice of toasted whole-wheat bread. This au courant delicacy is as rooted in the hippie tradition as those Birkenstocks you wear around the house. Kauffman reports that at the ’60s-era LA health-food hot spot the Aware Inn—sister to the Source, where Woody ordered that apocryphal plate of mashed yeast—they served “moonshine-whiches”: sprouts and avocado on soya bread. Indeed, the avocado-sprout sandwich, sometimes goosed with havarti cheese, was a hippie staple. And of course, without the backlash against squishy white bread the freaks helped spearhead, you’d never have access to the artisanal whole-wheat bread you now enjoy under that delicious avocado.

• “Vegetable-forward” cooking. For years, food journalists have reported that high-end chefs are getting more creative with vegetables and pushing meat from its exalted position. This year is no different. “On restaurant menus, sprout by sprout, root by root, plants are gradually upstaging meat and moving to the center of the plate,” reports Epoch Times. Score another one for the longhairs, who have been vegetable-forward since bell bottoms were a novelty item. In our interview, Kauffman talks about what he sees as the movement’s greatest victual legacy: “They came up with an idea of how to cook a healthy everyday diet—simple, healthy recipes that featured whole grains and a lot of vegetables and fruits, and lower in meat,” he says. The idea that those foods were good for you, Kauffman adds, wasn’t embraced by a lot of nutritionists before the 1970s.

• Plant-based protein. “Whether with pulses, shoots, grains, seeds, soy or even algae, everyone from tiny start-up companies to big brands is looking for clever new ways to add a protein punch,” declares the UK supermarket chain Waitrose in its 2018 trend report. Ya don’t say. Hippies have been fixated on plant proteins since Frances Moore Lappé published Diet for a Small Planet way back in 1971. The book was an alt-food landmark, Kauffman notes, inspiring generations to go vegetarian. It provided a critique of meat production that holds up today: Why waste grains and beans by feeding them to cows when we can just eat them ourselves?

• Grain bowls. “Our love for grain bowls knows no bounds,” Bon Appetit announced in 2015. “Composed of, well, grain—rice, farro, barley, quinoa, kamut, you name it—and topped with veggies, a protein, and a dressing, grain bowls are the easiest way to make and eat a hearty yet light meal we can think of.” Since then, they’ve gotten so huge that Consumer Reports was moved to rank the best ones available at supermarkets and fast food chains in 2017. According to Kauffman, they are a direct descendant of the macrobiotic craze that first took root in the United States in the 1960s. Indeed, the dish he names as the hippie food par excellence—tofu stir fry with brown rice and veggies—is itself a grain bowl. So when you queue up at a Sweetgreens for your midday bowl, hug a hippie.

• Energy bars. Next time time you rip open a Clif or Kind bar, you might want to take a deep bow in the direction of Los Angeles, where a robustly bearded, ripped fellow called Gypsy Boots once held court as a health-food hawker and author starting in the late 1940s. Proto-hippies, Boots and his longhaired, bearded crew—known as the Nature Boys—would hang out at Venice’s Muscle Beach, handing out fruit and nuts to passersby, while they proselytized the power of raw vegetables, Kauffman reports. The tambourine-packing Boots was the group’s clown and troubadour. He eventually opened an influential restaurant called the Back to Nature Health Hut and by the mid-’60s, he was peddling Boots Bars, which Kauffman characterizes as a mix of sesame sunflower seeds, honey, and dried fruit.

• Yeast! Back in 2015, Vogue food writer Mackenzie Wagoner was moved to ask, “What is the deal with nutritional yeast?” The stuff had taken Manhattan by storm, she found. “The subtle flavor, which some liken to cheese, is precisely what chef Gerardo Gonzalez had in mind when he topped off El Rey’s vegetarian chicharrones with a ‘heavy dusting’ of nutritional yeast.” In reality, its star has been been shining since the pre-hippie health-food craze of the 1950s, Kauffman notes, when a popular Los Angles-based health-and-beauty guru named Gayelord Hauser named it one of five “wonder foods.” Last year, the Well & Good called nutritional yeast the “OG vegan protein supplement” and the “latest old-is-new-again craze”; and Fine Dining Lovers warned that diners in 2018 should look out for “yeast sprinkled like sugar—get ready!” No reports of mashed yeast being consumed by the plateful—yet.

*Thanks to some of our Twitter followers for reminding me that people from Mexico and other places that grow avocados have been consuming and popularizing them in the United States for many decades and deserve some credit for the avocado toast craze. That makes sense to me. I should also note that the tie between hippies and avocado toast specifically comes from me, and not from Kauffman or his book.