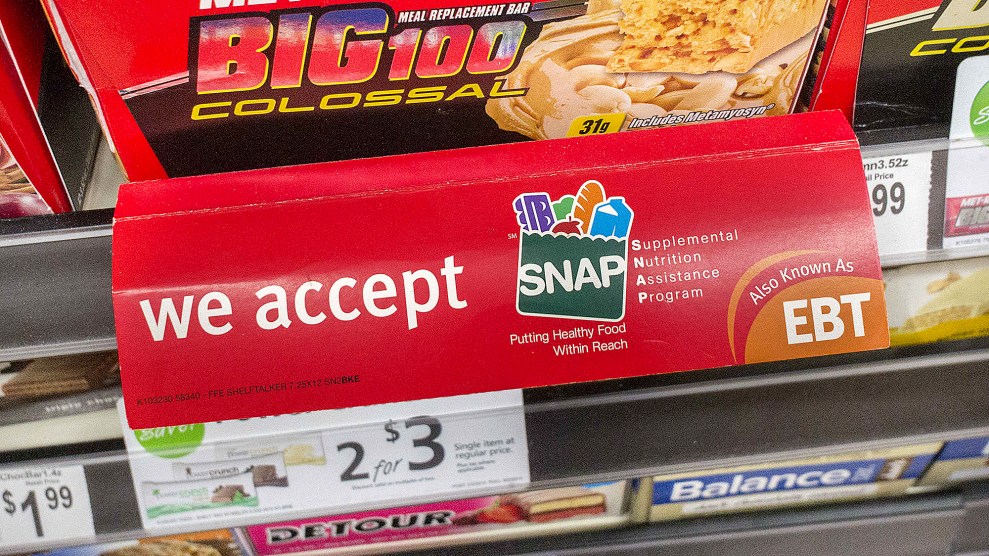 A sign on a sales rack of an energy bar in a 7-Eleven in New York promotes the convenience store's acceptance of the SNAP (Supplemental Nutrition Assistance Program).Richard B. Levine/Newscom/ZUMA

The Trump administration is officially considering work requirement rules for recipients of the Supplemental Nutrition Assistance Program (SNAP), commonly known as food stamps, a US Department of Agriculture (USDA) spokesperson said Thursday. The move has been anticipated for months and marked by a December press release from the USDA promising to promote “self-sufficiency” and give states greater control over the program, which serves millions of Americans and families across the country.

Requiring that poor Americans work to receive welfare aid has been a part of the GOP rhetoric for years and is being pushed particularly hard by the Trump team, which has criticized recipients it says are exploiting the system. “If you are on food stamps and you are able-bodied, we need you to go to work,” Director of the Office of Management and Budget Mick Mulvaney said last year.

But the program’s eligibility requirements are already stringent. Currently, able-bodied adults without kids, known as ABAWDS, can only receive food stamp aid for three months in a three-year period unless they are working 80 hours per month or participating in an employment-training program.

However, USDA Administrator of the Food and Nutrition Service Brandon Lipps, who led the call on Thursday, stressed that not everyone is adhering to those stipulations—and that’s a problem. “There is a waiver process that is allowing this population not to reach those work requirements,” Lipps said. “That’s one of the issues that we’re looking for input on.”

The Trump administration has been taking aim at SNAP for nearly a year now, starting when his May budget proposed a 25 percent cut to the program. “The conversation on this population [ABAWDS] has gone on for a really long time,” Lipps said this morning. “We want everyone to give input on how we move this population forward to self-sufficiency.”

What the Trump administration doesn’t say is that the majority of adults receiving food stamps either already work or are looking for work.

And meanwhile, some states are moving forward on tightening work requirements, with or without the federal government. On Tuesday, the Wisconsin Senate passed a series of welfare bills, including one limiting food stamps access by increasing the hours recipients have to work or attend job training to receive aid past 90 days. “Rewarding work” is one of Governor Scott Walker’s top priorities this year, he said in a January radio address, stating that “public assistance should be a trampoline, not a hammock.”

“Long-term dependency has never been part of the American dream,” US Agriculture Secretary Sonny Perdue said in a press release sent out after the call. “USDA’s goal is to move individuals and families from SNAP back to the workforce as the best long-term solution to poverty. Everyone who receives SNAP deserves an opportunity to become self-sufficient and build a productive, independent life.”

Public comment will be available here starting Friday through April 9, 2018.