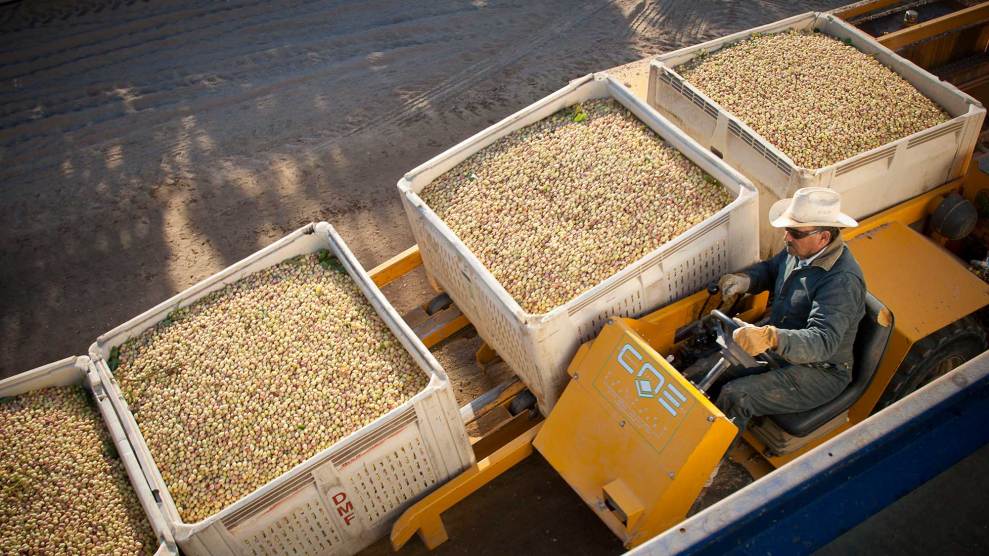 A pistachio farmworker lines up bins on a farm in in Madera, Calif. The state exports more than half of its $2.1 billion pistachio crop every year. Justin Kase Conder/AP

Earlier this month, as President Donald Trump escalated the threat of a trade war with China, US Treasury Secretary Steven Mnuchin vowed to “protect our farmers from unfair targeting” by Chinese tariffs in a CNBC interview on April 6.

Mnuchin didn’t mention how the administration would counteract tariffs as high as 25 percent imposed on US agriculture goods. But there’s no mystery as to why the former investment banker would single out farmers for defense in this tariff war. The United States exports $21 billion in agricultural goods to China. And in striking back against Trump’s metals tariffs, China has targeted US farm products like soybeans, pork, nuts, and tobacco for retribution.

In a story I wrote a few days ago, I showed that fallout from the hostilities will likely hurt the Republican Party in the heartland, where Trump enjoyed strong support in the 2016 election. A squeeze by China will also cause pain among Trump supporters on the coasts.

Take California. Two-thirds of California’s $5 billion almond crop go to foreign markets, and China is the second-leading destination after Spain. More than half of the state’s $2.1 billion pistachio harvest is exported. China announced a 15 percent tariff on both nut crops last week, along with a range of other products it imports from the Golden State: wine, walnuts, table grapes, and raisins.

California is generally a Democratic state—Hillary Clinton out-polled Trump by nearly 30 percentage points there. But 14 of the state’s 53 US congressional representatives are Republicans. And China’s ag tariffs represent an almost surgical strike against them. Check out California’s congressional delegation map:

Now check out the region where the state’s $5 billion almond industry—which exports two-thirds of its product—keeps its groves: in the deep-red Central Valley that runs down California’s middle.

The fates of two GOP House stalwarts in particular hang in the balance. Rep. David Valadeo represents the heart of almond/pistachio country around Bakersfield in parts of Kern, Tulare, Fresno, and Kings counties. Rep. Jeff Denhem presides just a bit to the north, in a district centered in Stanislaus County. Both land in Cook Political Report’s list of the most competitive congressional races in the US.

Across the country, in perennial swing state North Carolina—where Trump beat Clinton by less than 3 percentage points—China’s tariffs fall hard on the state’s top two ag exports: pork and tobacco. China and Japan are the two leading recipients of the state’s $4 billion in ag exports, each taking in 16 percent of the total. “North Carolina exported more than $156 million in leaf tobacco to China in 2017, making the nation the largest consumer of the state’s tobacco in the world,” the Raleigh News and Observer reports. “That number is already down from more than $184 million in 2015 and $166 million in 2016.”

Hog and tobacco production are both highly concentrated in the state’s eastern half—the heart of Trump country in the state.