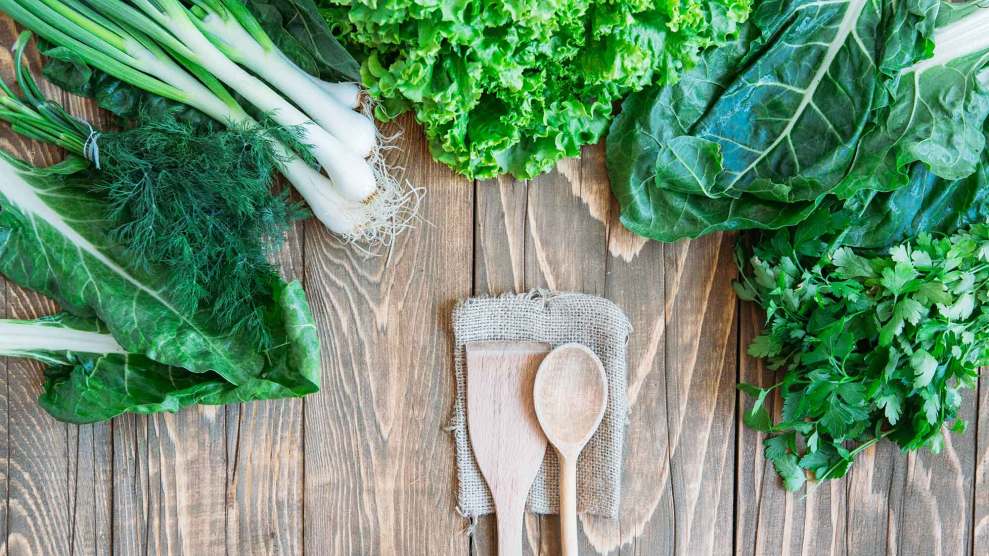 On a trip to Los Angeles about a year ago, I started seeing savory chickpea pancakes everywhere: first as an appetizer at the tiny, excellent Silver Lake restaurant Mh Zh; then, served as a simple dinner in the home of some friends in Glendale, while their young children held court.

It’s called socca—a delicacy native to the Provence region of France and to the Ligurian coast of Italy (homeland of pesto), where it’s known as farinata or torta de ceci. There’s a similar dish in the Gujarat region of India called pudla. As my friends demonstrated, making this delicious pancake is dead simple.

Socca is gluten-free, vegan, and loaded with protein from those pulverized chickpeas.

The only unusual ingredient is chickpea flour (also known as garbanzo bean flour or besan), typically available in health-food or South Asian stores (and if not, can be mail-ordered). Once you’ve snagged some, you’re always a few steps away from a crowd-pleasing, versatile main dish, with no more effort necessary than stirring up a batter and figuring out a nice topping. For those who care about such things, socca is gluten-free, vegan, and loaded with protein from those pulverized chickpeas.

We’ve been making it ever since those LA encounters, guided by recipes from the excellent vegan cookbook author Gena Hamshaw and American-in-Paris kitchen master David Lebovitz. The basic formula is chickpea flour, water, salt and olive oil. Following Provence tradition, Lebovitz spikes his socca batter with cumin and serves the dish plain, “with an apéritif before dinner.” I like to add a little sautéed onion to the batter and serve slices topped with sautéed vegetables for a deeply satisfying meal.

You can keep it simple and go with a plain batter and no toppings, or add flavorings to the batter and/or elaborate sauces and toppings at the table. The possibilities are endless. For a light recent supper, here’s what I did.

Preheat oven to 450 F, positioning a rack five or so inches beneath the broiler.

First, put together the batter. In a small or medium-sized bowl, combine the chickpea flour, water, salt and pepper, and two tablespoons of the olive oil, and stir or whisk until it forms a smooth batter (a few small lumps are okay).  Allow the batter to sit for at least 20 minutes, and up to 12 hours.

Meanwhile, turn heat to medium under a heavy-bottomed, oven-proof skillet, preferably cast iron. Add a tablespoon of olive oil, the white part of the onions, and the cumin. Sauté, stirring frequently, until the onions are soft. Add the onion greens and cook until they wilt, which won’t take long. Remove from heat, put the onions in a small bowl, and wipe out the skillet. Now place the skillet in the heating oven, so it gets good and hot.

When the oven has come to temperature and the skillet is hot, remove it with a pot holder, and add the final two tablespoons of olive oil to the hot pan. Swirl it all around the pan so that the entire bottom and an inch or so of the sides are coated. Add the reserved cooked green onions to the batter and give it a final stir, then gently pour the batter into the hot pan, swirling to even it out, and return to the oven, setting the timer for 15 minutes.

While the socca is baking, make the topping. To cook the chard, set heat to medium-low under another heavy-bottomed skillet and heat a tablespoon of olive oil. Add the garlic and the chili flakes and cook, stirring frequently, until the garlic releases its perfume, about 30 seconds (taking care not to let it brown). Add the chopped stems, stir, and let them cook for a minute or two, covered. Add the chopped chard greens and the salt, stir, and let cook, covered, until the chard is wilted and tender. Remove the lid and let it cook for a minute to get rid of any excess liquid. Add a dash of vinegar to taste, stir, and set aside.

Check the socca after 15-20 minutes—it will likely be set at the edges but pale on top. Put the broiler on high and give it a couple minutes under close watch, until it is crisp and golden brown.

Slice the socca into wedges and serve topped with chard and a little grated cheese.