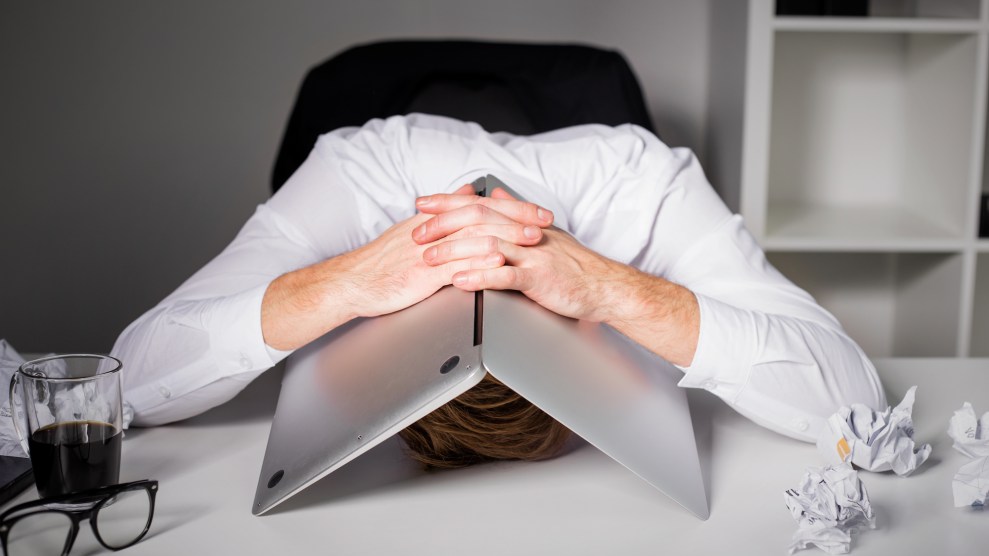 It’s happening again. In states from Mississippi to Indiana, some US soybean farmers are seeing a troubling sight: Previously healthy plants begin to look wan, their leaves puckering into a cup-like shape. Similar symptoms are hitting trees, ornamental and garden plants, flowers, berries, and vegetables.

If the story sounds familiar, that’s because cupped leaves and the angry farmers who tend them are emerging as a recurring summer saga in the Heartland as swaths of land are exposed to errant mists of the potent herbicide dicamba. The pesticide is marketed by Monsanto, the erstwhile US seed/pesticide giant which will soon be subsumed into German chemical behemoth Bayer. And as Bayer integrates Monsanto, it’s also inheriting the smaller company’s dicamba mess.

For three years now, Monsanto has been hotly marketing a product called Roundup Ready 2 Xtend—soybean seeds genetically tweaked to produce crops that can withstand both dicamba and another herbicide, glyphosate (Roundup). The company’s “Roundup Ready” glyphosate-tolerant crops, released in the mid-1990s, became so ubiquitous in US farm country, and the chemical became so widely used, that weeds evolved to withstand it. Now, the company is pitching its dicamba-ready seeds as the answer to the declining effectiveness of its glyphosate-tolerant products.

In hot weather, dicamba is prone to volatizing—that is, turning into a gas and moving in the air to nearby fields, where it can cause unintended damage.

Until 2016, dicamba was seldom used on farms after May, because by then, crops had fully emerged from the ground, and they’d be vulnerable to dicamba. But there was also another good reason not to spray it in high summer: In hot weather, dicamba is prone to volatizing—that is, turning into a gas and moving in the air to nearby fields, where it can cause unintended damage.

Engineering crops to be resistant to dicamba solved the first problem. To address the second one, Monsanto came up with a dicamba formulation—called “VaporGrip”—it said would be much less volatile than the old versions.

In 2016, the company debuted its Roundup Ready 2 Xtend soybeans seeds, and pioneering farmers planted the dicamba-ready legumes on about about 1 million acres—a tiny portion of the 85 to 90 million acres typically devoted to the crop. The catch was that the EPA had not yet approved the new VaporGrip dicamba mix, and the older formulations were not approved for use during the hot summer months. So farmers who bought the seeds weren’t supposed to spray dicamba on the resulting crops—something Monsanto says it made clear to buyers. But some of them apparently did so anyway, because neighboring landowners began to complain about damage to their own crops. In early August of that year, the Environmental Protection Agency announced it had gotten an “unusually high number of reports of crop damage that appear related to misuse of herbicides containing the active ingredient dicamba.”

By planting time in 2017, the EPA had given the green light to Monsanto’s “Vaporgrip” dicamba mix. Farmers went wild for the dicamba-tolerant soybeans, planting them on 20 million acres. By June, once again, reports of damaged crops began rolling in. By the end of the growing season, more than 3.5 million acres of soybeans in more than 20 states had been damaged, as well as untold acres of shrubs, trees, vegetables, and lawns. Kevin Bradley, a University of Missouri weed scientist who tracked the destruction nationwide, was stunned. “In my opinion,” he wrote in August 2017, “we have never seen anything like this before; this is not like the introduction of Roundup Ready or any other new trait or technology in our agricultural history.”

Monsanto, for its part, denied responsibility, blaming the problem on farmers who had failed to apply dicamba as directed on the product’s notoriously complex and restrictive label. Weed scientists at universities throughout the south and Midwest argued that the chemical is extremely tricky to hold in place during the hot summer months, regardless of formulation. By December, several states had placed limits on dicamba use, ranging from Arkansas’ ban on applying the chemical after April 16  to Missouri’s ban after July 15.

If the off-target damage problem doesn’t end, the agency will consider revoking its approval of Monsanto’s dicamba formulation.

The Trump EPA, not exactly known for its harsh regulation of pesticides, moved in October 2017 to require that the new dicamba formulation can only be sprayed by trained applicators and also further tightened label restrictions (for example, it can now only be applied when wind speeds are below 10 mph, versus 15 mph previously). The administration also planned to “monitor the success of these changes to help inform our decision whether to allow the continued over-the-top use of dicamba beyond the 2018 growing season.” Translation: If the off-target damage problem doesn’t end, the agency will consider revoking its approval of Monsanto’s dicamba formulation.

That would be a blow to Monsanto, which in 2016 announced a $975 million project to expand its dicamba plant in Luling, Louisiana. In an October 2017 note to investors, the company projected that its dicamba-ready soybeans would ultimately conquer 80 million acres of farmland, delivering the company at least $5 per acre in revenue more than current varieties—a windfall of $400 million annually.

So there’s a lot of money riding on whether dicamba stays where it’s intended to this year. Early results aren’t looking great, according to weed scientists. In a June 21 post, the University of Missouri’s Bradley reported that “as of June 15th, university weed scientists estimate that there are approximately 383,000 acres of soybeans injured by dicamba thus far in 2018.” Other crops, too, are showing signs of damage, he reports:

I have personally witnessed this increasing problem of off-target dicamba injury to “other” crops and tree species in the calls I have received, field visits, and “windshield surveys” of Missouri that I have taken the past few weeks, especially when driving around southeast Missouri last week.

To get Monsanto’s perspective, I talked to Ryan Rubischko, the company’s North America dicamba portfolio lead. “From an overall standpoint, the feedback we’re getting [from growers] is quite positive,” he said. Rubischko noted that more than 94,000 herbicide applicators had gone through special training for chemical application since the 2017 growing season. And the company has set up a hotline to take reports of suspected off-target damage—only 55 have come in so far, Rubischko said. Every one of them, he added, proved on investigation not to be the company’s fault, but rather damage caused by an applicator who failed to follow the dicamba label or by another cause altogether.

Like last year, the company appears to be on a collision course with independent scientists over its blockbuster pesticide. And now it’s Bayer, a chemical company most famous in the United States for its aspirin, that will inherit the headache. For dicamba-using farmers and their neighbors, 2018 is shaping up to be yet another long, hot summer.