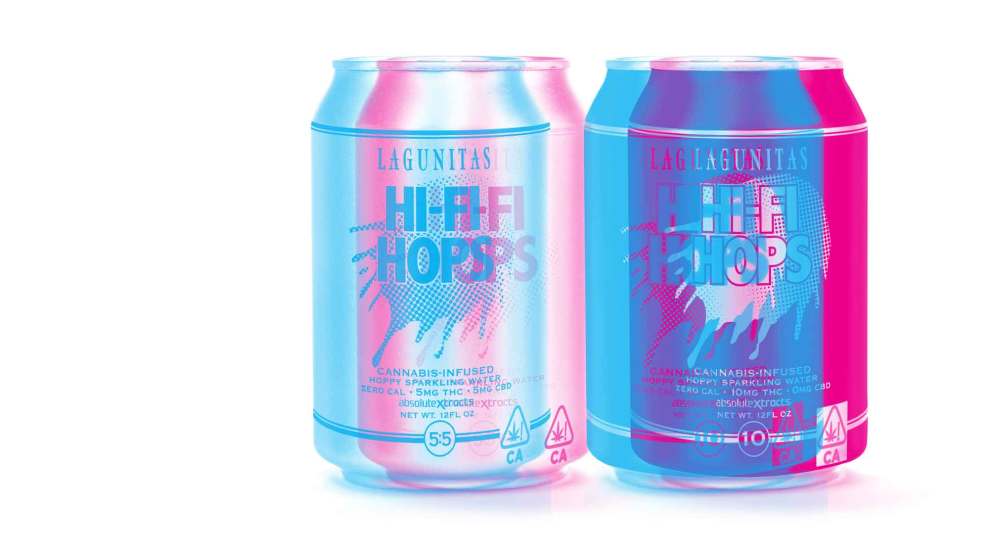 Marijuana’s slow but steady legalization across the United States has meant the joints, pot brownies, and bongs of your college days have given way to high-tech vaping, single-origin “special” chocolates, and haute-cuisine cannabis dinners. And at least one beer now contains cannabidiol, or CBD, the non-psychoactive chemical found in both cannabis and hemp. Coalition Brewing, an Oregon-based craft brewery, started marketing a CBD beer called Two Flowers IPA in late 2016.

Now, some companies are combining beer with tetrahydrocannabinol, or THC, the main chemical in cannabis that gets you high. Brands like CERIA Beverages—co-founded by the creator of Blue Moon Brewing Company, Keith Villa—and Two Roots Brewing Co. removed the alcohol from their craft beers and replaced it with THC. Lagunitas Brewing Company released a THC-infused sparkling water called Hi-Fi Hops in California on Monday. All of these drinks will be sold at marijuana dispensaries.

Two Roots and CERIA Beverages are not alcohol manufacturers so they don’t have to contend with the Alcohol and Tobacco Tax and Trade Bureau (TTB), which must certify alcoholic drink formulas before they’re sold. But Lagunitas is: So while the Hi-Fi hop-water uses Lagunitas’ branding, the company turned to a cannabis producer and distributor called CannaCraft to add the THC and sell the beverage.

Lagunitas’ website notes that the company “does not cultivate, manufacture, distribute, or sell any cannabis product.” As Ron Lindenbusch, Lagunitas’ chief marketing officer, explains: “Basically, once [CannaCraft takes] the hop-water, they keep all the profits from there.”

Jamie Evans, founder of a gourmet cannabis lifestyle brand and blog called The Herb Somm, thinks that alcohol companies jumping into the cannabis market is smart, regardless of short-term profit or lack thereof. “Once cannabis becomes federally legal…companies like Lagunitas will have made a name for themselves and will have brand recognition in the infused beverage category,” she wrote in an email. Evans also mentioned that there’s new support for federal legalization from alcohol industry trade groups and alcohol manufacturing companies, suggesting an interest in cannabis experimentation.

“We said, ‘let’s mimic the alcohol industry’ because people are already geared towards socializing with alcohol,” said Villa, the Blue Moon Brewing Company founder who plans on launching his THC-infused beverage late this year or early next. “This is something that’s—we think—a true game changer,” he said. And Villa hopes that consumption rules will change so that people can drink THC beers in bar-like settings.

Rebecca Stamey-White, an attorney focused on alcoholic beverage and cannabis marketing, thinks this could be on the horizon. “Every state that has a legal cannabis program deals with on-premises consumption a little bit differently, with most not permitting it,” she said. “So I think that’s the next area where we’ll see more boundaries pushed.”

Craft brewers have already been incorporating the taste of hemp and cannabis in their brews. Coalition Brewing says on its website that cannabis and hops “share many characteristics, including flavors, aromas, and medicinal qualities.” Other breweries, like Humboldt Brewing Co. and O’Fallon Brewery, use hemp seeds to impart flavor.

“As a brewery, we are skilled in the art of making delicious beverages with delicate flavor profiles,” says Jim Furman, owner of Black Hammer Brewing in San Francisco. “Expanding or transitioning into making THC beverages isn’t a big leap.”

Earlier this year, Black Hammer was ordered to stop the production of its own CBD beer because it did not seek approval from TTB for its new formula. “The reason that the TTB won’t approve CBD as a brewing ingredient at this time is because it is still scheduled as an illegal substance, and until that changes we cannot expect to be permitted to brew beer with CBD,” wrote Furman in an email, though he hopes this will change. (A 2016 Drug Enforcement Administration rule labels CBD—along with other marijuana extracts—as a schedule 1 drug.)

Meanwhile, Coalition Brewing—maker of the Two Flowers IPA CBD beer—told The Ringer that it reformulated its product to fit the rule and continue selling. A Coalition spokesperson told Mother Jones in a Facebook message that the brewery “can’t go into too much detail about our proprietary processes that allow us to continue making these beers” but that the brewery continues to “work closely with its regulatory partners, including the TTB, to advance legislation in this area.”

In a recent newsletter, TTB stated that it “will not approve any formulas or labels for alcohol beverage products that contain a controlled substance under Federal law, including marijuana.” The TTB would not comment on specific products.