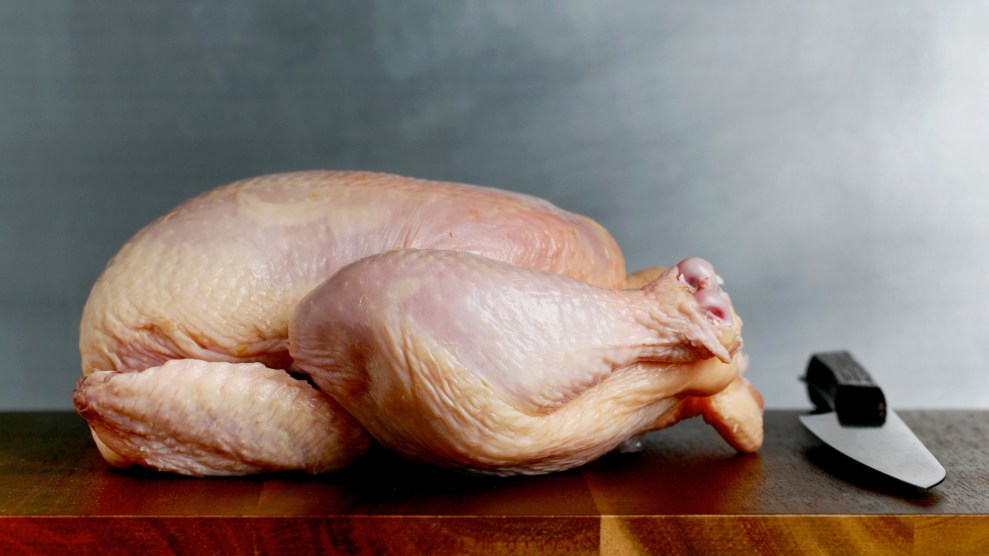 When you think about food poisoning, your mind probably turns to stomachaches and other digestive troubles. But there’s mounting evidence that bacterial pathogens, particularly some strains of E. coli commonly carried on poultry, can also cause a common ailment we don’t normally associate with dinner: urinary tract infections.

A new study, led by Professor Lance Price of the George Washington University Milken Institute School of Public Health, pinpoints a particular E. coli strain that’s adapted to thrive in chickens and also turns up in people with UTIs. For the study, the team took samples of chicken, turkey, and pork from Flagstaff, Arizona, supermarkets every two weeks for an entire year. Over the same time period, they analyzed urine and blood isolates taken from Flagstaff’s main hospital. They found E. coli on about 80 percent of the meat samples and in 72 percent of the urine and blood samples.

“The most important message from this paper is that it establishes the direction of transmission from poultry to people,” said lead scientist Lance Price.

Then the researchers analyzed the genomes of the E. coli cells to see if they could find genetic matches between the bacteria on the meat and in patients. The strains on pork were not related to ones found in people. But one particular strain turned up both ubiquitously on poultry and to a lesser extent in patients’ samples. That strain, called E. coli ST131-H22, is what the researchers call “avian associated”—that is, it has genes adapted to help it thrive in birds.

The strain caused just 0.5 percent of the UTIs identified in the study, Price told me. But “if you scale that to the national estimates, ST131-H22 could be causing 30,000 to 40,000 UTIs in the US each year,” he said. And, he added, “this is just one of many E. coli strains present in our food supply”—some of those other strains could be triggering UTIs, too.

Previous research on poultry and UTIs suggested but didn’t definitively establish an E. coli strain with a bird-specific genetic signature. “The most important message from this paper is that it establishes the direction of transmission from poultry to people, and it shows that poultry-adapted strains are capable of causing bladder and kidney infections in people,” Price said.

I asked Price how E. coli from supermarket chicken could cause urinary infections. He explained that, as with any other bacteria, E. coli ST131-H22 doesn’t survive proper cooking. But as I noted in a recent piece on salmonella, cross-contamination—say, failing to wash a knife or even your hands properly after contact with raw chicken, a common kitchen blunder—is a way for germs to move from your meat into your mouth. The ST131-H22 strain is harmless to the digestive tract, Price explained, so it doesn’t trigger what we normally think of as food poisoning.

But when it gets into the urinary tract—which for anatomical reasons happens much more frequently with women than with men—it can cause infections.

Meanwhile, UTIs are getting harder to treat as E. coli strains evolve to resist antibiotics. Price told me the poultry-adapted ST131-H22 strain identified in the study was more likely to be resistant to tetracycline—an antibiotic used in human medicine and some chicken production—than non-poultry-adapted strains. Luckily, that’s not a huge concern, he said, because tetracycline isn’t among the antibiotics commonly used to treat UTIs.

And the US poultry industry has begun to phase out routine use of antibiotics used in human medicine. Other regions still employ the same kind of antibiotic-intensive production that the US industry used to. “When my colleagues look at poultry E. coli in Southeast Asia, where they use all kind of antibiotics in livestock production, they see much scarier resistance profiles,” Price said.