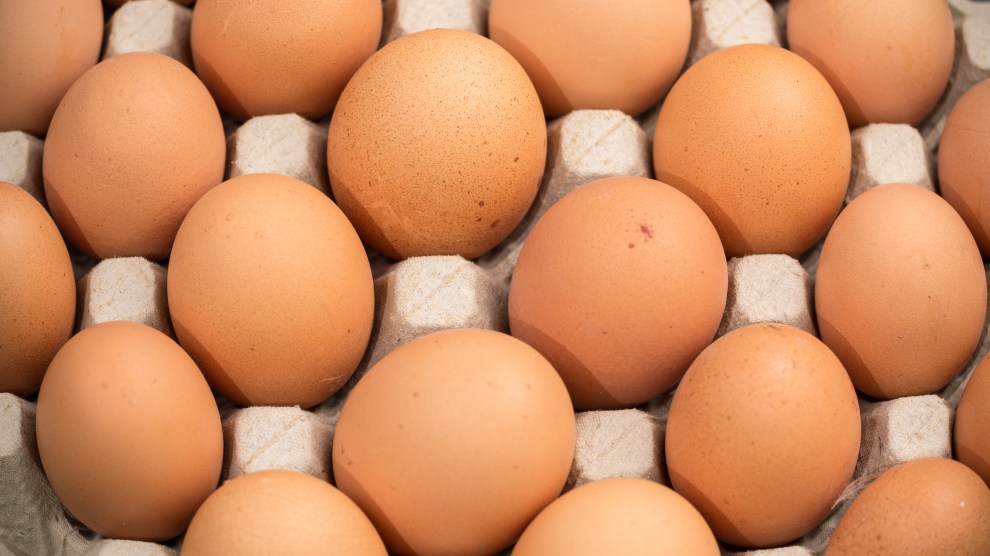 A decade ago, California’s farm animals were supposed to get more room to breathe. In 2008, California voters passed Proposition 2, a ballot measure intended to phase out what animal rights activists consider the worst types of farm animal confinement. The initiative mandated that veal calves, sows, and egg-laying hens be given space to spread their limbs, turn around, stand up, and sit down without touching the walls of their enclosure or another animal. It went into effect in 2015, giving producers seven years to adjust their operations.

The problem was, the law was vague about the minimum space requirements, and it lacked enforcement. Now, a new measure on this year’s state ballot, Proposition 12, would build on Prop 2 by being more specific about how much room to give the farm animals, among other things. But rather than embrace this update, some animal rights groups are urging voters to shut it down.

“California finds itself behind food companies and other states when it comes to farm animal treatment,” said the Humane Society’s Josh Balk.

There’s no doubt that Proposition 2 made waves across the country. After it passed, “every major food company had a policy that moved away from confinement systems in the supply chain—even McDonald’s, Walmart, and Safeway” said Josh Balk, the vice president of farm animal protection at the Humane Society of the United States, which is sponsoring Prop 12.

But now, after a number of other measures inspired by Prop 2 eased confinement conditions in other states, “California actually finds itself behind food companies and other states when it comes to farm animal treatment,” Balk told Mother Jones. (After Prop 2 passed, Massachusetts implemented its own ballot measure ensuring eggs sold in the state must come from hens given a minimum standard of 216 square inches of space by 2022. Thirteen states are currently suing the state of Massachusetts on the grounds that this law dictates how other states raise their animals.)

The vague language of California’s Proposition 2 prompted lawsuits from egg industry players seeking clarification on the minimum space requirements. Those lawsuits went nowhere, but Prop 2’s lack of specificity led the California Department of Food and Agriculture to set a rule that hens would have a minimum of 116 square inches of space. Some producers ended up adopting colony-cage systems, essentially putting their hens in larger cages, which animal rights activists opposed.

Prop 12 hopes to remedy that by detailing minimum space requirements for each type of animal. Hens would get a minimum of 144 square inches (1 square foot), the cage-free requirement recommended by the United Egg Producers. The proposition also specifies that the Department of Food and Agriculture and the California Department of Public Health would enforce these guidelines. Prop 2 made it illegal to sell pork raised from sows that were kept in gestation crates, stalls they’re sometimes confined to during pregnancy; Prop 12 would extend that rule and prevent out-of-state vendors from selling veal and pork bred from crated sows in California.

Prop 12’s supporters also include the American Society for the Prevention of Cruelty to Animals, United Farm Workers, Sierra Club, the Center for Food Safety, veterinary groups, and some local California animal rights groups. It would go into effect in 2020 for veal and pork and 2022 for egg-laying hens.

“I think it’s important to acknowledge, yes, this isn’t going to get rid of all the cruelty. But this is a real opportunity for California voters to make an impact for animals,” said Cheryl Leahy, the general counsel for Compassion Over Killing, another group that supports Proposition 12. A policy advocate at the Animal Welfare Institute agreed that the measure is a step in the right direction, especially on a state level.

The majority of groups opposing Proposition 12 are industry groups like the National Association of Egg Farmers (NAEF) and the National Pork Producers Council (NPPC) on the grounds that it removes consumer choice, allegedly violates interstate commerce laws, and increases costs. “Farmers must be allowed to use systems and production methods that work best for their operations and their animals—and that meet the demands of all consumers—and the lawmakers, regulators, or citizens in one state shouldn’t be able to dictate to farmers in the other 49 how to raise and care for their animals or how to run their operations,” a spokesperson from NPPC told Mother Jones.

NAEF is specifically worried about costs for farmers, who have already updated their facilities to comply with Prop 2, and consumers who may pay more for the eggs. But they also worry that cage-free hens would suffer higher mortality rates from “the pecking order”—when certain chickens try to establish dominance. A large number of hens together in one space, in a cage or outside of it, can harm the lowest in the pecking order and make it harder for those chickens to fend off disease.

A few Proposition 12’s opponents, albeit for vastly different reasons, are animal rights groups. The Humane Farming Association, a nonprofit organization focused on farm animals’ rights, claims that Proposition 12 is misleading. “The original promise was that [hens] would be out of cages by 2015,” said Bradley Miller, the National Director of HFA, pointing to the colony cage system that popped up in lieu of cage-free eggs. He argues that the new measure’s deadline for cage-free eggs “says that they can remain in cages for additional years.”

Cage-free does not guarantee time outdoors for egg-laying hens, just no cages.

Miller also says that Proposition 2 had no effect on veal calves or hogs*, because, as a 2009 California Department of Food and Agriculture report found, California’s veal industry is “virtually nonexistent” and sow gestation crates “are not known to be used in California.” Though Proposition 12 is intended to ban the sale of cruelly confined animals in California, the Intercept reported that calves—in California and other states—can still be kept in harsh confinement if they are sold as beef instead of veal, which would enable farmers to skirt around the law.

People for the Ethical Treatment of Animals (PETA) also opposes Prop 12, writing in a blog post on its website that the standards would not be enough to ensure humane conditions. “Beware!” the organization stated, the proposition would “allow farms to keep egg-laying hens in cages until 2022, at which time factory farms would still be able to confine uncaged hens to massive, crowded sheds with only 1 square foot of space per bird.” They’re not too far off about the sheds: Cage-free does not guarantee time outdoors for egg-laying hens, just no cages.

The Humane Society’s Balk argues that Prop 12 is better than nothing. “It is currently legal to sell eggs from caged chickens in the state of California, so this is going to phase it out,” he said. “If passing it is not good enough for some and they would prefer a status quo where animals are still caged, I’d say that just does not reflect mainstream everyday California voters.”

*Clarification: This sentence has been revised to better reflect Miller’s stance.