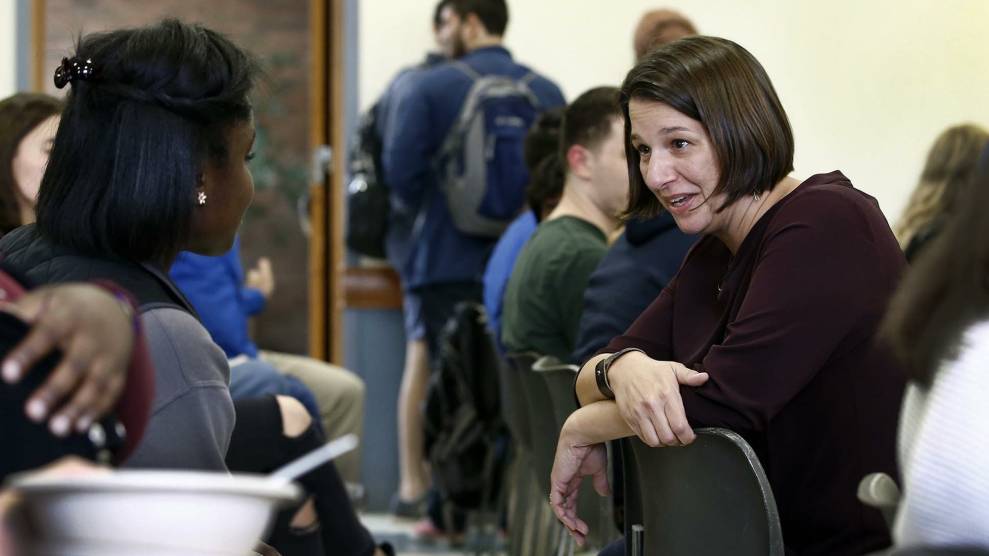 King, seen here with students at Franklin & Marshall College, still has an uphill fight to unseat Smucker in this deeply conservative district.Chris Knight/FERN

In Lancaster County, Pennsylvania, a major dairy-producing community, a tight congressional race is stirring up a debate among farmers about whether their Republican representatives are looking out for small-scale agriculture.

The number of dairy farms nationwide has shrunk 30 percent in the last 10 years, to just over 40,000. A 120-cow dairy could lose $24,000 this year to low milk prices alone. “Dairy farmers are really struggling,” says Bob Kauffman, a retired Lancaster dairy farmer. “Trump says farmers are going to sacrifice now to get money later, but a lot of them can’t take another year.” Low commodity prices and President Donald Trump’s trade war have slashed farm incomes; for many struggling farms, these latest hits have pushed them to the brink of shutting down.

Kauffman has voted Republican his whole life, but now, at 76, he is supporting a Democrat in the upcoming congressional election, a first-time candidate named Jess King.

King is trying to unseat incumbent Lloyd Smucker, a conservative wrapping up his first term in Congress. King, whose family goes back 12 generations in Lancaster, trailed Smucker by single digits in early October, in a district that went for Donald Trump by more than 20 points. She’s been endorsed by Bernie Sanders, Emily’s List, and even Ben Cohen and Jerry Greenfield, the co-founders of Ben & Jerry’s.

King is one of dozens of Democratic challengers across the country who hope to break the GOP stranglehold on local and federal offices. “We have a responsibility to our country, to humanity, to our values, to run in a place like this and give people an option they’ve never had before,” she said at a campaign event in October.

Her campaign is built on a small army of volunteers who knock on doors, make calls, and engage with voters in person—an old-school effort in an age of PACs and polls. King’s supporters all say the same thing about the candidate: She listens to what people say they need, and builds those needs into her policy priorities. That level of attention is particularly meaningful to local farmers, who feel forgotten by federal policy and neglected by local officials. King is proud that her average campaign donation is $35, and claims that her campaign has mobilized more people than any other Democratic campaign in the district’s history.

The result is something of a local phenomenon. Diane House, a retired teacher who has lived in Lancaster for 30 years and is involved in the local Democratic party, says that there is more excitement for King than for any Democrat who’s ever run for Congress in the area. “She’s there for all of us,” House says. “It’s a kind of Jess movement.”

But the odds of her winning are still long. While Lancaster City, a town of some 60,000, is reliably Democratic, the surrounding rural areas are not. If King is to win, it will require a critical mass of farmers to break with tradition and embrace her upstart candidacy—a shift that, for many, would be tantamount to assuming a new identity.

Lancaster County sits between Philadelphia and Harrisburg, the state capital. More than 80 percent of the county’s 538,000 residents are white (though nearly two-thirds of Lancaster City is non-white, and some 30 percent of the population is of Puerto Rican descent). The county has a long history of refugee resettlement, having taken in more refugees than 20 U.S. states, including hundreds displaced by Hurricane Maria.

Along Lancaster’s country roads, cows nibble on pasture, grain fields wave in the breeze, and silos dot the horizon. The horse and buggy is also a common site on those roads, as Lancaster has the largest Amish population in the country. The average farm there clocks in at just 78 acres, dramatically smaller than the national average of over 440 acres. There are about 1,800 dairies, which account for nearly a third of all the farms in the county, and those dairies produce about $425 million worth of milk each year.

But beneath the bucolic image, the farm economy is teetering. With its high concentration of dairies, the county is particularly sensitive to today’s persistently low milk prices. Lancaster has preserved more of its dairies than some other Pennsylvania counties, but it still has fewer than it did a decade ago. And some of those that remain are in a precarious state. Earlier this year, milk processor Dean Foods dropped several Lancaster farmers from their contracts, leaving them without a buyer. Other area farmers are involved in ongoing litigation against the country’s largest dairy cooperative, Dairy Farmers of America, alleging that the company is abusing its market power in the region.

“I love blowing up paradigms as a progressive Mennonite running for Congress.”

All that economic strain has led some farmers to reconsider their vote as the midterms approach. “Farmers are feeling disillusioned with politicians,” says Mike Eby, a local dairy farmer and board chair of the National Dairy Producers Organization. He says they’ve “woken up to the reality” that major agriculture lobbies, and the Republican officials they fund, aren’t always working purely in the interest of the farmer.

“There’s been a lot of propaganda out there for many years” from Republicans who say they represent farmers, he says. “What they actually represent is Big Ag.” The current trend of low prices has driven him and other farmers to “start asking the real questions” — including why Republicans aren’t challenging corporate control in dairy processing, or why they haven’t backed immigration policies that secure labor for the region’s farmers.

Those questions provide an opening for Jess King, whose candidacy is anything but conventional for Lancaster County. “I love blowing up paradigms as a progressive Mennonite running for Congress,” she said at the October event. A longtime advocate for small-business owners, King often says that both parties have sold out to corporate interests and that she aims to give voice to “average working folks.”

Her agricultural platform calls for stronger antitrust enforcement in the heavily consolidated dairy sector, streamlining agricultural regulations, and providing incentives for conservation efforts like cover cropping and farmland preservation. King says farmers have told her that their top issues are access to healthcare and retaining immigrant workers. Her platform supports a pathway to citizenship for immigrants and Medicare for all.

Those issues don’t come up much in incumbent Lloyd Smucker’s platform, whose policy priorities map onto the national GOP strategy. A former construction company executive, Smucker spent seven years in the Pennsylvania Senate before being elected to Congress in 2016. He is supported by the National Rifle Association, touts an “unwavering pro-life stance,” and supports tougher immigration policy. FiveThirtyEight reports that Smucker has voted with President Trump over 95 percent of the time.

“He’s a personable guy and he connects with a lot of the voters,” says Dale Hamby, a Lancaster farmer and a candidate for state representative, of Smucker. But “he doesn’t have a lot of original thoughts” about policy. “He just seems to be a rubber stamp of wherever the wind is going.”

“We need somebody to stand up for the small farms. Jess is willing to go listen to farmers and hear the problem.”

Smucker’s agricultural platform leans on policies—such as repealing the Environmental Protection Agency’s updated scope of the Clean Water Act and providing incentives for landowners to protect endangered species rather than relying on federal regulations—that can seem out of step with the problems consuming farmers in his district. His platform doesn’t mention either the dairy-price crisis or the broader problem of low commodity prices. None of the 14 bills he has introduced since taking office are related to agricultural production.

“We need somebody to stand up for the small farms,” says Bob Kauffman, the retired farmer. “Jess is willing to go listen to farmers and hear the problem. And our congressman now has been absent.”

Smucker has held no public town halls since being elected. Constituents have noticed, with one group launching a “Where is Lloyd?” website. (Smucker’s congressional website has a page titled “Here’s Lloyd!” that details his recent meetings with constituents.)

Given all this, things could seem bleak for Smucker. At a recent debate between the two candidates, the crowd overwhelming favored King, and attendees even laughed at Smucker’s responses a few times. But the district remains majority Republican, with just 32 percent of voters registered Democrat. “Some of them are starting to see, let me vote for the person, not the party,” Dale Hamby says of local Republicans. But “that’s a slow process.”

Yet Hamby’s impressed with the degree to which King has “gotten people excited.” During the presidential election, the lawns in his neighborhood were lined with Trump signs; now, he says, most of the signs are for King.

In many ways, Lancaster has become a model for the Trump-era effort to build coalitions that span divides between rural and urban, Republican and Democrat. Lancaster Stands Up, a civic group that emerged after Trump’s election, led by a young, multiracial group of organizers, has rallied thousands of residents around a progressive message for the county and the country. The King campaign has built on that momentum.

It’s a story that has played out in traditional Republican districts around the country—but not so much in farm country. Farmers are often assumed to be an unwavering Republican voting bloc. But in Lancaster, the farmers can be seen through a different profile: a group of independent small business owners facing a dire economic moment and wondering whether it’s time for a change.

Mike Eby, a lifelong Republican, fits that mold. He insists he hasn’t made up his mind about the November election, but says, “I would be more inclined to vote Democrat now than ever before in my life.”