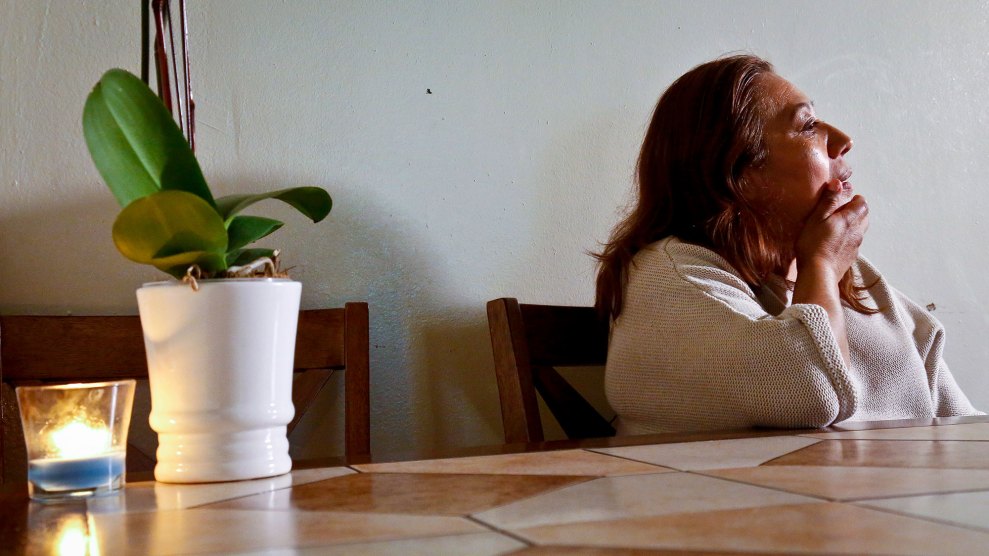 Rosa, an undocumented immigrant who wants her last name withheld, used to get about $190 per month from SNAP, but stopped taking benefits for fear of deportation. Pictured on May 17, 2017.Bebeto Matthews/AP

In the late 1990s, pediatricians in Boston and several other major US cities began comparing notes about a disturbing trend in their low-income patients: More of them were struggling to gain weight—a condition known as “failure to thrive”—and lagging on important developmental milestones. The pattern came on the heels of a major policy change. In 1996, the Clinton administration overhauled the welfare system, and many families found themselves cut off from benefits like food stamps they had once turned to in times of need. The doctors decided to start tracking public policy changes’ impacts on the health of low-income children and their families. Their study, called Children’s HealthWatch, continues today.

Earlier this week, its researchers presented findings that portend another round of deteriorating public health due to the government’s actions: Immigrant families are dropping out of the food stamps program, now called the Supplemental Nutrition Assistance Program (SNAP), likely because they are afraid using public benefits could lead to problems with their legal status. Less access to healthy, affordable food is associated with a higher risk of poor health outcomes like nutrient deficiency and poor cognitive development for kids, as well as more hospitalizations.

Listen to Children’s HealthWatch lead researcher Allison Bovell-Ammon discuss the study on Bite, starting at 16:00 of the episode below:

A quarter of children in the United States have at least one immigrant parent. Immigrant families, especially those with mothers who have been in the country for fewer than five years, struggle disproportionately with food insecurity, or a lack of access to enough nutritious food: Nearly 25 percent of US-born kids of new immigrant mothers are food insecure, compared to around 10 percent of those whose moms are American citizens.

Food insecurity among immigrant families has been on the rise since the Great Recession, and an increasing number of these families have turned to federal assistance when their larders are bare: The Children’s HealthWatch study, which surveyed more than 35,000 mothers of young kids, showed a clear increase in the use of SNAP by immigrant mothers of US-born children between 2007 and 2017. Forty-three percent of new immigrant mothers surveyed used the program by 2017.

But then, during the first half of this year, participation rates dropped to 34.8 percent, nearly a ten percent decline after a decade of steady increase. During that same period, child food insecurity rates, the most severe form of food insecurity, rose. Lead researcher Allison Bovell-Ammon called this paradoxical pattern—a greater need for food for kids but fewer parents choosing to access public nutrition programs to get it—”particularly concerning.”

She thinks it’s evidence that immigrants are avoiding using public programs like SNAP out of fear—even if their kids or family members or they themselves are eligible for the program. “They don’t want to show up in a government office, especially in light of the rhetoric that’s been happening on the national stage around the treatment of immigrants in our country,” Bovell-Ammon says.

This “chilling effect,” as it’s often referred to, extends far beyond SNAP. Ever since President Donald Trump took office, bringing with him a hard line nationalist stance and inflammatory rhetoric, reporters, immigration attorneys, and advocates have noted an uptick in immigrant families foregoing public services like Medicaid, school lunch programs, and WIC, a federal food assistance program for pregnant moms and children. Politico reported in September that agencies in at least 18 states said they’ve seen drops of up to 20 percent in enrollment. “We’ve been receiving consistent reports from providers throughout the country that they are seeing disenrollment from programs by immigrants who specifically cite fear of deportation as the reason,” says Jackie Vimo, economic policy justice analyst at the National Immigration Law Center.

Vimo met a woman who gave up on receiving cancer treatments paid for by Medicaid because she was “terrified of losing her ability to have her husband with her” because he is not a citizen. One elderly American citizen in the Bay Area canceled his family’s food assistance benefits out of fear for his wife’s status—even though she is a legal permanent resident, says Stephen Knight, director of policy and partnerships at Northern California’s Alameda County Community Food Bank. Knight said a young woman called the organization’s food help line and requested to have her mother’s name removed from the database: “She was concerned that her mother, a green-card holder, could be deported for picking up free food.”

“She was concerned that her mother, a green-card holder, could be deported for picking up free food.”

Public health advocates worry that panic about the Trump Administration’s recent proposed changes to the Public Charge rule—which is used to determine an immigrant’s eligibility for a green card—is exacerbating the situation. The new rule would broaden the factors assessed when the government determines whether an immigrant applying for a green card is likely to become a “public charge,” or dependent on government assistance. If the rule is enacted, the government would consider an applicant’s past receipt of SNAP, Medicaid, section 8 housing, and many other public benefits as “a heavily weighed negative factor.” (It would also consider a family’s earnings: Making below 125 percent of the federal poverty guidelines, roughly $26,000 a year in household income, could hurt someone’s chances of earning a green card, effectively “shifting us to a system where the American Dream goes to the highest bidder,” Vimo says.)

Vimo points out that even the Department of Homeland Security acknowledges the potential negative consequences. The proposal warns that disenrollment or foregoing of enrollment in public benefits by immigrants eligible for them could lead to “worse health outcomes,” “increased use of emergency rooms,” “increased prevalence of communicable diseases,” and “increased rates of poverty,” among other drawbacks. A 60-day public comment period for the rule concludes on December 10; so far, people have submitted more than 58,000 comments.

Knight says the drafted rule has sent a “thunder-clap” of fear through his community. “This kind of proposal is going to worsen public health and hunger by driving people off public healthcare and food assistance,” Knight says. “It’s going to impact us all.”