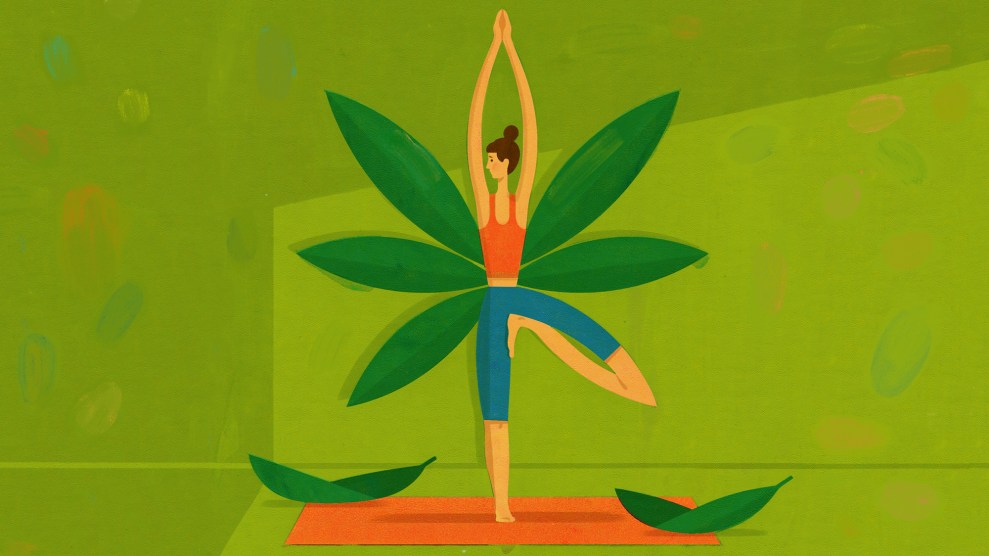 The wellness world has long been inundated with health trends—“raw” water, probiotics, juicing, you name it—but cannabidiol, or CBD, a marijuana-derived chemical, has taken things to new heights. Retailers market it as a “miracle molecule,” claiming it can treat ailments including nausea, anxiety, cancer, arthritis, and even Alzheimer’s disease. It’s commonly sold as an oil or added to products like candies, teas, and lotions you can find in health food stores, in pet depots, or even on Amazon.

Experts estimate the CBD market is worth hundreds of millions of dollars, and it’s projected to surpass $1 billion by 2020. But what do science and the law really say about this new “miracle molecule”? We’ve fact-checked some common claims so you don’t have to.

It’s totally legal. False. CBD is illegal under the federal 1970 Controlled Substances Act. As a Schedule I drug, it’s in the same category as heroin, LSD, and ecstasy—even when it’s derived from hemp, a variety of cannabis that, unlike marijuana, contains only trace amounts of THC, the compound that gets you high.

It’s hard for scientists to actually prove CBD is an anti-anxiety wonder drug, despite its reputation.

Things become murky at the state level. Although several states have already legalized both marijuana and hemp, users technically can be prosecuted under federal law. (Republican Sen. Mitch McConnell is pushing for legislation that would federally legalize hemp, which is a big crop in his home state, Kentucky.) Still, experts say getting arrested for using CBD is unlikely: As Shanna Babalonis, an assistant professor of behavioral science at the University of Kentucky College of Medicine who helped write a 2018 World Health Organization report about CBD, pointed out, “It’s being sold online with no consequence.”

It can treat a laundry list of physical and psychological ailments. Maybe. Plenty of animal studies suggest CBD can help alleviate anxiety and encourage relaxation, but so far there’s limited evidence showing it has that effect—or any other, for that matter—in humans. To date, the only CBD medication approved by the Food and Drug Administration for medical use is a drug called Epidiolex, which was developed by a British company to treat two rare forms of epilepsy.

Other drugs may be on the way. A medication called Arvisol, developed by a company in the Netherlands, is intended to treat neurological and psychiatric disorders, including schizophrenia, and is under­going early clinical trials. In the United States, Zynerba Pharmaceuticals is developing a CBD gel to treat symptoms of a gen­etic condition called fragile X syndrome, which can include anxiety, mood swings, and cognitive impairment. And limited evidence indicates CBD may help with opioid, cocaine, and tobacco addiction, according to the WHO report, though “considerably more research is required.”

“I’m excited about it, but I caution people to not jump 20 steps ahead of the science.”

Don’t hold your breath on that. Scientists need approval from the FDA and the Drug Enforcement Administration to study any Schedule I drug, and as a 2017 report from the National Academies of Sciences put it, this barrier has “discouraged a number of cannabis researchers from applying for grant funding or pursuing additional research efforts.” What’s more, the federal government typically only fast-tracks trials for Schedule 1 substances that treat grave illnesses—so it’s hard for scientists to actually prove CBD is an anti-anxiety wonder drug, despite its reputation. All the red tape has prompted some companies to move their research operations to Israel, where regulations around marijuana are more relaxed.

There is “great potential” for CBD, says Margaret Haney, director of the Marijuana Research Laboratory at the Columbia University Irving Medical Center. Still, Haney, who is currently testing CBD’s ability to treat nerve damage pain, warns that people may be too eager to tout the drug. “I’m excited about it, but I caution people to not jump 20 steps ahead of the science.”

It won’t get you high. True. While both CBD and its sister cannabinoid THC have the same chemical formula—21 carbon molecules, 30 hydrogen molecules, and two oxygen molecules—their structures differ significantly. So, while THC can bond with receptors in the brain, causing the high associated with marijuana, CBD cannot. International clinical studies show that even high doses of oral CBD do not cause “THC-like effects” such as impairment, increased heart rate, or dry mouth, according to the WHO report.

It’s available for cheap on the internet. True, but be very careful—while most states that permit CBD sales require products sold in brick-and-mortar stores to undergo testing, the online CBD market is almost entirely unregulated. In 2017, the FDA tested dozens of products from four major online CBD retailers based in Florida, Colorado, and California. Many products did not contain the levels of CBD that retailers advertised, and some made unfounded claims like, “CBD makes cancer cells commit ‘suicide’ without killing other cells.” The FDA sent warning letters to all four companies requiring them to correct the information. These “deceptive marketing” techniques may even prevent some patients from getting the medical care they need, the agency wrote.

Haney and her colleagues agree CBD shows promise—and more research and regulation will help weed out bogus products. In the meantime, it’s still best to proceed with caution: What you purchase online might not even contain CBD. “There’s no regulation, so buyer beware,” says Haney. “You don’t know what you’re really getting.”