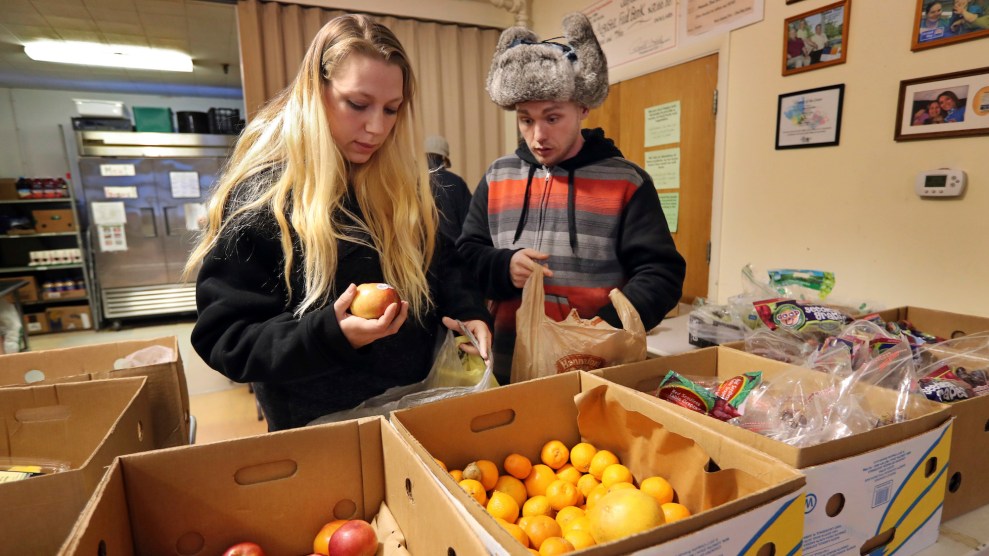 Update (12/20/2018): Early Thursday morning, the Department of Agriculture released its much-anticipated proposed rule to tighten access to the Supplemental Nutrition Assistance Program. Under current policy, states can gain waivers to SNAP work requirements for able-bodied adults if the unemployment rate there is at least 10 percent or exceeds the national unemployment rate by 20 percent. Under the new rule, that second stipulation would only hold if the jobless rate is above 7 percent there. The administration expects this and other tweaks to cut SNAP funding by about $1.6 billion annually, or about 2.5 percent. Sarah Reinhardt, food systems and health analyst at the Union of Concerned Scientists, called the proposal a “temper tantrum—the Trump administration is lashing out because they couldn’t get what they wanted legislatively in the farm bill” and a “consolation prize for House Republicans who couldn’t force their bad ideas into the farm bill process.” Meanwhile, President Donald Trump is scheduled to sign the farm bill Thursday afternoon.

The farm bill—a piece of mega-legislation that shapes US agriculture and hunger policy every five years—finally sits on President Donald Trump’s desk after recently passing through the lame-duck Congress. It’s missing something the president and Republicans in the US House really, really wanted: ramped-up work requirements for recipients of the Supplemental Nutrition Assistance Program (formerly known as food stamps), the biggest US food aid program.

Trump has repeatedly taken to Twitter in praise of work requirements:

When the House and Senate meet on the very important Farm Bill – we love our farmers – hopefully they will be able to leave the WORK REQUIREMENTS FOR FOOD STAMPS PROVISION that the House approved. Senate should go to 51 votes!

The measure that Trump and his allies pined for would have eliminated food aid for at least 1.2 million people—with about a third of the affected households containing senior citizens, nearly a quarter with children, and 11 percent with a disabled person, according to nonpartisan think tank Mathematica. As Tracie McMillan reports in her recent Mother Jones piece, the failed SNAP tweak is part of the Trump administration’s push to “introduce work requirements for every public program aiding the poor in the United States”—which, as McMillan demonstrates, makes life harder on low-income citizens without increasing employment opportunities or reducing poverty.

In June, urged on by lame-duck Speaker Paul Ryan and ultra-conservative Freedom Caucus members, the House narrowly passed a farm bill version that included new work requirements. But the Senate refused to go along, leading to a stalemate. After losing control of the House in the midterm elections, Republicans faced the choice of caving on work requirements or punting the farm bill to the Democratic-led House in 2019. They caved.

Trump plans to toss a bone to House conservatives who pushed hard for the measure but were unable to deliver on their SNAP agenda, Politico reported Monday.

Under current SNAP rules, non-disabled adults between the ages of 18 and 49 who don’t have dependents can only receive food aid for three months over a three-year period unless they work or are enrolled in job training for at least 80 hours per month. But it allows states to waive the requirements in areas where the unemployment rate stands above 10 percent or exceeds the national unemployment rate by 20 percent, according to the Office of Management and Budget. As of October 1, the Department of Agriculture had granted full waivers to four states—Alaska, Louisiana, Nevada, and New Mexico—as well as to economically stressed regions of 29 others.

The USDA, which administers SNAP, has been formulating a rule change that could make it harder for states to grant such waivers. According to Politico, the “scuttlebutt in Washington” is that Trump’s imminent signing of the final farm bill “is likely to coincide” with the USDA’s public release of the proposal.

Currently, it’s impossible to tell exactly what the administration has in mind. In the USDA’s submission to the OMB, the proposal is discussed in vague terms, noting only that it will “propose modifications” to the waiver program. Two weeks ago, USDA chief Sonny Perdue said in a speech before the Illinois Farm Bureau that the rule would be about “tightening up those waivers,” according to an account in trade journal Agri-Pulse. Perdue also declared himself “sad” about the farm bill’s lack of harsher work requirements and presented the proposed rule as a way to “please those conservatives” who share his displeasure. He added that the move “will encourage more work.”

There’s little evidence that work requirements on anti-poverty programs encourage more work. As the Center on Budget and Policy Priorities notes, the large majority of SNAP recipients who aren’t working “are caring for someone else, suffering from a disability or chronic health condition that limits their ability to work, or going to school.” Work requirements merely “leave many people who face substantial barriers to work with neither earnings nor food assistance.”

In an emailed statement, a spokeswoman from the Union of Concerned Scientists noted that the rule could do anything from imposing a “higher threshold of unemployment rates and/or labor surpluses” to qualify for waivers, to eliminating waivers altogether. Such a move would fit the “larger pattern of the Trump White House ramming through their ideological objectives administratively when they can’t get them legislatively,” she wrote.

Once the administration proposes the rule, it will have to go through at least a 60-day comment period before being implemented.