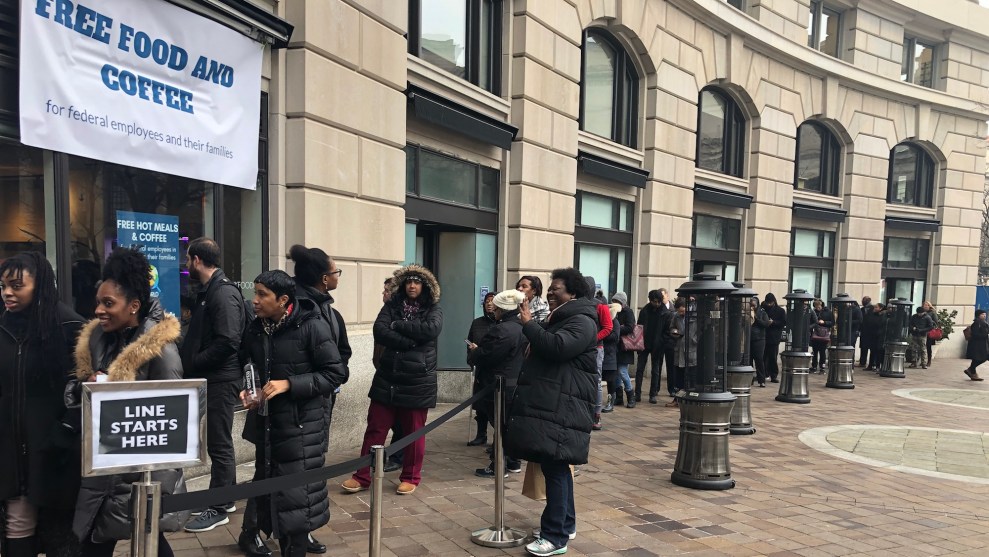 Within a week of opening, a relief kitchen on the corner of Pennsylvania Avenue in Washington, DC, just across from the J. Edgar Hoover Building, had served nearly 30,000 meals. The pop-up is the work of World Central Kitchen, the organization founded by DC-based chef José Andrés in 2010 to feed people impacted by the earthquake in Haiti. But the group wasn’t serving victims of a natural disaster this time. Instead, it was serving federal employees who have been left without pay during the country’s longest shutdown—including the FBI agents who work across the street.

“It’s a real testament to the severity of the crisis that our country’s in right now,” said Nathan Mook, the organization’s director. “People are really hurting and for the first time in their lives are having to stand in line to get a hot plate of food.”

You can hear a dispatch from the #ChefsforFeds kitchen on episode 75 of Bite, Mother Jones‘ food politics podcast. The story starts at 1:27 of the player below:

The #ChefsforFeds kitchen has seen roughly 5,000 people a day since it opened. The pop-up serves hot meals—to stay, but mostly to go—and coffee to any workers in need with a federal ID, between the hours of 11 a.m. and 6 p.m. Next door is a resource center that also provides groceries, diapers, and even pet food.

When I stopped by last Friday, chefs were serving up quinoa bowls, a pepper steak sandwich, and a vegetable minestrone soup. As Mook put it: “You know, this is not fancy food, it’s just good food.” Many people stopped by to pick up meals to bring home to their families, “so we want things that will be easy to take with them.”

The whole operation has been made possible by hundreds of volunteers who signed up to help, many of whom are furloughed workers themselves. One worker, Lindsey, who requested that Mother Jones not use her last name for this piece, found out about the kitchen through a friend.

“It’s just stressful—you can’t plan for the future, plan anything really, until the shutdown ends.”

“It’s definitely a little more challenging to go from two paychecks to one, so there’s just been a little bit of juggling and balance,” she told me. “I’m fortunate my partner is actually working, so we’re okay. But it’s just stressful—you can’t plan for the future, plan anything really, until the shutdown ends.”

In the meantime, she’s staying busy at the relief kitchen, unloading pallets of water, wiping off counters, and stocking canned goods.

“I think we’re really seeing a sense of community and camaraderie here,” Mook says. “People are sharing stories, laughing, tears are flowing. It’s pretty incredible to witness and we hope members of Congress will come down and really see what’s going on.”

On Tuesday, Rep. Don Beyer (D-Va.), who represents more than 80,000 federal employees, did stop by the kitchen.

“I’ve never seen anything like this,” Beyer said in a statement. “Having people who should be working in good jobs standing in a line in the freezing cold that wrapped around a building just to get hot meals is like something from the Great Depression, but the crisis inflicting this on them is entirely artificial. The government shutdown has people foregoing medical procedures and prescriptions; our region can’t take much more of this.”

But with the House now in recess, it looks like the shutdown will continue at least through the week. World Relief Kitchen has announced it will expand to other cities where workers are affected in addition to 14 other DC locations.