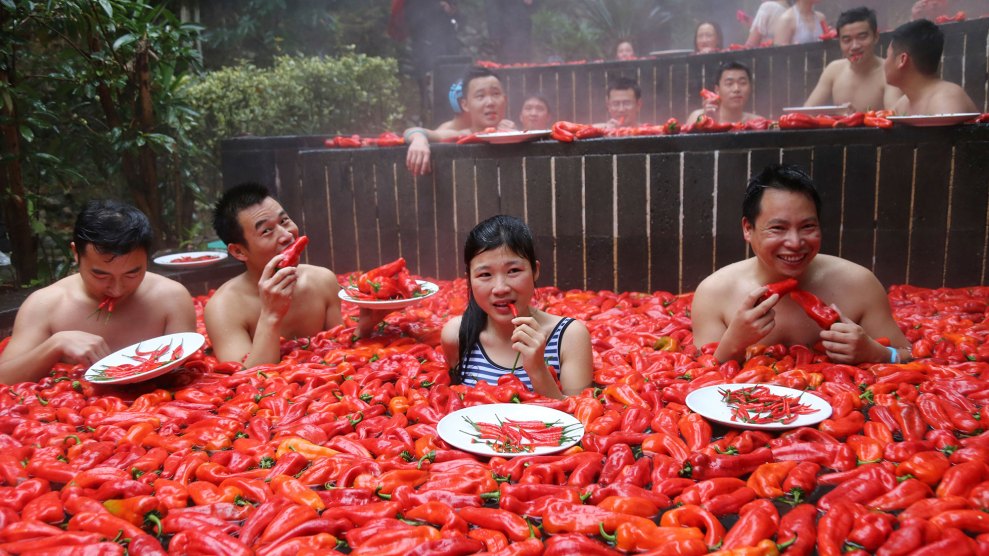 The tongue-searing, eye-watering heat caused by eating chili peppers comes from a substance called capsaicin. Stuart Walton became very familiar with the stuff while researching his book The Devil’s Dinner: A Gastronomic and Cultural History of Chili Peppers. Pepper breeders are always working on new versions of chilies in an attempt to create the spiciest fruit in the world, and Walton felt he had to keep up by sampling them. Each new variety “was a further assault on the senses,” he says. “If I eat something that’s very hot, then I start hiccuping, my digestive system gets subverted. And very, very occasionally, it can make me feel quite nauseous.”

But even though hot chilies trigger temporary discomfort, Walton’s loyalty to the fruit has only intensified. He joined us on Bite to talk about some of the benefits of capsaicin and eating spicy cuisine.

People have long wondered why this one plant developed such picante power. As one theory goes, chili peppers—which are native to the Americas—evolved to contain capsaicin to ward off hungry mammals, which had teeth that would grind up their seeds. Birds, on the other hand, are immune to the spicy substance, and leave the seeds intact and help disperse them.

But another evolutionary theory argues that neither birds nor rodents are responsible for chilies’ spice: Instead, it may have been insects. Bugs like cicadas and aphids are sensitive to capsaicin the same way we are. In humid, tropical climates, these insects feed on wild chilies. When they puncture the fruit, they introduce moisture and the risk of fungal rot. While doing research in Bolivia in 2001, biologist Joshua Tewksbury found a correlation between a high incidence of puncture marks on chilies with lower levels of capsaicin. He also observed that there are more naturally occurring hot chilies in tropical climates. So maybe the fruit evolved to be spicy to ward away the insects, and in turn, the fungus.

This theory may also help explain why humans started eating such a potent food in the first place. Here’s Walton:

What attracted early Americans to the spicier plants was their observation that the hotter varieties contained less or no fungus. In other words, they came with their very own built-in food preserver. Long before temperature-controlled food preservation was possible, the spicy chili’s antimicrobial properties helped to preserve not just the pepper itself, but any food mixed with it.

To this day, eating chili peppers does more than just scorch our mouths. When capsaicin “fools the brain into thinking that the soft tissue is being burned, it activates the pain receptors,” explains Walton. That in turn triggers your body to release endorphins, the body’s natural pain-killing compounds, which can help boost your sense of well-being. The substance has also been studied for its potential to make people feel full faster, and some researchers think it holds promise in the fight against obesity. One major survey of nearly half a million people in China between 2004 and 2008 showed that eating spicy food every day was associated with a lower risk of death. Of course, many of the health claims about chilies, as with any food, are speculative and have to be taken “with a pinch of salt,” Walton notes.

Capsaicin’s many uses—from seasoning to health agent to pepper spray—prompted researchers from Ireland and Brazil to wonder if they could create a more reliable supply of the substance. (The spice levels in even the same species of peppers vary dramatically, and the fruit can be hard to grow.) They published a paper on January 7 in the journal Trends in Plant Sciences proposing to use CRISPR gene-editing technology to create “hot tomatoes” full of capsaicin. If the fruit ever ends up on supermarket shelves, Walton suspects it will have the same flavor effect in dishes like salsa or pasta arrabbiata as the combination of tomatoes and chili peppers do now: “There’s no reason why they shouldn’t be in the same product.”

In The Devil’s Dinner, Walton explores the captivating history of how chilies spread around the world (mostly via Portuguese sailors), and dives into the growing cult of spice in the United States, where chili-eating competitors (mostly men) go to greater and greater extremes to prove their devotion.

Walton says he’s “too much of a wimp” to engage in such competitions. But he sees plenty of benefit in training his tongue to enjoy regular doses of spicy cuisine. In Bhutan, he points out, kids as young as four are introduced to hot chilies, when their palates are still very sensitive, and it becomes part of their taste education. “I think we can all gradually educate ourselves into persuading our palates to accept that amount of fieriness until it becomes an enjoyable aspect of food,” Walton says.