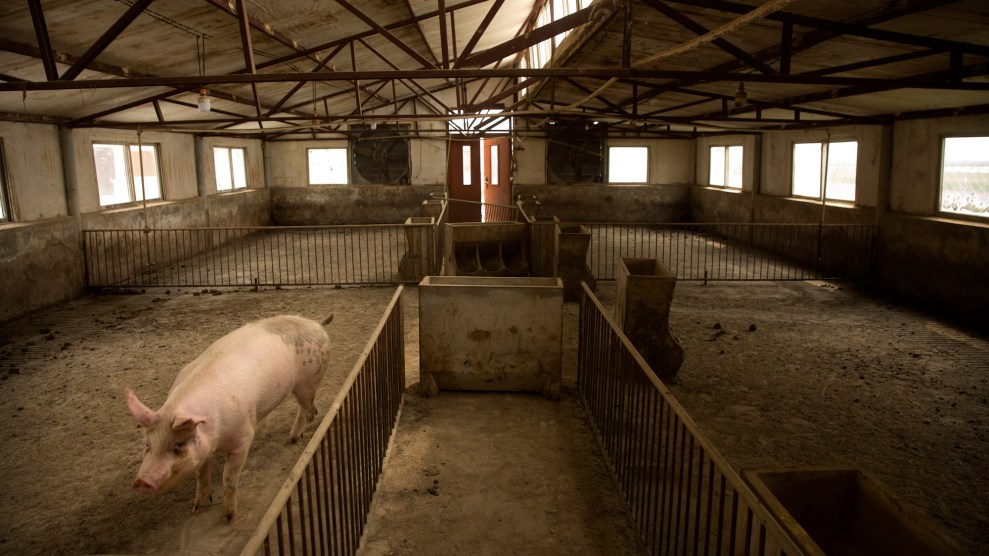 A nearly-empty barn at a pig farm in Jiangjiaqiao village in northern China's Hebei province, where swine fever is taking its toll.Mark Schiefelbein/AP Photo

African swine fever has already wiped out at least 20 percent of the nation’s hog herd this year, according to the Dutch agricultural lender Rabobank. That amounts to about 90 million pigs—more than the entire US hog population, the globe’s second-largest behind China. That’s bad news for American farmers, because China imports large quantities of our soybeans. China houses nearly 60 percent of the entire globe’s pig herd—and fattening nearly half a billion pigs for slaughter every year requires it to import two-thirds of all globally traded soybeans.

African swine fever has already wiped out at least 20 percent of the nation’s hog herd this year.

The problem will likely linger. “We hold the view that it will take over five years for China’s pork production to recover fully from ASF,” Rabobank notes. That’s because there’s no cure or vaccine for it—the only way to stop ASF is to kill all exposed pigs and impose draconian sanitation measures. The virus moves easily among pigs, and can travel great distances in contaminated feed and equipment, workers’ clothing and shoes, feral swine, and ticks. It has already spread to Mongolia, Cambodia, North Korea, South Korea, and Vietnam; and west to parts of Europe.

The United States has so far managed to avoid this plague, but the United States Department of Agriculture is on high alert. In recent months, it has rolled out a surveillance system and is “actively preparing to respond if ASF were ever detected in the US,” the agency reported in May. In April, a US pork trade group canceled its annual World Pork Expo in Des Moines, Iowa, citing an “abundance of caution” and fear that attendees from “ASF-positive regions” might carry the disease to the United States.

But China’s struggle with the infection is already roiling the US farm belt. Fewer pigs to fatten in China translates to less need for feed. The US agricultural lender CoBank estimates that the swine-fever crisis means China will import about 15 percent less soybeans over the next year than it would have with the swine fever crisis. Soybean demand would be lower still, if Chinese authorities weren’t responding to the pig shortage by ramping up production of other soy-eating meat sources, mainly chicken, CoBank notes.

ASF represents yet another setback for US soybean farmers, but it’s a potential boon to the our meat industry. China will have to import more meat, including chicken, to make up for the domestic pork shortfall.

US-based meat giant Tyson Foods—a massive producer of pork, chicken, and beef—is licking its chops: China’s ASF woes offers “significant upside to our pork business, while also lifting the chicken and beef businesses as substitutes,” CEO Noel White wrote in a May 2019 note. The industry is already cashing in. Even though China maintains a 62 percent tariff on US pork as part the trade war, it bought 143 thousand metric tons of it in the first three months of 2019—almost five times as much as it imported in the entire year of 2018. The stock prices of Tyson and chicken giants Pilgrim’s Pride and Sanderson Farms have all surged upwards of 40 percent in 2019, driven in part by speculation that US meat producers will benefit from the spread of ASF.

If the US meat industry does get a major export boost from ASF in Asia and Europe, that will ultimately be good news for the Midwest’s farmers, who will be well-positioned to supply the feed. But the impact on soybean and corn prices will likely be muted, CoBank says. The ASF crisis appears to be accelerating a trend among Chinese consumers to eat less pork and more chicken—and chicken is more feed-efficient, meaning it requires less soybeans and corn per pound than pork.

Of course, if ASF does manage to jump the ocean and take root on US hog farms, corn and soybean prices would tumble anew. So in addition to the climate chaos that’s soaking their fields at planting time and the political chaos that’s pinching their foreign markets, the Midwest’s farmers are feeling the squeeze from a virulent animal disease spreading on the other side of the world.