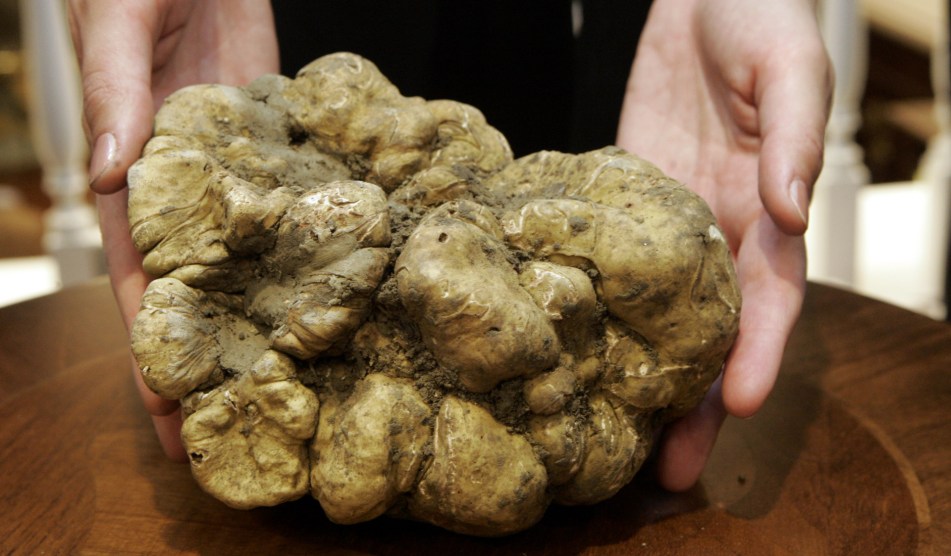 Why does it cost so much to have a chef shave the bulbous fungus we call a truffle over some pasta?

Most truffle species, unlike their mushroom brethren, develop underground, giving them protection and time to produce “small, potato-like structures,” scientists say, with “fruit-bodies” packed with aroma and flavor. These growing conditions lead to a complex, layered, and prized taste. White truffles can cost thousands of dollars a pound; they were dubbed the “most expensive food in the world” by 60 Minutes in 2012.

Even so, the lengths people go to to protect this knobby fungus are borderline bizarre. Companies have had to buy special security equipment to keep thieves from ramming trucks into truffle warehouses. The dogs that hunt the tubers face the threat of rival hunters’ poison. Manufacturers have been caught cutting lower quality truffles into high-grade ones like cocaine.

As Ryan Jacobs, author of the new book The Truffle Underground: A Tale of Mystery, Mayhem, and Manipulation in the Shadowy Market of the World’s Most Expensive Fungus, dug into the world of truffle production, he found a series of mysteries to solve—both literal and figurative. There was a murder, a few thefts, a global production scandal, and a lingering question: What about the truffle makes people act like this? Jacobs joined us on the most recent episode of Bite to talk through some of his theories:

One theory is that the high cost—and high stakes—of the truffle trade are due to how hard it is to cultivate them. “Nobody knows,” Jim Trappe, a leading fungi researcher told Jacobs when he asked about the perfect way to grow a truffle. The tuber does grows best under certain trees, preferably oaks and hazelnuts. We know dogs or pigs can sniff them out when they’re ripe. But beyond some basic facts, the specifics are still unclear. Farmers don’t know the exact levels of moisture or ranges of temperature needed to guarantee the bulbs mature. “[H]alf a dozen times at least, I think got it figured out: ‘Okay, you need this kind of weather pattern and so forth,'” Trappe told Jacobs. “And then there comes along a year that totally destroys what I have thought I had understood.” To complicate matters, some traditional truffle sellers in Italy and France would like to have you think that the only “authentic” versions can be grown in their soil. (And according to National Geographic, new research suggests that climate change is making it harder to grow truffles in that part of the world).

What about the truffle makes people act like this?

But while harvesting the fungus is hard, it’s far from impossible. Truffles can actually be planted en masse, and harvested on orchards. Staci O’Toole, known as the Truffle Huntress, is part of a growing group of truffle farmers in the United States and outside of Europe. She and her partner planted a truffle orchard three years ago, in Placerville, California. She recently picked the first one of this season. “We’ve proven that it can be done,” she said. “It’s kind of like the whole Napa Valley wine thing. Everyone said, ‘Well, they could never be as good as France.’ Now, we have some of the best, world-class wines coming out of Napa. And the truffle, believe it or not, is very similar.” She says her truffles, in part because of freshness, sell at a premium to local chefs over the ones flown in from Italy or France.

There’s a “mythical aspect” to the truffle, notes O’Toole, that explains its high price. The truffle is grown underground, it’s hard to unearth, and it’s steeped in folkway. Low supply gives the item a “mystique,” she adds.

Much of the truffle oil on the market is made from a synthetic flavoring. So, if you want to get the taste of a real truffle, you have to enter the world of luxury. I tried my first-ever fresh truffle this summer, at a five-course meal at a fancy restaurant in San Francisco as part of a PR event hosted a major importer. My first bite of a winter truffle in a Risotto al Salto with egg and guacamole blew me away. The taste was earthy and pungent, rich without being heavy.

But the taste was impossible to divorce from the indulgence. A spokeswoman told me I was privy to a flavor that couldn’t even be grown in the United States and was flown in, just for me. (I guess she hadn’t yet heard about the Truffle Huntress.) The line made everything taste better. The moment was, now, special.

One doesn’t casually eat a truffle. One has to fly to Italy, the tradition says, to truly taste the delicacy (that is, if one is Oprah). “No one really has truffles for breakfast,” O’Toole said to me, and then laughed. “Well, except for me when I have too many of them.”

For the rest of us, part of enjoying truffles might be that we can’t just have them whenever we feel the craving.