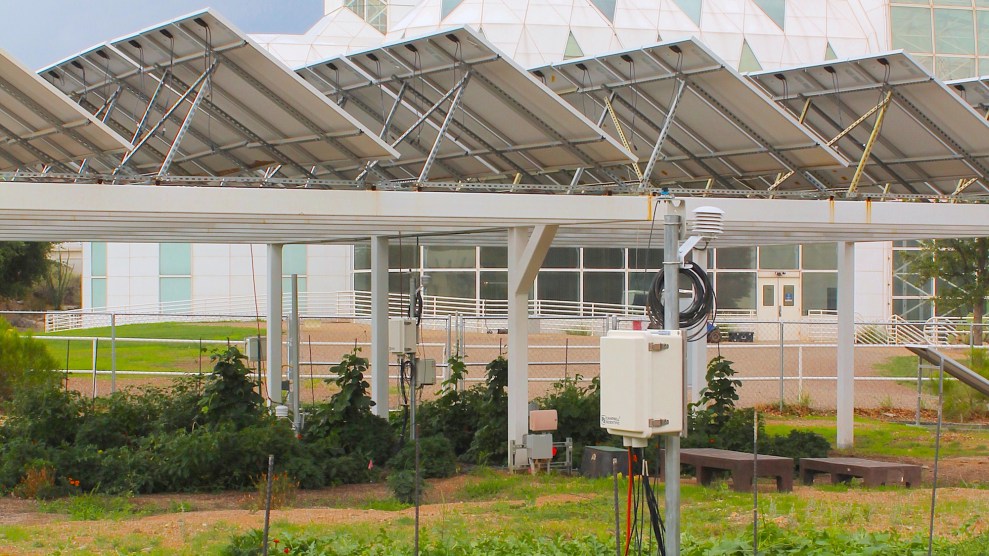 Even after a boom in recent years, solar energy delivers less than 2 percent of power generation to the US electrical grid. But if we’re going to avoid the worst impacts of climate change, the sun’s contribution is going to have to ramp up dramatically. Where to put all the solar panels? You might envision vast solar farms stretching across the sun-scorched lands of the Southwest. But according to two recent papers—one from Oregon and Utah researchers, another from a team centered at the University of Arizona—a much different kind of landscape makes the most sense for harvesting solar power: the land currently occupied by food farms.

That’s because the technology that drives solar power—photovoltaic (PV) panels made of silicon that convert light photons directly into electricity—works most efficiently under a specific set of conditions. Most important for this power, of course, is abundant sunlight, which is why deserts make tempting sites for solar energy production. But air temperature is important, too. Above the threshold of 78°F, the hotter it gets outside, the less efficient PV panels are at converting sunlight to electricity. And that’s why blazing-hot deserts pose some problems for solar panels.

In addition to plenty of sun and moderate temperatures, solar works best in regions with light winds and low humidity. Bringing all of those factors together, the Oregon/Utah authors found that regions currently covered with crops and grass provided the most optimal conditions for solar all over the world. Barren terrain, the kind of parched desert landscape I associate with big solar installations, came in fifth.

It makes sense that plants and solar panels do well in similar microclimates, the authors note. “One could think of agriculture as a form of solar harvesting where the sun’s energy is stored in the chemical bonds of the plant matter,” they write. “And agricultural activities already occupy those places on earth most amenable to solar harvesting.”

When I first picked up the report, I thought the authors were suggesting that some farmers should switch from food production to solar production. Turns out that the two activities can co-exist. Raising the panels up off the ground leaves room for people and animals to move in under them. Their shading effect can actually help some crops by reducing heat stress; the cover also saves water in farming by cutting down evaporation.

Two of the paper’s authors, Oregon State University researchers Elnaz Adeh and Chad Higgins, co-authored a 2018 PLOS One study looking at grass production on a solar installation on a pasture near Corvallis, Oregon. Their finding: Areas covered by the panels generated 90 percent more grass than before, using a fraction of the water. Similar projects are showing promising results in  Germany and Massachusetts.

University of Arizona researcher Greg Barron-Gafford leads a team assessing the benefits of combining solar panels with working farms in the hot, arid southwest. They have a paper, out this week in Nature Sustainability, reporting on the results of a project in which tomatoes and hot peppers were grown under solar panels. The results were positive. The shade helped crops thrive—and saved irrigation water—through the scalding Arizona summer; in turn, the plants helped cool the solar panels, increasing their efficiency.

The researchers chose three crops for the study.  Chiltepin pepper, a wild chili common along the southwestern borderlands, saw its production triple under the panels compared to an unshaded control; jalapeño pepper production was roughly the same in both settings; and cherry tomato output doubled under PV cover. As for water, soil under the panels retained between 5 percent and 15 percent more moisture between irrigation events.

The relationship benefited the panels, too. Across the growing season, PV panels placed over crops were significantly cooler than their peers placed over bare ground, and as a result churned out about 3 percent more electricity.

“One of the reasons we got into this research is we kept finding that large-scale solar arrays create this heat-island effect,” he said—and the higher temperatures reduce the panels’ electricity output. “We thought, well part of the reason probably is that they always clear the vegetation out—so why don’t we stick some vegetation back and get that transpiration effect going?”

So far, it has been hard to get farmers to bite on growing crops under solar arrays, Barron-Gafford said. Covering large portions of fertile fields with sun blockers remains counterintuitive. But as climate change proceeds, irrigation water in the arid southwest will get more expensive, and demand for carbon-free energy will grow. Agrophotovoltaics—as the overlap of food and solar farms is known—can help with both, without hurting crop yields.