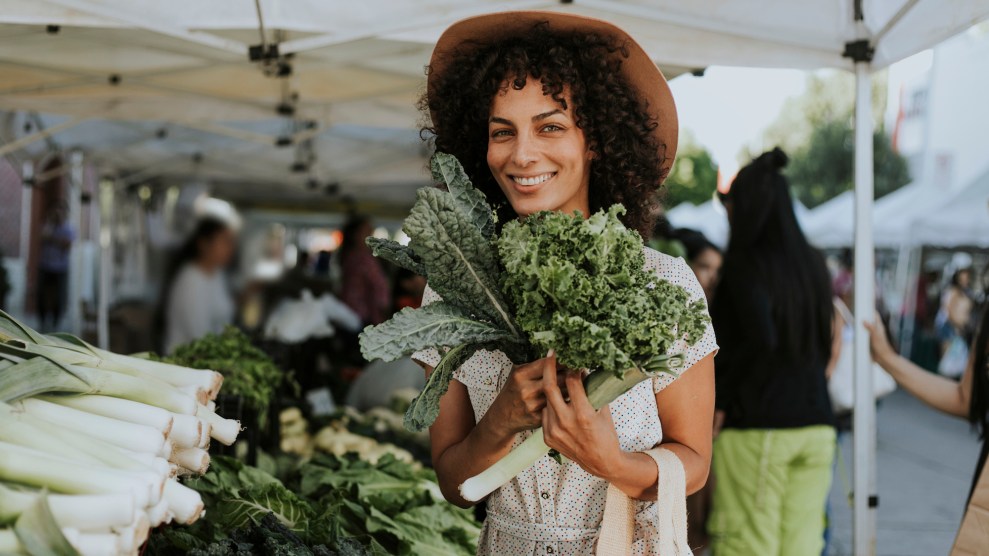 Y'all stop hating on kale.Rawpixel/iStock/Getty

Remember the kale craze? Well, according to Amanda Mull over at the Atlantic, it’s over. And what’s more, Americans pretty much always hated the thick-leaved green, even way back in the mid-2015s, when it was common to see bearded men out and about in “Eat More Kale” t-shirts.

Provocatively, Mull argues that Americans hated kale even when it was all the rage. She notes that Google searches for kale have for years spiked in January, when “America is ready to repent for the imagined sins of ‘enjoying food’ and ‘cooking things that taste good.'” In other words, kale only rose in popularity because it seemed virtuous; after confronting the reality of actually eating it, Americans decided it sucked. Here’s Mull:

Kale, in particular, has a natural taste and texture—bitter, tough, laborious to chew—that is off-putting to many. Including it in a dish takes work and know-how, even if you’re just making a salad. (Raw kale has to be … massaged? Finely chopped? Beaten into submission?)

Helen Rosner, the New Yorker’s food correspondent, raised her voice to second this analysis of kale in a Twitter thread, and add a twist: “Human bodies don’t like raw kale, which is why any kale recipe from before the kale boom involves either cooking it for-fucking-ever or, if it’s raw, pseudo-cooking it by slicing thinly, denaturing in a high-acid dressing, and physically massaging it to break it down further.”

Human bodies don’t like raw kale, which is why any kale recipe from before the kale boom involves either cooking it for-fucking-ever or, if it’s raw, pseudo-cooking it by slicing thinly, denaturing in a high-acid dressing, and physically massaging it to break it down further

Here’s the thing. Mull and Rosner are probably right that kale was never all that beloved, and that the boom involved “millions of people literally eating kale wrong and pretending to love the misery of their error,” as Rosner put it.

But I disagree that kale is an especially hard-to-love foodstuff. Plus, it isn’t unusual for ingredients to require a little prep before enjoyment. You can buy an apple or some strawberries, immediately bite into them, and have a great experience. Almost all other non-fruit ingredients, though, require some prep.

Beef steak, for instance: You wouldn’t bring one home and just bite into it. You’d be better off searing it medium-rare. If you love mushrooms, you know that they taste, at best, like cardboard when raw. Sautéed in a flavorful fat with garlic, they can be sublime. Asparagus? Raw, it’s okay, I guess, if it’s truly fresh. You’d still enjoy it much more lightly steamed and served with aioli, or roasted.

In other words, like most delicious things, kale improves dramatically with some kitchen doctoring. Does it require particularly skilled cooking? Does it need to be cooked “for-fucking-ever”? No, and no.

Like most delicious things, kale improves dramatically with some kitchen doctoring.

Let’s go back to much-maligned kale salad. For me it works best when you have a really fresh bunch of that long, skinny variety known as Lacinato or Tuscan, preferably picked in late fall, when it has endured a frost. That insult seems to amp up kale’s sweet and peppery qualities.

But really, you can make a decent salad with any old kale. I delivered a quick history of kale salad and a recipe for it here, during the height of the boom. Essentially, make (or buy) a flavorful dressing, shred or chop your kale, combine it all in a bowl, and give it a good massage with your bare hands, for less than a minute. If you’re too delicate to lay hands on shredded greens and vinaigrette, no worries. Just toss it thoroughly and let it sit in the fridge for a few hours or overnight— the oil in the dressing will break down the kale into something delicious.

All of that said, it’s perfectly wise to leave salad to delicate greens like lettuces and arugula, and reserve kale for quick braising. That’s where it really shines. Properly cooking kale is a lot like properly cooking most vegetables. Here goes (more detailed recipe here): Sauté a thinly sliced or chopped onion in olive oil until it’s translucent. Add some minced garlic and crushed red chili flakes, let it sizzle a bit. Then add thinly sliced kale and a splash of water or stock. Cover, and let simmer until you find it pleasantly tender, stirring occasionally. When it’s done to your liking—which will take a mere 10-20 minutes—remove the lid and let the excess liquid cook off. Season with salt and pepper, and you’ve got a wonderful, fairly simple dish.

From here, you can go in multiple directions. Add a splash of acid—lemon juice or vinegar—and hit it with a drizzle of olive oil, and dig into a great side dish. Fancy it up by transforming it into a rich gratin. Make it into a meal by incorporating it into a fast-and-simple fried rice. One of my go-to fast dinners is to toss a big batch of braised kale with whole wheat spaghetti and a can of chickpeas or white beans, and garnish with Parmesan cheese, toasted walnuts, and more olive oil.

So, sure: Maybe America never really did love kale, despite the boom, because people were cooking it wrong en masse. But cooking it right is neither difficult nor time-consuming. And done right, it’s really good. Just ask Helen Rosner. She actually fuckin loves the stuff.

For the record I fuckin love kale