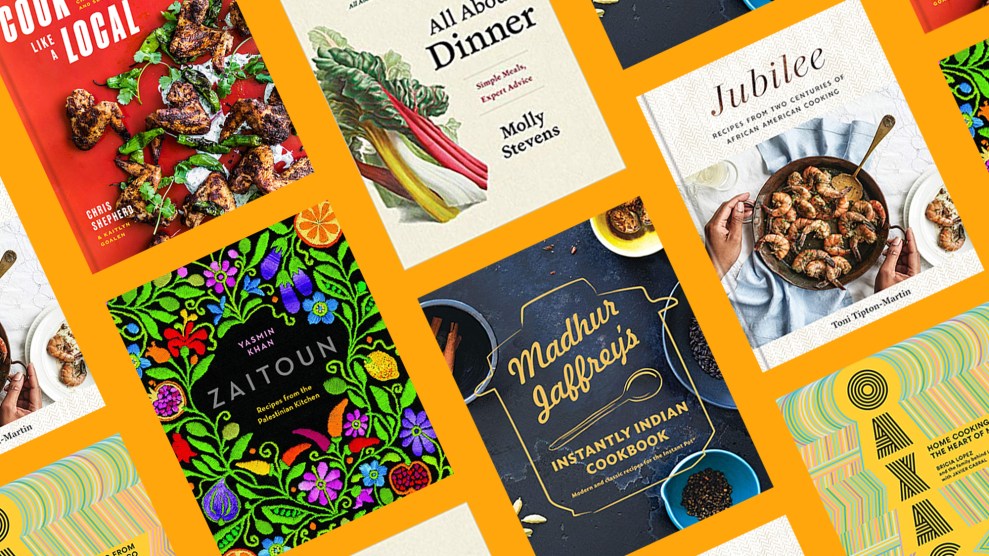 For last-minute holiday presents, it’s hard to beat the humble, tangible book. Some of the worthies on your gift list will be of the kitchen-obsessed—or kitchen-curious—persuasion. With them in mind, here are the most interesting and inspiring cookbooks that crossed my desk in 2019.

As a settler-colonial nation founded by slaveholders who congratulated themselves on their reverence for freedom, the United States has long had a hard time reckoning with the immense and fundamental contributions of black cooks to the nation’s foodways. One problem is the narrowing of African-American culinary experience in the popular imagination.

In popular culture, black cooking is often reduced to soul food, a legacy of slavery “crafted by ingenious and industrious field hands in the slave cabin, from meager ingredients, informed by African techniques,” writes Toni Tipton-Martin in her fantastic new book. But there are many other, equally vibrant branches of culinary heritage that are too often obscured. There’s a deep strain of “lavish cooking” with fancy ingredients in the “plantation kitchen or in kitchens staffed or owned by people educated formally or informally in culinary arts.” Thomas Jefferson is credited with establishing French culinary tradition as refined food for the US haute bourgeoisie—but he did so through the unheralded work of enslaved chef James Hemings. Then there was the Great Migration, the 20th century fanning out of a black population that had been largely concentrated in the former slave states, introducing new influences, ingredients, and opportunities for innovation. Tipton-Martin’s ancestors migrated west to Los Angeles, where she grew up imbibing “decidedly bourgeois, Latin, and vegetarian sensibilities.”

Jubilee is Tipton-Martin’s much-anticipated followup to her landmark 2015 The Jemima Code, a painstakingly researched annotated catalogue that illuminates nearly 300 mostly forgotten cookbooks by African-American authors. In her current book, Tipton-Martin leans on that scholarship and her own adventurous palate to bring it all home. Here, you’ll find a simple, hauntingly delicious recipe for collard greens and corn dumplings; a silky peanut soup that nods both to the great agriculturalist George Washington Carver and to Caribbean creole cooking; beets Étouffée, a bold mash-up of modern California and traditional Louisiana styles; and much more.

Oaxaca: Home Cooking From the Heart of Mexico, by Bricia Lopez and Javier Cabral

If you’re looking for a sign that a place has a great food culture, walk the streets. Where vendors are peddling unforgettable food to working people on the sidewalk, cooks are probably also whipping up amazing meals in homes and fancy restaurants. Oaxaca, a state on Mexico’s southern Pacific coast, checks all of those boxes, with a bonus: It’s Mexico’s center of the smoky, beguiling cactus liquor called mezcal. In Bricia Lopez, we norteños have found an ideal guide to the region’s food, its endless variations of ground corn and numerous moles, velvety sauces made of dried chili peppers and various fruits, nuts, and spices. Lopez has roots on both sides of the border. She grew up in the village of Mitla, in a family of mezcaloros (mezcal makers). Her father, Fernando Lopez, migrated to Los Angeles in the wake of Mexico’s 1994 economic meltdown, where he ultimately founded Guelaguetza, a beloved Oaxacan restaurant in Koreatown.

In Oaxaca, Lopez has delivered a smart, pithy guide to her homeland’s culinary genius. There is one catch. To unlock the glory of Oaxacan food, you can’t rely on store-bought tortillas or the just-add-water tortilla flour known as Maseca. You’re going to need access to top-quality masa: corn that has been cooked with mineral lime—a process called nixtmalization—and ground to a paste. It’s the basis for not just tortillas, but also tamales and tlayudas—a kind of massive tortilla that is the star of Oaxacan street food. The book features a recipe for home-made masa, which is easy to make if you have a metate (stone grinder). Or you can do what I do: find a restaurant in your city that will sell you some masa from nixtamalized corn.

It offers no fewer than five distinct variations on chilaquiles.

That said, the book has plenty of non-masa-based dishes, like “salsa de carne frita”—caramelized pork ribs in a sauce of tomatillos and morita chilis. And it offers no fewer than five distinct variations on chilaquiles, the beloved Mexican breakfast of fried tortillas smothered in salsa. For chilaquiles, Lopez cuts some slack on the quest for good masa: for that dish, she calls for “preferably store-bought” tortillas.

Zaitoun: Recipes and Stories from the Palestinian Kitchen, by Yasmin Khan

Over the past decade in the Anglo-American world, there’s been a boom in high-profile, excellent eastern Mediterranean cookbooks and restaurants, led largely by Israel-born chefs like London-based luminary Yotam Ottolenghi and Philadelphia’s Michael Solomonov. Except for Jerusalem, Ottolenghi’s landmark 2012 collaboration with his Palestinian business partner Sami Tamimi, Palestine has largely been left out of this conversation. In Zaitoun (Arabic for “olive”), Khan—a former human rights campaigner and current food journalist—shines a light on Palestinian foodways.

A Londoner of Pakistani-Iranian heritage, Khan got a taste of life under occupation on arrival at the Tel Aviv airport, where she was subjected to several hours of “increasingly probing questions about my work, my family, my childhood, my health, my relationships, and my political affiliations,” she writes in the introduction. Once she crossed that hurdle, she journeyed through the region, eating in restaurants and meeting Palestinian cooks in the West Bank and in Israel, learning recipes alongside them in their kitchens. Khan couldn’t visit occupied Gaza for her trip, because it remains under siege and sealed off by the Israeli government. She compensated by talking to Gazan expats, and she sketches out a cuisine that will make your mouth water: lots of seafood and beans enlivened by fresh dill, chilis, garlic, sumac, and pomegranate paste.

It’s haunting to enjoy a simple, perfect dish like lentils with chard and tahini knowing that, as Khan reports, “80 percent of Gazans rely on food aid to survive and malnutrition is rife.” Zaitoun belongs on the shelf alongside neo-Mediterranean classics by the likes of Solomonov and Ottolenghi. And since she’s a non-chef who writes for home cooks, she brings a refreshingly non-fussy perspective to the mix. Also, if you’re looking for “plant-based” cooking ideas that don’t involve the Impossible Burger, Khan’s book has loads of tantalizing ideas for variations on legumes, grains, and vegetables.

All About Dinner: Simple Meals, Expert Advice, by Molly Stevens

In her career as a culinary-school instructor, Stevens regularly got the same question from her aspiring-chef students: What do you cook at home? This book is her extended answer: a guide to putting an appetizing dinner on the table after a long day of work, without elaborate preparations or reliance on a dizzying list of ingredients.

The book reminded me of a powerful, dead-simple technique I hadn’t ventured in years: what the French call en papillote, simply enclosing serving-size fish filets in parchment paper with a few other ingredients, some fat, and a splash of wine. You place the packets on a sheet pan and bake them for about 15 minutes, during which time the filets steam in their own juices and the wine, which forms a light sauce with the fat. Then you slice them open at the table, creating a dramatic burst of steam. The combination Stevens proposes—cod, spinach, cherry tomatoes, shallots, and butter—make a magical self-contained dinner.

Stevens also added a new grain to my regimen, to place alongside freekah and farro: sorghum, which I had previously known only as the basis for a distinctive molasses-like sweetener. Actually, she reports, it’s a high-protein staple grain in much of the word, and her quick-and-easy recipe for whole-grain sorghum with sauteed mushrooms and miso demonstrates what we’ve been missing. For aspiring cooks looking to learn basic skills while getting dinner on the table in a reasonable amount of time, Steven’s book is a treasure. Ditto for the experienced home cook looking to be re-inspired.

Two decades ago, I learned indelible lessons cooking through the books of Madhur Jaffrey, the veteran food writer and former actress. She taught me the patience and diligence required to caramelize onions, and that spices bloom in flavor and aroma when you fry them in fat. Now she’s out with the best guide I’ve seen to cooking Indian food in that all-in-one kitchen wonder, the Instant Pot. As Kiera Butler reported in 2017, the Instant Pot was drawing attention from Indian home cooks living in the United States for years before it became a massive national hit. Jaffrey demonstrates what all the fuss was about, showing how the machine’s saute and pressure-cooker functions can streamline Indian cuisine’s glorious array of braised meats, legumes, and vegetables.

Cook Like a Local: Flavors that Can Change How You Cook and See the World, by Chris Shepherd & Kaitlyn Goalen

For Shepherd, chef-owner of Houston’s celebrated Underbelly restaurant group, “local food” isn’t just about shopping at the farmers market. It’s also about “the people who live in my community, the people who inspire me and teach me and work with me, and how they like to cook and eat.” Since he’s based in Houston, his vision of local food means lots of chili peppers, fish sauce, soy sauce, and masa. This book is a valentine to one of the globe’s most diverse cities.

The heart of the book is a long section on fish sauce, the magical concoction that has ramped up umami from ancient Rome to present-day Asia. Here, Shepherd taps into the foodways of Houston’s deeply rooted Vietnamese community, which has seamlessly fused old-country preparations with the Gulf coast’s seafood bounty. Don’t miss his take on red snapper served over rice noodles and a riot of herbs. Hot tip: Cook Like a Local taught me that the widely available Red Boat brand of fish sauce is an artisanal product containing just anchovies, sea salt, and water, made on the Vietnamese island of Phú Quốc.