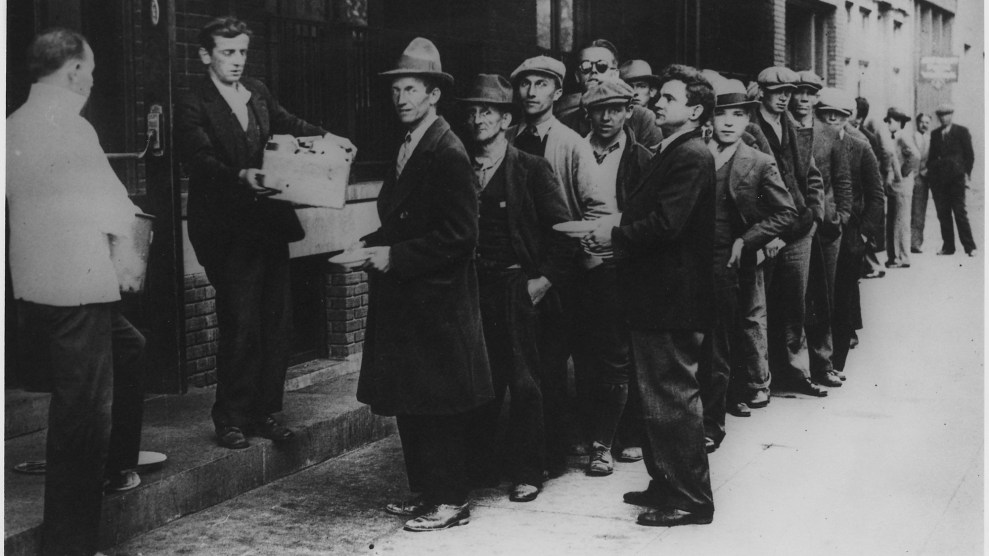 During the Great Depression, the United States encountered a food paradox: rampant unemployment left millions of people struggling to find enough to eat, even as low prices and overproduction led to a surge in farm bankruptcies. As the economy seizes up during the COVID-19 lockdown, are we heading in a similar direction?

Here’s NPR’s Dan Charles, reporting on how the collapse in sales to now-shuttered restaurants and institutional cafeterias is forcing farmers to “dump thousands of gallons of milk that no one will buy” and abandon “harvest-ready fields of tomatoes, yellow squash and cucumbers”:

“We cannot pick the produce if we cannot sell it, because we cannot afford the payroll every week,” says Kim Jamerson, a vegetable grower near Fort Myers. Those crops will be plowed back into the ground. “We’ll have to tear ’em up,” Jamerson says. “Just tear up beautiful vegetables that really could go elsewhere, to food banks, and hospitals, and rest homes.”

Meanwhile, skyrocketing layoffs and the federal government’s slow relief efforts have caused a spike in demand for food aid, “just as the nation’s food banks are being struck by shortages of both donated food and volunteer workers,” The New York Times reports. Here’s the queue for a food bank in San Antonio, according to the San Antonio Express-News.

Brodesky: An endless need for food in a line that never ends https://t.co/CzOJgzhOM3

So, on the one hand, farmers losing money while good food goes to waste; on the other, loads of hungry people.

Is there any way to address these dire crises in one go? The answer is yes, and it comes from, of all places, President Donald Trump’s US Department of Agriculture.

In 2018, the Trump USDA intervened in food markets to prop up the ag economy, which had been hammered by the president’s trade war with China. Tapping a Depression-era agency called the the Commodity Credit Corporation, which can spend money without authorization from Congress, the USDA devoted $1.2 billion to buy “commodities unfairly targeted by unjustified retaliation” and distributed them to “nutrition assistance programs such as The Emergency Food Assistance Program (TEFAP) and child nutrition programs.” As the trade war dragged on in 2019, the USDA repeated the trick, devoting another $1.4 billion to the program.

Trump’s trade war was a ginned-up emergency for farmers: The president antagonized a massive trading partner, which predictably retaliated by imposing stiff tariffs on US-grown soybeans and pork. The administration showed no reticence about putting the force of the state behind cleaning up the resulting mess.

By contrast, COVID-19 has generated a massive humanitarian crisis; to limit its spread, the economy has shut down, leaving millions without income or a plan to put food on the table. This is a real emergency. Now would be a good time to crank up the CCC again: buy food from farmers who are now wasting it and distribute it to food banks, which are being overwhelmed with people in need.