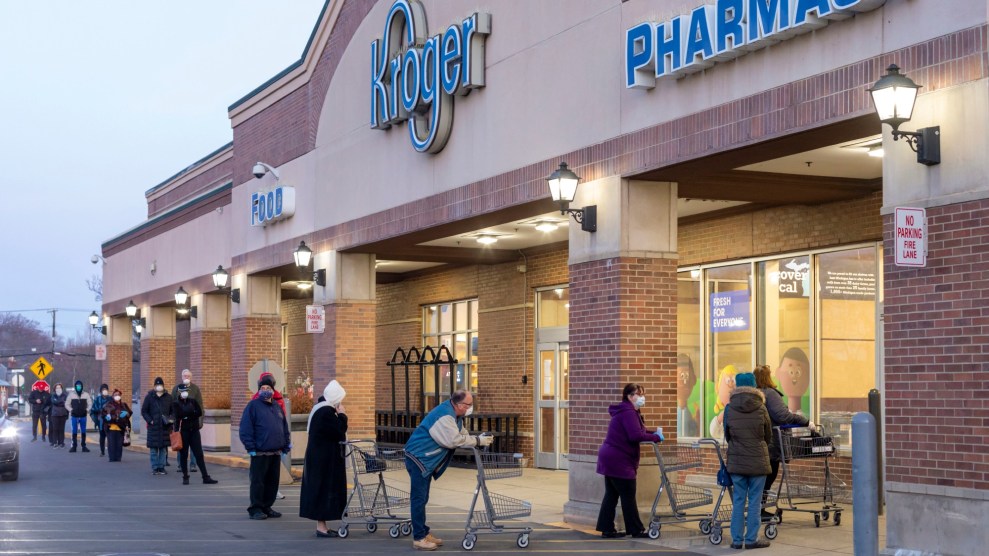 Senior citizens line up at dawn waiting for the opening of a Kroger supermarket. Kroger is among more than 40 grocery chains that recently ended their $2 hourly "hero" pay raise for workers.Jim West/Zuma Wire

When Larry Franklin received an emergency coronavirus paycheck for $818.76 from the Ralphs grocery store where he’s worked for six years, he thought it was a sign of appreciation from his employer.

Franklin, a 39-year-old immuno-compromised cancer survivor, has been in quarantine since March. After working through the early pandemic days of panic-shopping, preparing carts for a deluge of customers lining up two hours before the store opened, his doctor ordered him to stay home. He received one week of paid sick time and a $300 bonus, but otherwise has been on unpaid leave.

But two weeks after he received the emergency check, he got a letter from the store’s parent company, Kroger, asking him to pay the money back. He had already spent it, paying off bills and buying groceries from the same Los Angeles–area Ralphs store where he works.

“That’s when my jaw dropped,” Franklin says. “I cannot believe you would put a policy in place and retract it for people who are really in dire health need right now.” (According to Kroger, the check was an error, but the company has since backtracked on its plans to ask employees like Franklin to return what it calls “overpayments.”)

“As you must know, this pandemic is not over…every one of your food and grocery store workers are still being asked to risk exposure to this virus.”

Franklin is strategizing with his doctor about how to return to work safely. But even if he returns, he won’t be able to count on the “hero” pay his colleagues earned for the past two months: Kroger is one of more than 40 grocery companies ending the temporary pay boosts it implemented for workers at the beginning of the pandemic, according to the United Food and Commercial Workers union. Kroger’s subsidiaries, including Fred Meyer, Harris Teeter, Mariano’s, and Ralphs, ended their $2-an-hour “hero pay” increases on May 17. Instead of an ongoing wage hike, Kroger will pay a one-time “thank you” bonus of $400 to full-time employees and $200 to part-time associates.

The pay cuts come as states push to reopen after the initial coronavirus shutdown. Yet even as more businesses are reopening and restrictions are lifted, the pandemic shows no signs of slowing. According to the UFCW, at least 68 grocery workers have died from COVID-19 and more than 10,000 have been infected or exposed. Essential workers’ “hero” status is at a crossroads: While Congress considers raising pay for frontline workers, many companies are cutting back on their temporary hazard pay.

“As you must know, this pandemic is not over,” Marc Perrone, the international president of UFCW, wrote in a letter to the CEOs of 49 grocery companies ending their pay raises. “To the contrary, every one of your food and grocery store workers are still being asked to risk exposure to this virus and work in dangerous conditions that require them to wear protective equipment on the job.”

A Kroger spokesperson told Mother Jones that without the temporary pay raises, its average pay rate was more than $15 per hour. “We also provide our associates with health care and retirement benefits that many of our competitors do not offer their employees,” the spokesperson said. “This was true prior to the pandemic and remains true today.”

Some companies are rolling back their pay raises even as their profits soar. Amazon CEO Jeff Bezos’ wealth has grown by $34.6 billion just since mid-March, according to a new report from Americans for Tax Fairness. “There’s no question that Amazon can afford to protect its workers and to provide hazard pay and paid sick leave,” former Labor Secretary Robert Reich told me this week. “But Amazon has chosen not to be a leader, even though it is making huge amounts of money off the backs of a lot of very, very hard working people who are risking their lives in warehouses and in Whole Foods stores.”

Amazon is ending its workers’ temporary $2 hourly pay raises at the end of May. “With demand stabilized, next month we’ll return to our industry-leading starting wage of $15 an hour,” an Amazon spokesperson wrote in an email. “We’re proud that our minimum wage is more than what most others offer even after their temporary increases in recent months, and we hope they’ll do the right thing for the long term and bring their minimum pay closer to ours.”

As more companies end temporary pay raises, Congress is considering boosting pay for frontline workers. On May 15, the House of Representatives passed a $3 trillion package that includes many of the provisions from Sen. Elizabeth Warren (D-Mass.) and Rep. Ro Khanna (D-Calif.)’s Essential Workers Bill of Rights. The bill, called the Heroes Act, includes a $13 per hour pay raise for essential workers during the public health emergency, as well as personal protective equipment and support for child and elder care.

Sen. Mitt Romney (R-Utah) has expressed support for a similar pay bump of an additional $12 an hour for frontline workers. But the Senate has yet to take up the bill. Senate Majority Leader Mitch McConnell called it “an 1,800-page seasonal catalog of left-wing oddities.” On Fox News, Sen. John Kennedy (R-La.) told Sean Hannity the Heroes Act was “grandiose” and said he didn’t think the Senate would pass it in any form. “It’s not a coronavirus bill,” he said. “It’s basically a ‘remake Western civilization’ bill.”

House Speaker Nancy Pelosi accused the Senate Republicans of prioritizing “political retribution” over the needs of working families. “McConnell and the Senate GOP need to come to the negotiating table to help deliver the relief that families desperately need,” she said in a statement.

Many frontline workers never received hazard pay at all. For some, the recognition as “heroes” makes them feel like their work is seen for the first time—but they’re still not getting properly compensated for it.

“When this moment is over, will you continue to call us essential?”

“The part that really bothers me and angers me to the core of my soul is that now all of a sudden we’re essential workers when we’ve been doing this all along,” said Steve Kelley, a commercial cleaner from Pittsburgh, in an April Zoom rally for the proposed Essential Workers Bill of Rights with Reps. Warren and Khanna. “All along we’ve been cleaning your bathrooms and you never noticed. When this moment is over, will you continue to call us essential? Will you provide us with essential worker pay?”

Reich told me the absence of protections for workers who are risking their lives every day could fuel an increase in labor strikes, already on the rise before the pandemic. “After risking their lives in the way they have been and after putting up with the lack of paid sick leave, a lack of paid family leave, lack of hazard pay, I think workers have had enough,” he said. “Frankly, I think that we’re going to see a wave of labor activism such as we haven’t seen in this country in decades.”

Since the pandemic began, workers have gone on strike at big tech companies like Amazon and Instacart, retailers like Whole Foods and Target, fast food restaurants, and clothing factories. In some industries, workers have won protective gear and the right to paid sick time. Through the Families First Coronavirus Relief Act passed in March, Congress extended coronavirus-related paid sick and family leave to workers across the country. But because of a loophole that exempted big companies, 85 percent of workers in essential grocery, pharmacy, and retail jobs remain unprotected, according to the University of California–Berkeley’s Shift Project. The Heroes Act would close this loophole.

With or without more protections from Congress, Steve Kelley has no intention of returning his janitorial work to the shadows. “No longer should we be considered invisible,” Kelley said during the Zoom rally, “because now you realize how much you need us.”

Warren agreed. “You’ve always been an essential worker, and now people are beginning to notice,” she told Kelley. “This is about building an America that recognizes your worth.”