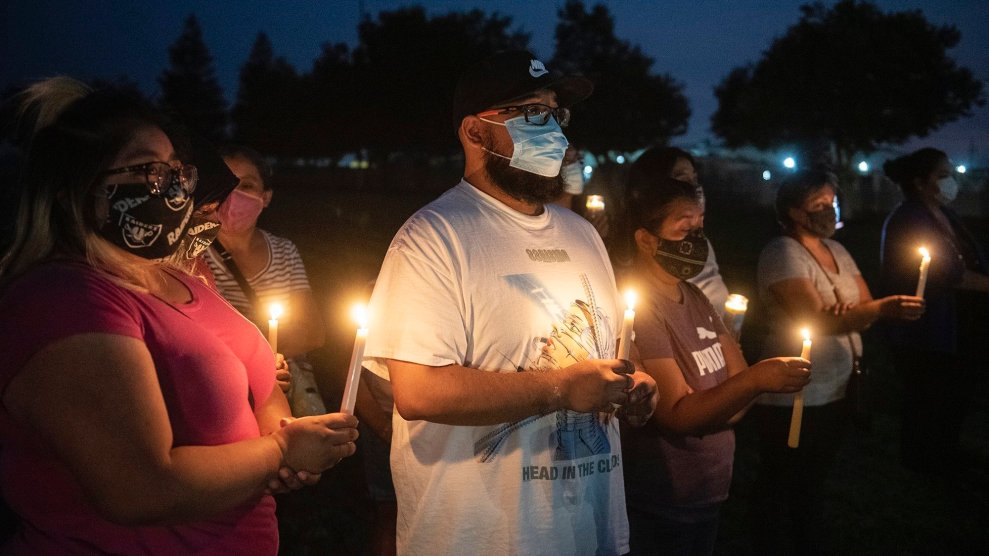 On Sept. 3, 2020, people gathered for a candlelight vigil to honor the eight lives lost and hundreds of families impacted by a COVID-19 outbreak at Foster Farms' plant in Livingston, Calif. Andrew Kuhn/The Merced Sun-Star via AP

The coronavirus has fallen heavily on the people who cut and pack the US meat supply. After blitzing meatpacking plants all spring and summer, the illness has infected at least 43,100 of these workers and killed 206, according to the running tally kept by the Food and Environment Reporting Network’s Leah Douglas. Lately, new cases and deaths within the industry have been leveling off, according to Douglas’ data. And media attention has shifted from the deadly toll on workers to the gentle penalties the Trump administration has imposed on the massive companies that dominate the meat industry for their worker-safety performance during the crisis.

Though it’s failed to garner much national attention, the deadliest meatpacking outbreak of all has unfolded in recent weeks in California’s agriculture-dominated San Joaquin Valley. On September 1, West Coast poultry powerhouse Foster Farms closed its Livingston, California, chicken plant by order of the Merced County Department of Public Health, after acknowledging 392 positive COVID-19 tests and eight deaths among employees. After another plant employee who had been hospitalized with COVID since August died in mid-September, the outbreak’s death toll now stands at nine, the most COVID-related fatalities of any single meatpacking plant, according to FERN’s Douglas.

Could the company have done more to prevent the outbreak? The Merced County health department repeatedly warned Foster Farms to ramp up efforts to protect its employees, before any deaths occurred. In an August 27 press release, the health department reported that it had been unsuccessfully urging Foster Farms to take precautionary safety measures since late June, a “month prior” to any COVID-related deaths.

On June 29, as COVID cases at the plant “continued to rise,” county health officials inspected the plant. To limit the outbreak, the health department suggested “significant changes to the employee break spaces and performing widespread testing of employees within the facility.” The department continued to call for a testing ramp-up throughout the month of July, but by the final days of the month, Foster Farms had “tested less than 10 percent of the department with the largest [COVID] impact within the facility,” the report states. Among the employees who were tested, more than 25 percent turned up positive.

In August, the department stepped up its campaign to push Foster Farms to increase testing and tweak common areas. On August 3, officials made a second visit to the Foster plant—this time accompanied by representatives of Cal/OSHA, the state’s worker-safety enforcement agency. On August 5 and 11, the department repeated its call on the company to increase employee testing and tweak common areas to enable social distancing. Meanwhile, the coronavirus continued to spread through the complex, “posing a significant threat to Foster Farms employees and the surrounding community,” the health department report states. Finally, on August 27, two months after its initial call for common-area changes and widespread testing, the health department ordered the plant to close, pending universal employee testing and “significant changes” to all break spaces and “areas of potential congregation” to “ensure adequate social distancing of all workers on the plant.” In the period of time between the initial June 29 recommendations and the August 27 close order, eight workers died of COVID-19.

The company failed to keep workers informed about the outbreak as it spread through the plant over the summer, says Erika Navarrete of the United Farm Workers of America, which represents the plant’s workers. Workers have told Navarrete that Foster Farms has only given them two masks per person total since the start of the pandemic, so they’ve had to buy this crucial protection themselves. And while the company has installed plexiglass barriers between stations on the facility floor, “workers are still too close together,” working shoulder-shoulder on the line, says Navarrete, who has visited the plant several times. A Foster Farms spokesperson declined to comment.

The conditions described by Navarrete—masked workers toiling close together, separated by plastic barriers—appear to be standard poultry-industry practice during the COVID crisis. In an article entitled “Our #1 Priority: Keeping Chicken Company Employees Safe & Healthy During COVID-19,” the National Chicken Council—a trade group representing US chicken processors—includes the below photograph of workers on a chicken-production during the pandemic. A National Chicken Council spokesperson alerted me that meat giant Tyson Foods had posted the photo on a web gallery available to media showing the “protective measures” the company is taking in response to COVID-19.

Is the arrangement sufficient to protect workers from COVID? Federal worker-safety authorities are fuzzy on the topic. The US Occupational Safety and Health Administration has declined to issue binding workplace regulations to impede the spread of COVID. Along with the Centers for Disease Control and Prevention, OSHA released voluntary meatpacking-industry guidelines on July 26. The guidelines call on companies to “modify the alignment of workstations, including along processing lines, if feasible, so that workers are at least six feet apart in all directions (e.g., side-to-side and when facing one another), when possible.” They also suggest “physical barriers, such as strip curtains, plexiglass or similar materials…to separate meat and poultry processing workers from each other.” The guidelines don’t comment on whether barriers negate the need for social distancing.

OSHA has declined to issue binding workplace regulations to impede the spread of the virus.

Two independent occupational health experts I consulted say distancing is essential, with or without barriers in place. “Medical masks and plastic sheeting are not enough,” said David Michaels, who served as chief of the Occupational Safety and Health Administration under President Barack Obama and is now a professor of environmental and occupational health at George Washington University. He pointed to a July 2020 investigation by German scientists of a COVID-19 outbreak in a German meatpacking plant which found that “climate conditions and airflow” in these plants can “can promote efficient spread” of the virus at “distances of more than 8 meters,” or 26 feet. “Workers in poultry plants need greater distance between them, and they need respirators, not medical masks,” Michaels said.

Plastic barriers are “more effective in a grocery store situation where you’re having very quick interactions with people,” said Marissa Baker, director of the Industrial Hygiene Training program at the University of Washington’s Department of Environmental & Occupational Health Sciences. But in meatpacking plants, “you’re standing shoulder to shoulder with someone for eight hours a day—unless you’re in your own separate box, there’s definitely a chance for virus to get around those barriers.” She said a safer approach would be to keep the barriers but spread workers at least six feet apart—which would likely require the company to slow down its production. A slower line would also protect workers from COVID-19 in another way, Baker added: “When you have people working fast, people are breathing harder—and that leads to more particle generation,” and thus more potential exposure to pathogens.

“Medical masks and plastic sheeting are not enough,” according to occupational safety expert David Michaels.

When the COVID crisis took root in the spring, Foster Farms joined several other meatpacking companies in delivering its workers a salary bonus of $1 per hour for working shoulder-to-shoulder during a pandemic. But the company ended the bonus on May 31—just before the disease began to spread through the plant, Navarrete said. UFW is currently negotiating with Foster Farms on a contract for the plant’s workers, she added, and is demanding $2 per hour hazard pay for the duration of the pandemic.

It remains to be seen whether Foster Farms will face penalties for its management of the Livingston outbreak. So far, despite widespread contagion and fatalities in plants across the country, Trump’s OSHA has doled out two fines—at levels that Michaels, the former OSHA administrator, has called “less than a slap on the wrist.” Trump’s OSHA recently hit pork giant Smithfield with a $13,494 fine for an April outbreak that infected at least 1,294 workers and killed 4 at its massive pork operation in Sioux Falls, South Dakota; and it laid a $15,615 penalty on meatpacking behemoth JBS for an outbreak that led to 300 positive tests and six worker deaths at its Greeley, Colorado, beef plant.

In California, worker-safety laws are enforced by a state agency called Cal/OSHA, a division of the California Department of Industrial Relations. On September 9, Cal/OSHA hit mid-sized frozen-foods manufacturer, Overhill Farms, with a $200,000 fine, and levied another $200,000 one on the temporary-employment agency it uses, Jobsource North America. Their infraction, according to the press release: They failed to take measures to protect workers from COVID-19, resulting in “more than 20 illnesses and, in the case of Overhill Farms, one death.”

On September 8, Foster Farms reopened its Livingston plant after complying with health department conditions. Whether it will pay a price for the outbreak remains to be seen. In an email, a spokesman for the California Department of Industrial Relations wrote: “Cal/OSHA opened an inspection on July 23 at the Foster Farms in Livingston after notification that a worker died from complications related to a COVID-19 infection.” He declined to comment further on what he called an “ongoing inspection” of the plant, but added that “by law, Cal/OSHA has up to six months from the opening date of an inspection to issue citations.” In the meantime, dozens of workers in the plant continue to work shoulder to shoulder as the pandemic grinds on.