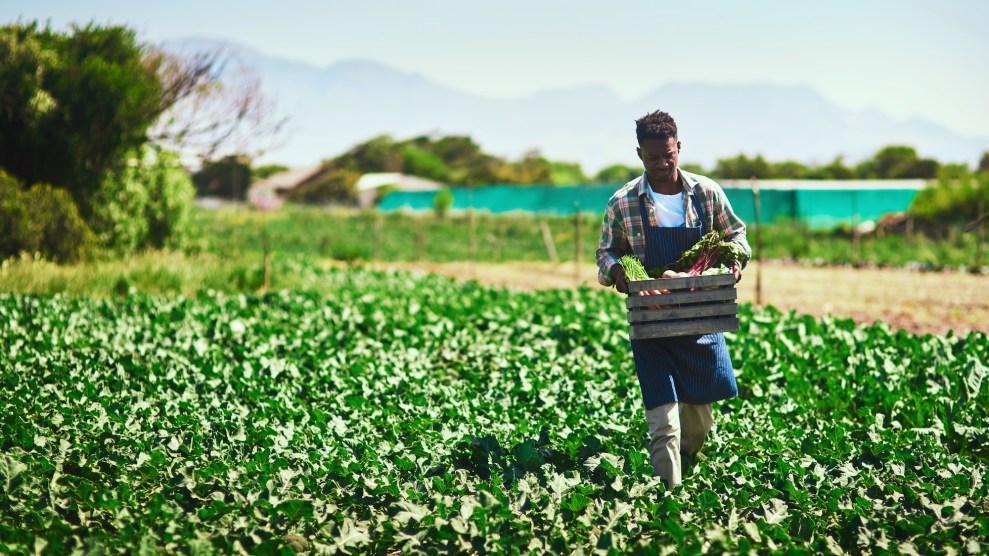 After the US Civil War, newly emancipated Black growers won a share of the agricultural landscape. They did so despite fierce backlash and the ultimately failed promises of Reconstruction. By the 1910s, around 200,000 Black farmers owned an estimated 20 million acres of land, mostly in the South. * That turned out to be a peak. Since then, due largely to lingering white supremacy and racist machinations within the US Department of Agriculture, the number of Black farmers has plunged by 98 percent. The remaining few managed to hold on to just 10 percent of that hard-won acreage.

A new Senate bill, called the Justice for Black Farmers Act, set to be released November 30, would mount a long-delayed federal effort to reverse the “destructive forces that were unleashed upon Black farmers over the past century—one of the dark corners of shame in American history,” lead sponsor Sen. Cory Booker (D-N.J.) told Mother Jones.

Co-sponsored with senators Elizabeth Warren (D-Mass.) and Kirsten Gillibrand (D-N.Y.), the bill would, among other things, create an Equitable Land Access Service within the USDA, including a fund that devotes $8 billion annually to buying farmland on the open market and granting it to new and existing Black farmers, with the goal of making 20,000 grants per year over nine years, with maximum allotments of 160 acres. It would also fund agriculture-focused historically Black colleges and universities as well and nonprofits to help identify land for the USDA to purchase, and “help new Black farmers get up and running, provide farmer training, and provide other assistance including support for development of farmer cooperatives,” the bill’s summary states.

If the land transfer sounds like a generous giveaway, consider that “we’ve done this before—we have seen massive land grants in US history,” Booker said. Indeed, the westward expansion of the United States was largely driven by land grabs followed by handouts. The 1850 Donation Land Claim Act delivered the Oregon territory to white US settlers in 320-acre chunks. The biggest of them all was the Homestead Act, signed into law by Abraham Lincoln in 1862, which ultimately delivered about 270 million acres—about 10 percent of the US land base—to smallholders.

The Justice for Black Farmers Act’s much more modest proposal would amount to an “equitable balancing of the scales after decades of systematic racism within the USDA that disadvantaged Black farmers, excluded them from loans and other programs, [and] prevented them from holding on to their land,” Booker said.

The 19th century’s great land transfers, which generated trillions of dollars in wealth for beneficiaries and their heirs, “effectively precluded African Americans from participating,” said Thomas Mitchell, a law professor at Texas A&M and 2020 MacArthur fellow, who participated in the bill’s drafting. Meanwhile, the near-complete wipeout of Black farmland ownership since the early 20th century—driven largely by racist federal and state policies—represents a transfer of wealth from Black to primarily white Americans “conservatively” worth $300 billion, Thomas added. That handover contributes to a persistent racial wealth gap—today, the median white family is 12 times wealthier than its Black counterpart.

In addition to the land-grant program, the bill would create a Farm Conservation Corps, which would focus on young adults from socially disadvantaged communities with USDA-funded apprenticeships on farms, with the goal of providing “academic, vocational and social skills necessary to pursue careers in farming and ranching.” While the program would be open to anyone from a disadvantaged background, Black trainees would be given priority for land grants from the Equitable Land Access Service.

The bill also attempts to purge the USDA of its ongoing legacy of racism. It would create an “independent civil rights oversight board to conduct reviews of any appeals of civil rights complaints filed against the USDA, to investigate reports of discrimination within USDA, and to provide oversight of Farm Service Agency County Committees,” and monitor the activities of the existing Office of the Assistant Secretary for Civil Rights. The bill would also remedy a long-time complaint of researchers: “USDA data is woefully inadequate if you’re trying to analyze and understand the status of Black farmers in America,” Texas A&M’s Mitchell said. The legislation would require the agency’s Economic Research Service to “conduct research on the status of minority agricultural producers, including their share of land and assistance, and farmworkers,” the summary states.

Getting it through Congress and onto President-elect Joe Biden’s desk will be an uphill task, but things can change fast. “I’m now some years in the Senate,” Booker said. “When I got here, a lot of folks indicated to me that issues of racial justice could not get done.” Since then, he said, conversations about criminal justice have changed dramatically, leading to the First Step Act, which passed in 2018 with bipartisan support, addressing stark racial differences in sentencing over cocaine charges and other issues. Leah Penniman, a New York–based farmer, educator, and advocate for Black agrarianism, called the bill an “opportunity to reverse and correct the millions of acres of land loss within the Black farming community and fortify the next generation of Black farmers with the foundation they need for successful careers in agriculture.” She added, “I never dared to imagine that such an elegant, fair, and courageous piece of legislation as the Justice for Black Farmers Act could be introduced.”

With recent protests against police killings of George Floyd and Breonna Taylor, “I think there is growing momentum for addressing the legacies of overt discrimination in our country,” Booker said. And a strong push for the Justice for Black Farmers Act, while it won’t likely pass through the current Congress, could succeed in embedding its key provisions in the next farm bill, the twice-a-decade omnibus food and farm policy legislation that’s set for renewal in 2023.

Lawrence Lucas, president emeritus of the USDA Coalition of Minority Employees, called the bill a “a quantum leap for justice” that confronts the “racism embedded in the USDA since its founding, and that has been allowed to control the destiny of black farmers’ lives.” Lucas blew the whistle on internal USDA racism in a 2008 US House hearing. He has a hand in shaping the Booker-Warren bill; it grew from a letter he and a group of Black farmers and advocates sent to Sen. Warren during her presidential campaign in 2019, urging her to directly take on the USDA’s racism and issues of Black farmland loss.

I asked Lucas if he thought it had a chance of passing. “In my estimation, yes,” he said. “Decent Americans and decent congressional representatives will look at this bill, understand the history, understand its intent to address generations of abuse of a group of people, just as they did with the Civil Rights Act of 1964.” He added: “This is the Black Farmers Civil Rights Act of 2020, and it’s long overdue.”

Correction: This article originally misstated the peak number of acres that Black farmer owned in the early 20th century, based on a 1930 US Census report. Furthermore, a group called the Land Loss and Reparations Project—a team consisting of Texas A&M’s Thomas Mitchell, University of Massachusetts, Boston, economist Dania V. Francis, the New School’s Darrick Hamilton, Harvard’s Nathan Rosenberg, and journalist Bryce Stucki—argues that the USDA undercounted Black-owned farmland in that study, so this article has been corrected to reflect their estimate.