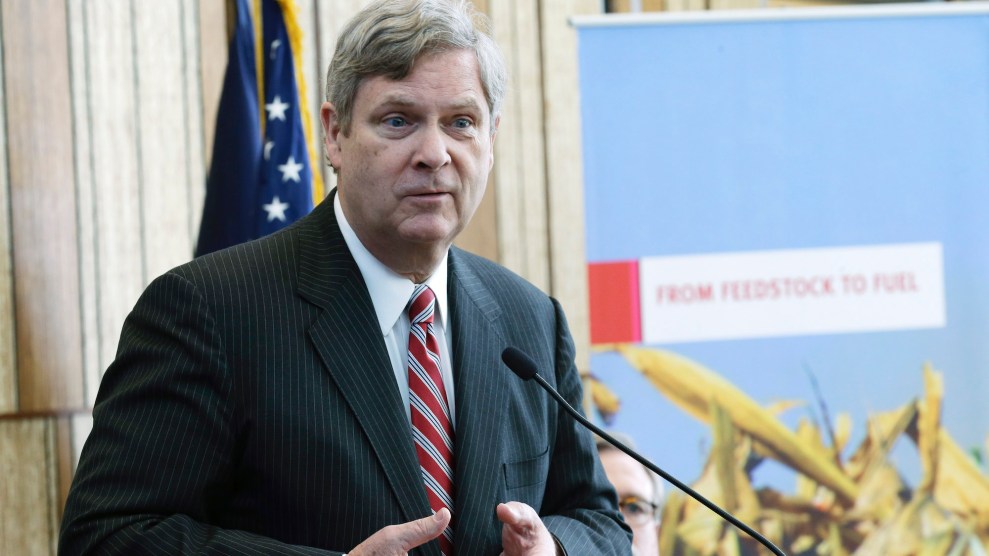 For much of his latest presidential bid, Joe Biden ran as a restorationist: a figure who would vanquish the malign chaos of Trumpism and deliver the placid, rational policymaking of the “no-drama Obama” era. Then came the coronavirus pandemic and associated economic crisis, whose onset coincided with the takeoff of Biden’s then-floundering candidacy. Biden switched gears, vowing not to revive pre-Trump normalcy but rather to serve as a transformational president in the mold of Franklin D. Roosevelt.

But to lead the US Department of Agriculture, President-elect Biden has reverted to pre-pandemic form, dipping into the roster of the Obama-Biden cabinet and plucking out Tom Vilsack, who led the department during the entire eight-year reign. Immediately after leaving the USDA, Vilsack jumped into a job in an industry his agency had regulated: Big Dairy, for which he has served ever since as a marketing executive, drawing an annual salary of nearly $1 million to direct the US Dairy Export Council. While progressive food and agriculture groups decried the pick, in many ways it was predictable. Vilsack, a former Iowa governor, has been Biden’s rural/agriculture consigliere since the start of his campaign. Despite the transformative vows, the campaign maintained a corporate-aligned stance toward ag policy even through the Democratic National Convention in August.

Obama promised “hope and change,” but at the USDA, he largely delivered centrist, corporate-friendly policies.

Whether Vilsack’s counsel served Biden well is another question. Former Democratic presidential rivals Sen. Elizabeth Warren (D-Mass.) and Sen. Bernie Sanders (Independent-Vt.) ran on a message of progressive rural populism, and together beat Biden by a margin of nearly three to one in the Iowa caucuses in 2020. In the general election, Trump defeated him there by eight percentage points.

Biden chose Vilsack despite fierce calls from supporters demanding new directions for the department that executes federal food, hunger, farm, and forest policy. Democratic Majority Whip Jim Clyburn (D-S.C.), whose endorsement in early 2020 helped propel Biden to the Democratic nomination, put forward Rep. Marcia Fudge (D-Ohio), an expert on hunger policy and veteran of the House Agriculture Committee. Fudge openly campaigned for the job, telling Politico in November that she deserved to be considered for a cabinet role beyond those often reserved for Black people: “You know, it’s always ‘we want to put the Black person in labor or HUD.'” In the end, Biden did just that, tapping Fudge to run the Department of Housing and Urban Development (HUD).

Now that Biden has restored the USDA to its Obama-era leadership, it makes sense to look at the legacy of Vilsack’s eight years at the helm of the department. Like Biden now, Obama came to power in the wake of a deeply unpopular Republican president. He promised “hope and change,” but at the USDA, he largely delivered centrist, corporate-friendly policies, with Vilsack leading the way. Here are some lowlights.

• The Obama USDA partially set the stage for meatpacking workers’ plight during the coronavirus pandemic. Back in 2012, the department floated a plan to partially privatize its inspection of the chicken industry’s slaughterhouses. With fewer pesky USDA inspectors on the kill line, the thinking went, those lines could speed up, from an already rapid 140 birds-per-minute to a mind-boggling 175 birds-per-minute, a 25 percent bump. Vilsack hotly promoted the move, declaring before a House subcommittee that the plan “will allow the poultry industry to continue to be profitable, and allow us [the USDA] to save some money as well.” Indeed, the department boasted the speedup would save $256.6 million in costs—a windfall that would have accrued mainly to four large companies, Tyson, Pilgrim’s Pride (now mostly owned by JBS), Perdue, and Sanderson, who together slaughter nearly 60 percent of the chicken consumed in the United States.

But faster line speeds also mean more risk of injury to workers, especially repetitive-stress ailments like carpal tunnel, which were already rampant in the industry. Worker-safety advocates howled in protest at the proposed speedup, and the USDA ultimately listened. In 2014, the department went ahead with the semi-privatization scheme but kept line speeds at 140 birds per minute. But the move meant that future USDA leaders could allow faster line speeds—and the Trump administration’s ag department took full advantage. A September investigation by the Food and Environment Reporting Network’s Leah Douglas found that at least 40 percent of chicken plants operating at the higher speeds experienced COVID outbreaks, vs. 14 percent for the overall meat sector.

Vilsack’s actions in 2014 “undoubtedly opened the door for the moves by the USDA in recent years to further increase processing line speeds, ignoring evidence of the horrific impact it has on workers,” said Alexandre Galimberti, senior advocacy and collaborations advisor for the anti-poverty non-profit Oxfam USA, which issued a scathing report on the industry’s working conditions in 2015.

• The Vilsack USDA also helped facilitate the ongoing pesticide drift crisis in the Midwest and South. The ag department’s portfolio also includes vetting novel genetically altered crops before they hit farm fields. By the time Vilsack took over in 2009, crops engineered by Monsanto to withstand the company’s own herbicide, glyphosate, already dominated the US corn, soybean, and cotton crops; and weeds had already evolved to resist glyphosate, causing farmers to use ever-higher doses of the toxic chemical and revert to older, even more toxic ones.

As resistant weeds galloped through farm country, the USDA kept approving new glyphosate-tolerant crops, including alfalfa (fodder for cattle) and turf grass, expanding the problem’s range. In 2015, the department faced a decision over the seed/pesticide industry’s solution to the crisis: crops that can withstand glyphosate plus an herbicide called dicamba. That year, the USDA greenlighted Monsanto’s dicamba-tolerant soybeans and cotton—despite clear evidence that dicamba is a volatile chemical prone to drifting during warm summer months, precisely when farmers would be applying it to resistant crops. To make the system work, Obama’s Environmental Protection Agency had to approve special, supposedly low-volatility dicamba formulations—which it did in 2016 without any independent testing of its volatility.

The result has been a full-on disaster. As Monsanto’s seeds have conquered soybean and cotton fields from Nebraska to Georgia, wayward dicamba has strayed from targeted fields and damaged millions of acres of crops, trees, and home gardens. The Trump administration’s response has been to defend the industry, even defying a court-ordered ban on the products. Meanwhile, a team of National Cancer Institute scientists found that exposure to dicamba heightens the risk of liver cancer. University of Missouri researchers have found it in rainwater at high levels near sprayed fields, and in the air for 72 hours after application. The Biden-Harris administration, including the latest version of the Vilsack USDA, will have to deal with this festering scandal with roots in decisions made by the previous Democratic administration.

• Despite chirpy rhetoric, the Vilsack USDA had a dodgy record on race. “When I assumed the office of the Secretary nearly eight years ago, USDA had a reputation marred by decades of systemic discrimination,” Vilsack wrote in a 2016 Medium post. “Over the past eight years, we’ve taken big, bold steps to rectify past wrongs and ensure all Americans who come to USDA for help are treated fairly, with dignity and respect.” In a 2019 investigation for The Counter, journalist Bryce Stucki and Harvard Law School scholar Nathan Rosenberg shredded that self-congratulatory view. In fact, they found, Black farmers faced the same challenges under Obama that they did under [George W.] Bush.” They concluded:

Under Vilsack, USDA employees foreclosed on black farmers with outstanding discrimination complaints, many of which were never resolved. At the same time, USDA staff threw out new complaints and misrepresented their frequency, while continuing to discriminate against farmers. The department sent a lower share of loan dollars to black farmers than it had under President Bush, then used census data in misleading ways to burnish its record on civil rights.

Vilsack’s reemergence as Biden’s USDA pick “enraged many farmers of color who say his record on civil rights should have disqualified him from the job,” Politico reported late Wednesday.

So by handing the agency’s reins back to Vilsack, Biden is hardly restoring the department to some glorious age. The US Farm Bureau Federation, an insurance conglomerate and major agribusiness lobbying and campaign-finance outfit, hailed the pick. “Tom and I built a good relationship during his first term as Ag Secretary and we’ve built on that relationship in his current role with the US Dairy Export Council,” declared the group’s president, Zippy Duval, in a statement. Like I do, Duval seems to assume Vilsack will maintain agribusiness as usual during his next stint at the USDA.