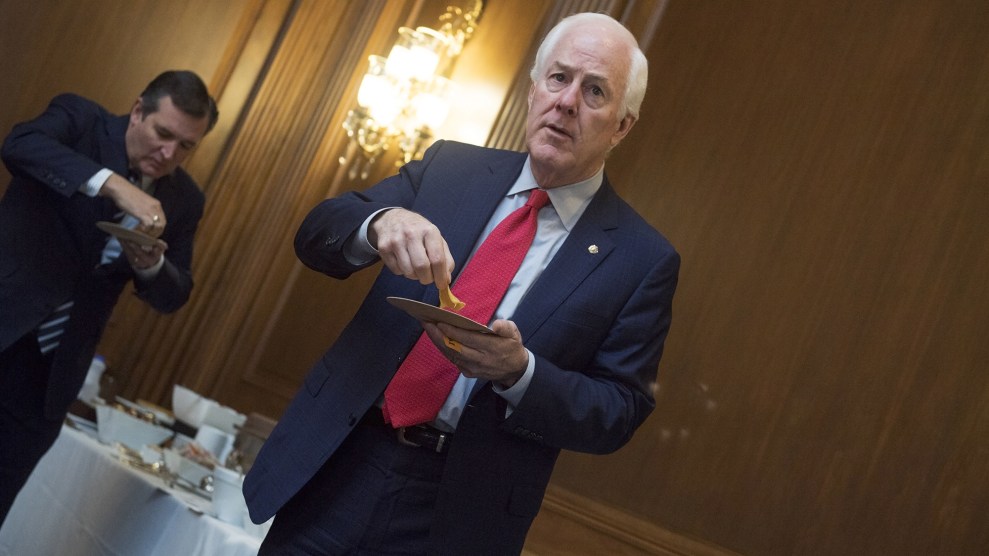 On Christmas Eve, Sen. John Cornyn (R-Texas) posted a picture of some awful-looking meat slathered with an ambiguous, thick red sauce that looked as if it had congealed before being scraped off some leftover spaghetti. Apparently, this was a Cornyn “brisket family tradition.” How the Cornyns arrived at this tradition is unclear and especially baffling given that he represents a state that is the undisputed barbecue capital of the country, and that he lives in Austin, arguably the barbecue capital of the barbecue state. Repulsed people on Twitter wondered the same thing, roasting the senator for his lurid Christmas Eve “traditional” family meal.

y’all wrong for dishonoring that cow’s memory like this. https://t.co/HVvwBAoguh

"Fourteen beef jerky sticks, my good man. WITH the Ragu."

This is not an isolated incident, however. The brisket episode fits into a larger, inexplicable pattern of conservatives posting gross food that they, presumably, are both proud of and about to eat. In July of 2019, former Wisconsin Governor Scott Walker tweeted out “Veggie pizza on the lake! Mmmmmm!” above an image of the loosest possible definition of pizza: uncooked cheese, raw broccoli, and tomatoes on top of what looked like an oversized graham cracker, or perhaps an undercooked pie shell smothered with ranch dressing.

Once I started noticing the nauseating conservative gastronomy, it seemed as if it was everywhere. Ben Shapiro’s “conservative influencer” sister, Abigail, has posted some lackluster millennial dishes, including her take on “ramen” with what appeared to be frozen boneless chicken wings, messily cut soft boiled eggs, and no visible noodles. (To be clear, I’d eat but not post this “I’ve-recently-had-too-much-alcohol-and-am-out-of-groceries” meal.) The permanently angry British Infowars correspondent Paul Joseph Watson routinely posts thoroughly depressing looking meals of boiled vegetables, unseasoned fish, and beans smothered in grated cheese, which he elevates by claiming it’s a menu to “own the libs.” I’m not going to challenge him on that point, but going through the work to make entire meals for shitposts makes me wonder who the joke is actually on. But maybe this is just because Watson is a certain kind of British man, and they are famous for routinely shoveling the world’s most execrable cuisine into their mouths.

In trying to understand what motivates conservatives to eat like this, I decided to go straight to the source. I emailed Cornyn’s press secretary and communications director, asking for some comment that would put their boss’s brisket presentation in context. Neither responded.

Undeterred, I turned to a former Republican political strategist, who’s still in the game as a PR consultant. They agreed to talk to me anonymously because there’s apparently very little professional upside in talking about the bad eating habits of your potential clients.

“Democrats manage their social profiles much more carefully, whereas conservative principals are more likely to post without running it through a comms team.”

The source guessed that the food tweets might illustrate the differences between the way Democrat and Republican communications teams operate. “Democrats manage their social profiles much more carefully,” they noted, “whereas conservative principals are more likely to post without running it through a comms team.” Democrats aren’t totally exempt from being responsible for bad food posts. Sen. Mark Warner (D-Va.) made a video of himself in April concocting a tuna melt that was wildly reviled online for the aggressive amounts of mayonnaise that he put in it. Still, I tried to find comparable efforts by Democrats and came up short. By and large, there haven’t been as many kitchen mishaps by liberals.

The social media analysis may be a generalization, but it’s not necessarily wrong. (There is no equivalent to Chuck Grassley’s Twitter.) “I also think conservatives have this feeling of being constantly demonized by the media, so you are seeing them trying to show their humanity,” they speculated.

This makes perfect sense, but chances are they also actually like this stuff. Maybe swaths of conservatives are the Britons of America, largely subsisting on and enjoying bland, ineptly cooked meals. Rural and suburban areas, which skew conservative, have a near-monopoly on places like Chile’s and Ruby Tuesdays, which serve solid, perfectly mediocre food. I suspect the cooking goes the same way. There’s a diversity of cuisines everywhere, but the potlucks of conservative suburbs I lived in growing up in the midwest and Texas are the only places in my life I’ve ever come across greenbean casseroles and other mushy, visually unappealing dishes.

I’m cautious about generalizing about what most Republicans are eating, but because Duncan Hunter was so corrupt there’s a long list of things he wrongfully spent money on with campaign funds. Thus, we have a rare window into how another Republican eats: nearly exclusively at high-end American chain restaurants, which is to say, expensive versions of Chili’s. Hunter probably wasn’t an aberration. Without getting into the details that could cause problems in my professional life, I know other conservatives who eat like this. Money isn’t a concern, but they almost always gravitate to steakhouses and pricey seafood chain restaurants.

These kinds of restaurants are a far cry from fake veggie pizzas, but they might shed light on what’s happening inside some people’s heads when they choose food. The choices are safe and familiar to the people who are advertising them. Scott Walker hasn’t eaten over 19,000 ham sandwiches because he’s an adventurous or curious person. That’s the lunch of a man who has absolutely no interest in changing anything at all.

I’ve spent the last week since Cornyn’s brisket searching Google Scholar for permutations of “politics, food bad” “conservatives, bad cooking”—but I haven’t found much. The closest analogy seems to be with McMansions. It’s hard to pinpoint the political demographics of McMansion owners, but 2014 research by the Political Polarization in the American Public shows a strong correlation between large homes that are built far apart—key features of McMansions—and conservatism. Betsy Devos’s wild-looking summer home is one of the highest-profile examples of this, and who can forget former Arkansas Gov. Mike Huckabee’s famous beachfront property.

These houses generally aren’t cheap. If you can afford them, you can probably afford structures that aren’t architectural Frankensteins. But people who decide to live in them are communicating something about what they want people to think their values are: solid, prosperous, and aggressively not elitist like some liberal enclave in Southhampton. A million-dollar house though is still a million-dollar house, regardless of where it is, or what it looks like. While Cornyn might be eating dry tomato paste brisket with his family on Christmas Eve, once back in Washington, he still enjoys places like the Capital Grille, where entrees go for $50.