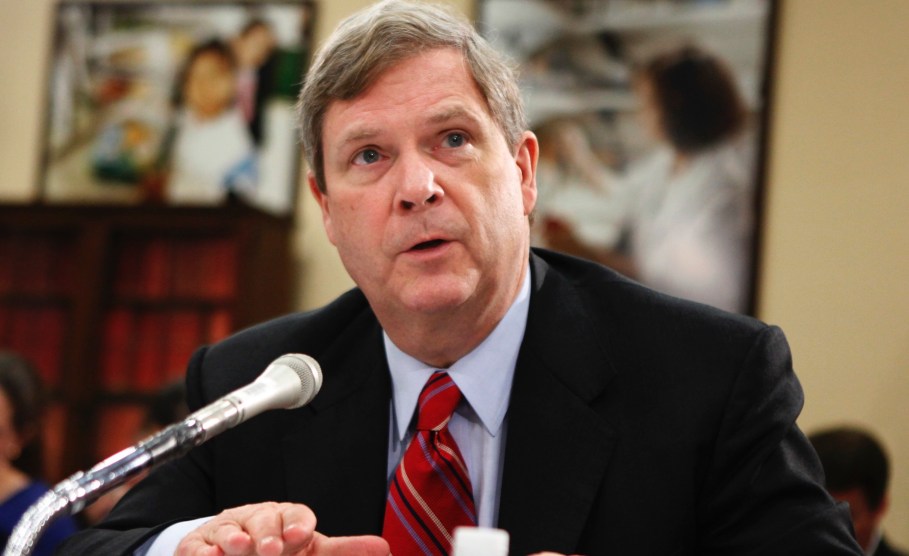 Second time's a charm? Agriculture Secretary Tom Vilsack testifies before the US House during his first stint at USDA, in 2009. AP Photo/Manuel Balce Ceneta

After a 92-7 vote in the US Senate, it’s official: A dairy industry executive will serve as agriculture secretary under President Biden. Tom Vilsack, who also held the post during the entire Obama presidency, returns to the US Department of Agriculture after a four-year stint as president and CEO of the Dairy Export Council, an industry trade group.

Sen. Bernie Sanders (I-Vt.) was the only non-Republican to vote against Vilsack. “I like Tom and I’ve known him for years. I think we need somebody a little bit more vigorous in terms of protecting family farms and taking on corporate agriculture,” Sanders told reporters after the vote, the Hill reports. “I think he’ll be fine, but not as strong as I would like.” He added in a statement:

I opposed his confirmation today because at a time when corporate consolidation of agriculture is rampant and family farms are being decimated, we need a secretary who is prepared to vigorously take on corporate power in the industry.

During the last Democratic presidential primary, Vilsack—then a Biden campaign adviser—warned Democratic candidates not to criticize the big agribusiness companies that dominate US agriculture, arguing such a position would not be a “winning message.” Biden took that advice to heart in the run-up to the Iowa caucus—and got trounced by then-presidential hopefuls Sen. Elizabeth Warren (D-Mass.) and Sanders, who ran on platforms calling to bust up the agribusiness oligopolies. In the general election, with Vilsack as Biden’s top rural adviser, Trump won the state by eight percentage points.

As I noted in this recent piece, a deference to agribusiness interests marked Vilsack’s previous run at the USDA. Under him, the agency greenlighted troublesome herbicide-tolerant crops cooked up by the seed/pesticide industry, and pushed the meat industry’s agenda to roll back federal slaughterhouse inspection, ultimately subjecting workers to faster kill lines, at their peril. He also failed to reverse the USDA’s long history of discriminating against Black farmers, despite rosy rhetoric to the contrary.

Vilsack has vowed to take a fresh approach, particularly with respect to Black farmers. “It’s a fundamentally different time,” he said at his Feb. 2 confirmation hearing before the Senate Agriculture Committee. “I am a different person. And it is a different department.”

Meanwhile, agribusiness interests remain hopeful for more of the same. “His strong track record of leadership and previous experience at USDA will serve rural America well,” Zippy Duvall, president of the American Farm Bureau Federation, an insurance conglomerate and agribusiness lobbying outfit, said in a statement hailing his confirmation.