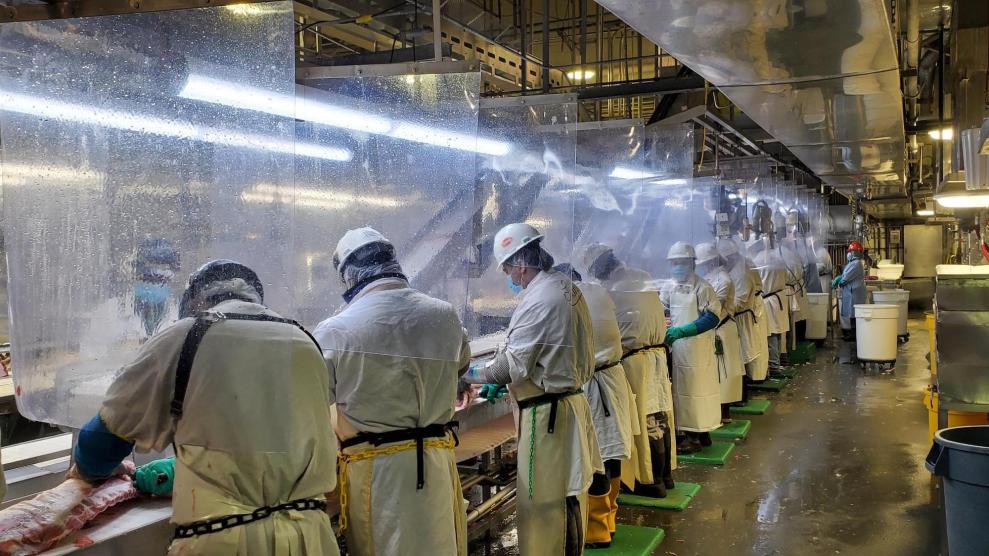 So far during the coronavirus pandemic, 284 meatpacking workers have died from the virus, and 57,453 have tested positive. As COVID-19 slammed slaughterhouses, they emerged as primary vectors for spreading the virus into surrounding communities. Yet the corporations that dominate the industry have been allowed to continue operating at full capacity without heightened worker-safety regulation, and have received just two fines from the Department of Labor’s Occupational Safety and Health Administration, totalling just $29,109. That’s slightly more the annual pay of a single worker making the industry–average wage of around $13.50.

It’s tempting to hang this staggering impunity on the Trump Administration’s zeal for corporate-friendly deregulation and open disdain for the industry’s largely immigrant workforce. But that doesn’t tell the full story. The Obama administration pushed hard to ramp down federal inspection of slaughterhouses, ultimately giving rise to conditions that imperil meatpacking workers. And for decades, the meatpacking labor force has endured high injury rates—especially repetitive-motion ones like carpal tunnel—with little intervention from OSHA. Those conditions will persist after the pandemic unless Biden’s USDA and Department of Labor intervene decisively.

What gives—why do food-related industries like meatpacking enjoy such carte blanche under Democrats and Republicans alike? A new report from the non-profit advocacy group Feed the Truth gets at the answer. Using data from the money-in-politics watchdog Maplight, the report shows how the companies that loom over our food system reserve a portion of their massive profits to invest in lobbying and campaign donations, and in doing so secure a friendly regulatory playing field. The report spotlights just one of the many ways Big Food shovels money into Washington: through the bigfoot trade groups they fund.

Key findings: since 2007, the 20 biggest food-industry trade groups have delivered $33.7 million to Congressional and federal candidates and more than $300 million towards lobbying the federal government. And they tend to lean on lobbyists with strong ties to the precise federal agencies and politicians they’re currying favor with. The report found that 80 percent of the flacks employed by the top three trade groups—the Consumer Brands Association, American Beverage Association, and the  the National Restaurant Association—count as “revolvers,” or people who have swished through the revolving door and “now lobby the officials and agencies they once worked for.”

The meat industry looms large in the trade-industry game. No fewer than five of its DC outfits crack the top 20 biggest trade groups: the National Pork Producers Council, the American Meat Institute, the National Cattleman’s Beef Association, the Livestock Marketing Association, and the US Poultry & Egg Association. Together, they’ve spent more than $26 million on lobbying and $8.5 million on campaign donations.

And they, too, play the revolving-door game. In 2019, 12 of the 19 lobbyists representing the National Pork Producers Council previously worked for the federal government or Congress. One of them, Anne McMillan of the DC powerhouse political-influence outfit Invariant, boasts prized connections in today’s Washington. In 2009-10, she worked as a senior policy adviser to House Speaker Nancy Pelosi (D–Ca.). From 2010 to 2014, she worked as deputy chief of staff to Tom Vilsack—then the USDA chief for Barack Obama, now serving the same role for President Joe Biden.

Meatpacking companies also throw their financial girth around by directly hiring lobbyists. Tyson—which processes a large share of US beef, chicken and pork—spent nearly $1.3 million million on lobbying in 2020, as the coronavirus ravaged workers in its plants. (It was in a Tyson pork slaughterhouse in Iowa where the company had to fire managers who had been publicly accused of betting on which employees would fall ill with COVID-19.)

And it’s not just Big Meat. The seed-pesticide industry, dominated by just four companies, has also spent big. The industry’s main advocate on the Hill, Croplife America, lands at number five on Feed the Truth list of biggest trade groups, doling out $29.6 million on lobbying since 2007, and another $1.1 million on campaign giving. Five of its ten lobbyists had previous government ties in 2019.

McMillan, whose 2019 client list included Bayer, a company at the center of an herbicide scandal now engulfing farm country in the South and Midwest. The herbicide, a tweaked version of an old chemical called dicamba, was released by Monsanto in 2016 (Bayer closed its deal to buy Monsanto in 2017). Dicamba has a strong tendency to waft off targeted fields and damage other crops and plants, thus essentially forcing farmers with neighbors using dicamba to buy dicamba–resistant crop varieties. The Trump administration studiously looked the other way as a new annual rite of mass herbicide drift emerged, declining to crack down on the products. But it was under the Obama Administration that both the offending seeds and the wayward herbicide passed regulatory muster and entered farm fields, despite warnings from independent scientists of trouble ahead.

So it’s clear that the demise of the Trump administration won’t mean the end of Big Food’s sway over federal policy. Current USDA chief Vilsack embodies the revolving door phenomenon. In 2017, after serving leading the USDA for eight years under Obama, Vilsack quickly resurfaced as CEO of  US Dairy Export Council, whose members include Starbucks, Land O’Lakes, and the American Farm Bureau Federation, a massive insurance conglomerate and agribusiness trade group (landing fourth on Feed the Truth list). In 2020, Vilsack reported  $833,000 in salary from the group.

Vilsack retains at least one tie to the US Dairy Export Council. Its new CEO is Krystra Harden, who served for seven years under Vilsack in top jobs in the Obama USDA, and was also his top deputy at the dairy job. Between her stints at USDA and with Big Dairy, Harden was the chief sustainability officer and head of external affairs for Corteva, the seed-pesticide arm of the recently merged Dow and DuPont.

The Feed the Truth report offers a couple of commonsense fixes that would reduce Big Food’s role in shaping policy: essentially, halt the practice of placing industry flacks in roles that shape food and agriculture policy, and ban Congress members from taking campaign donations from the industries they oversee. It’s “no accident,” the report states, that the House and Senate agriculture committees, which hold tremendous sway over US food and farm policy, are magnets for cash from the 20 largest food industry trade organizations. “The millions in campaign contributions represent an avenue for influence and access that’s not available to the average person; the concerns of everyday consumers, workers and small business owners take a back seat to the special interests of giant food corporations,” the report states.