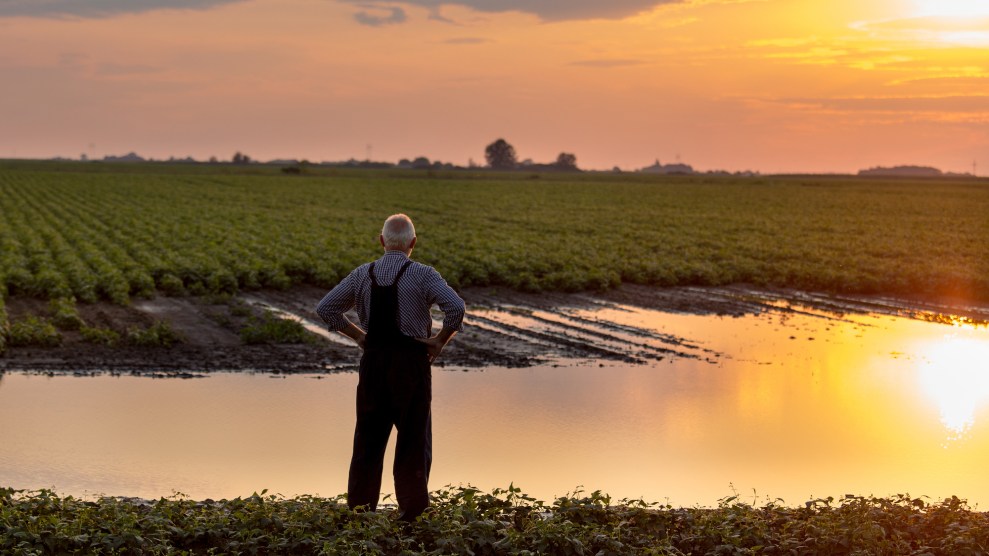 This is your food system on climate change. Jevtic/iStock/Getty Plus

An ambitious climate bill lurks within the sprawling $2.3 trillion American Jobs Plan released by the Biden administration Wednesday. With its focus on jobs, green energy, mass transit, and a transition from fossil fuel-guzzling cars to electric ones, “it’s the closest we’ve come to a realization of the Green New Deal, an ambitious collection of progressive proposals to combat climate change, racial injustice, and gender inequality,” note my Mother Jones colleagues Kara Voght and Rebecca Leber. And given the highly divided, barely Democratic-controlled Congress, it’s also the closest we’re likely to see anytime soon.

But what about agriculture? There’s no slowing climate change or protecting us from its worst insults without reforming the way we farm. Agriculture generates 10 percent of US greenhouse gas emissions; and our most important growing regions, from the fruit and vegetable fields of California to the Midwestern corn belt to the citrus groves of South Texas and Florida, are increasingly vulnerable to climate-related shocks like polar vortex-driven freezes, droughts, storms, and wildfires.

The original Green New Deal resolution, released in 2019 by Rep. Alexandria Ocasio-Cortez (D-N.Y.) and Sen. Ed Markey (D-Mass.), proposed a “10-year national mobilization” to “eliminate pollution and greenhouse gas emissions from the agricultural sector” by “supporting family farming,” “investing in sustainable farming and land use practices that increase soil health,” and “building a more sustainable food system that ensures universal access to healthy food.” During the presidential campaign, the Biden-Harris climate platform called for “decarbonizing the food and agriculture sector, and leveraging agriculture to remove carbon dioxide from the air and store it in the ground.”

Yet the 27-page fact sheet on Biden’s American Jobs Plan says very little about agriculture, mentioning it just twice in passing. The most substantial discussion of the topic appears in the context of a proposal to devote $5 billion over eight years to “partner with rural and Tribal communities to create jobs and economic growth in rural America,” one goal of which is to “position the US agricultural sector to lead the shift to net-zero emissions while providing new economic opportunities for farmers.”

In a bill that proposes to spend $2.3 trillion over eight years, $5 billion amounts to just 0.25 percent of the total. To put the proposed expenditure into context, consider that in 2020, farmers received $46 billion in total federal aid, an outlay that went almost exclusively to massive operations that perpetuate the status quo.

Ferd Hoefner, founding policy director of the National Sustainable Agriculture Coalition, said the near-absence of agriculture in this early draft of the plan is “bad news,” because the window for ambitious, big-spending climate legislation is tight. Right now, the Democrats hold slim House and Senate majorities that could evaporate in the 2022 midterms. Biden and his Congressional allies have already passed a $1.9 billion COVID-relief bill; in a couple of weeks, they plan to roll out another trillion-dollar-plus bill to fund healthcare, child care, and education. Given the reality of the Senate filibuster and the resulting power of deficit- and tax-adverse centrists like Sen. Joe Manchin (D.-W.V.), there likely won’t be many more chances to fund an agriculture transformation during the current Congress.

Hoefner added, however, that the two mentions of agriculture in the fact sheet could serve as “placeholders” for the bill as it moves through Congress, “and maybe that means there’s more coming.” He said parts of more ambitious ag-climate proposals bouncing around Congress could yet make their way into the American Jobs Plan. Two, in particular:

Back in 2019, Sen. Cory Booker (D.-N.J.) introduced the Climate Stewardship Act, which would devote more than $11 billion annually to programs that compensate farmers for climate-friendly practices like cover crops and more diverse crop rotation. It would also double federal funding for agricultural research, which Hoefner calls “absolutely essential” for helping our food system adapt to climate change. Booker, who in 2021 joined the Senate agriculture committee, has expressed plans to re-introduce the bill in this session. A source familiar with Booker’s thinking said the senator plans to try to get “as much of the Climate Stewardship Act as possible” into the infrastructure bill during Senate negotiations.

Rep. Chellie Pingree (D.-Maine), introduced a similar bill in 2020 called the Agriculture Resilience Act. On Wednesday, Pingree released a statement supporting the American Jobs Plan, calling it a “once-in-a-generation opportunity to modernize the way we move, live, care for our most vulnerable, and manufacture in this country.” But she also plans to reintroduce the Agriculture Resilience Act sometime in the next few weeks, her spokesperson, Victoria Bonney, wrote in an email. She added: “The Congresswoman looks forward to reviewing the specifics of the President’s proposal and working with her colleagues in Congress to elevate farmers as an integral part of the climate solution.”

It’s not unusual for pieces of smaller legislation to end up in big bills like the American Jobs Act. Just a few weeks ago, the $1.9 trillion COVID-relief package picked up an idea originally posited in Sen. Booker’s never-passed Justice for Black Farmers Act from 2020: $5 billion debt relief for struggling farmers of color. Something similar could happen with agriculture in Biden’s current mega-bill.

But right now, Hoefner said, “the train is leaving the station, and agriculture’s not in it.”