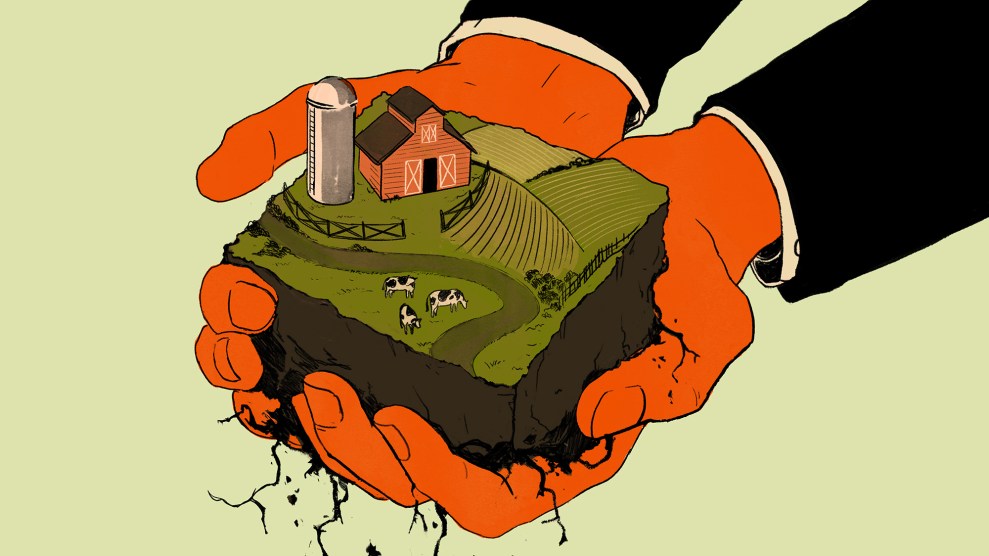 Bill Gates, in his journey from software oligarch to philanthropist, has managed to hang on to a personal fortune worth $127 billion, making him the globe’s second-wealthiest person. As his wife Melinda French Gates’ divorce from him proceeds, it will be fascinating to see what becomes of the couple’s massive holdings of farmland. Together, the Gateses are the United States’ “largest private farmland owners,” the trade journal Land Report recently revealed. They preside over 242,000 acres nationwide, an empire of dirt worth a cool $5 billion—meaning, even one of them leaves the divorce with nothing more than the farms, that person will comfortably retain billionaire status.

Bill Gates wrote that his “investment group chose” to buy massive tracts of farmland; “It is not connected to climate.”

The Gateses aren’t the only one-percenters with dirt in their portfolios. Over the last decade, farmland has taken off as an “asset class,” finance speak for a type of investment that Wall Street salespeople urge wealthy people to include in their well-balanced portfolios. The basic pitch: “Buy land—they aren’t making it anymore,” as the old investment saying goes.

As global population rises—and demand for land-intensive foods like meat rises even faster—the world’s cache of arable land is shrinking under pressure from sprawl, pollution, and desertification. Between 1940 and 2015, the average price of an acre of farmland increased sixfold and economists expect that trendline to steepen. As a result, financial giants Prudential, Hancock, TIAA, and UBS have all acquired substantial US farmland holdings.

So far, banks, insurance companies, and pension funds, along with individuals like Gates, own just a tiny fraction of the $2.5 trillion US farmland universe. But that could soon change, especially considering that seniors own more than 40 percent of farmland, suggesting an “impending transfer,” as the American Farmland Trust, an agriculture conservation nonprofit, noted in a recent report.

What’s happening on all this newly purchased land? It’s not like Bill and Melinda are donning overalls and mounting tractors (though together, they do own a 10 percent stake in farm-equipment behemoth John Deere); investors like the Gateses leave the farming to professionals. A spokesman for Cascade Investments, the entity that manages the Gateses’ personal fortune, declined to comment on how the couple’s farm operations are run—except to assert their devotion to sustainable agriculture.

But asset appreciation, not the public good, is the underlying goal. In March, Bill Gates appeared in a Reddit “Ask Me Anything” to promote his recently published book, How to Avoid a Climate Disaster. Asked by a participant why he had bought so much farmland, Gates responded: “My investment group chose to do this. It is not connected to climate.” In other words, wealthy investors covet farmland for the money-making possibilities, first and foremost.

Meanwhile, the next generation of would-be farmers faces an uncertain future. Nearly a century of price appreciation means that “acquiring land has become increasingly difficult,” especially for the “diverse new generation of farmers and ranchers who want to enter the field,” American Farmland Trust warns.

People who want to “grow for their communities” are being priced out.

Across the country, aspiring farmers are increasingly being outbid on land deals as investment funds swarm, says Holly Rippon-Butler, the land campaign director for the National Young Farmers Coalition. People who want to “grow for their communities” are being priced out, Rippon-Butler says, in favor of farm managers who answer to distant investors seeking profit above all. Rippon-Butler authored a 2020 report detailing the obstacles to secure land tenure facing young people who want to grow food for a living.

This system doesn’t just cripple a new generation of farmers; it hurts their rural neighbors and the economies of local towns. Absentee landlords are “not going to the local hardware store and buying products there,” says Loka Ashwood, a rural sociologist at the University of Kentucky. “They’re not using a local seed dealer, they’re not using a local equipment dealer, their kids aren’t going to the local schools.”

Rural dwellers iced out of the land rush are often left alienated and angry. “The validity of the US government—the validity of the democratic state—is closely tied to access to land and long has been in rural America,” Ashwood says. “I see this as deeply related to the increased skepticism towards the government.”

In the not-so-distant past, prominent politicians were attuned to the threat of an investor-class takeover of the land that feeds us, notes Madeleine Fairbairn, author of Fields of Gold: Financing the Global Land Rush. Back in 1977, during a surge in land prices, Wall Street titan Merrill Lynch and the now-defunct Continental Illinois Bank and Trust announced plans to launch Ag-Land Trust, a mutual fund to allow big investors to grab hold of farmland.

The US House Agriculture Committee called a hearing to decry the development. “Should land investment trusts become more common, the land would be concentrated into fewer and fewer hands and management decisions would be made by an ever-dwindling number of people,” Chuck Grassley, then a young Republican representative from Iowa, complained. The trend, he concluded, “would be disastrous for the small, independent farmers, and in the end, for the consumer.”

Chastened, Merrill Lynch and its partner shuttered Ag-Land Trust before it got started. Someone should alert Grassley, now a powerful member of the Senate Agriculture Committee, that the land investment trusts are back with a vengeance.