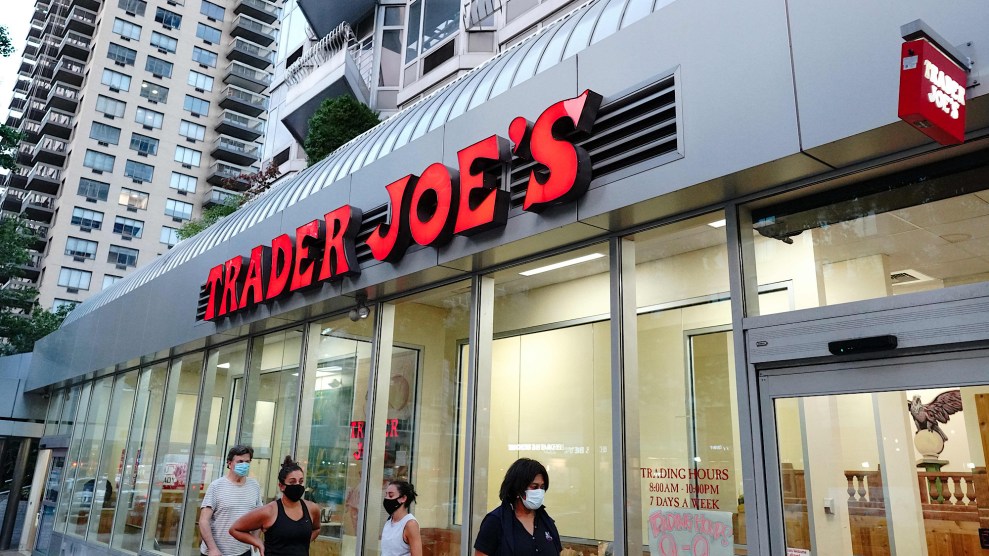 After the Centers for Disease Control and Prevention’s announcement last week that fully vaccinated people do not have to wear masks in most situations, retailers like CVS and Costco said they were lifting mask mandates in stores. The news came as a shock to some workers.

I spoke with three workers at Trader Joe’s across the country, which lifted its mask mandate on Friday. (They asked to remain anonymous for fear of retaliation from their bosses.) The workers said the news came without any notice. “I honestly felt pretty uncomfortable,” said a worker in Missouri who was informed early in her shift. “There were actually like three or four [employees] who decided to go home that day just because it was a little bit overwhelming.”

Over the pandemic, 423 food and retail workers have died; more than 83,000 were infected or exposed. “After 18 months of seeing co-workers get sick and pass away and to now have to be in a situation where that could happen again—aside from putting worker’s health at risk,” said Erica Smiley, Executive Director of union rights organization Jobs with Justice, “it’s also really traumatizing.”

The Missouri Trader Joe’s worker said they wished the company had taken time to make a decision on mask-wearing. “That was our safety blanket, almost. And now it’s just gone.”

The move is part of a general shedding of pandemic measures that aided workers. On Monday, Trader Joe’s followed up its end to a mask mandate with a repeal of hazard pay of an additional $2 an hour. Yet other measures, closer to hygiene theater, are still in place, said the Missouri worker. “It feels like unless you’re going to put our store completely back to normal, we’re still in a pandemic then, so we should still be getting ‘thank you’ pay,” they said. (Trader Joe’s calls hazard pay “thank you” pay.)

A Trader Joe’s worker in Los Angeles, California also said it was too soon to end hazard pay. “At the same time they’re taking away this money, they’re also saying ‘okay so put yourself at further unknown risk with the public.’” The LA worker said decisions Trader Joe’s made over the past year were to curry favor from the public. They pointed to guidance earlier in the pandemic when employees were discouraged from wearing masks so they wouldn’t make shoppers uncomfortable.

“At the same time they’re taking away this money, they’re also saying ‘okay so put yourself at further unknown risk with the public.’”

“We couldn’t wear it at the very beginning when it was breaking out hard and fast, but now you want to cover your butt and look good,” they told Mother Jones.

Workers say the mask guidance hasn’t only left them vulnerable. They’re worried about community spread. Experts worry masks in stores could lead to transmission in communities with low vaccination levels, too. Dr. Peter Hotez, vaccine expert at Baylor College of Medicine pointed to the eased mask guidance as a reason COVID transmission might rise because of the new rules at stores like Walmart, Trader Joe’s, and Costco.

In the South, where transmission may accelerate this summer due to vaccine defiance: Caveat emptor
https://t.co/PKJV7nD7jK

One worker, in the Carolinas, said they feel like they’re at low risk since they’re vaccinated. But the relaxing of standards does not seem to fit the narrative of an increasingly vaccinated population.

“I believe that the vast majority of people who are not wearing masks at our store are not vaccinated,” they said. “It is the same people who didn’t want to put a mask on from the get-go or think that it’s oppression.”