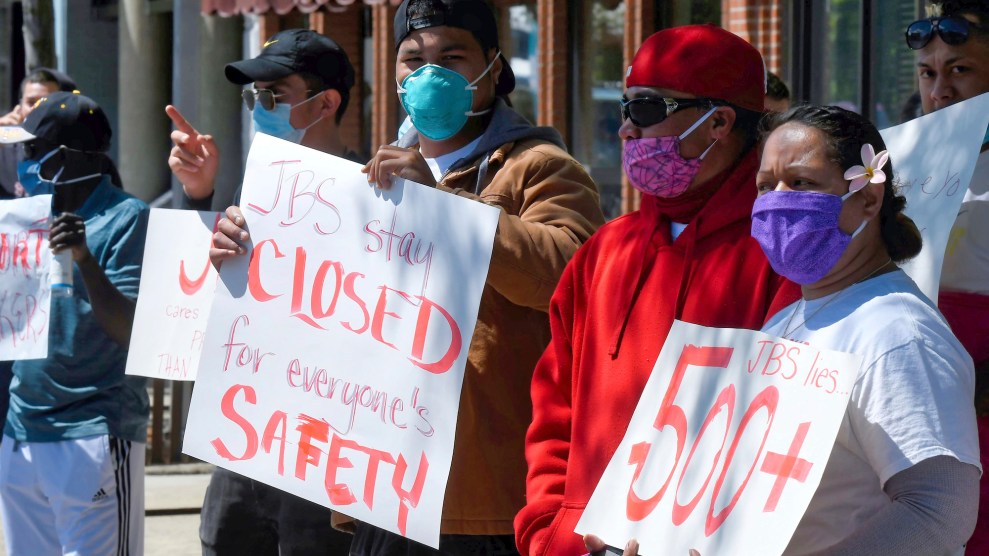 Workers at a JBS meatpacking plant in Logan, Utah protest after hundreds of their colleagues tested positive for COVID-19 in June, 2020. Eli Lucero/The Herald Journal via AP)

On the campaign trail last year, Joe Biden vowed that as president, he would stand up for workers being ravaged by the coronavirus pandemic. One set of laborers in particular caught his attention: those who toil in the large slaughterhouses that process the vast majority of the US meat supply, working shoulder to shoulder to cut animal carcassess into steaks, wings, and chops. As COVID-19 swept through plants, hundreds of workers died, tens of thousands tested positive, and slaughterhouses emerged as primary vectors for spreading the virus into surrounding communities. All the while, the Trump administration steadfastly ignored the pleas for protective action from labor advocates and defended industry bosses.

A little more than a year later, Biden’s ire appears to have cooled. On June 10, the Occupational Safety and Health Administration, a division of the US Department of Labor, released long-awaited new rules to protect vulnerable workers from the virus. In a move that stunned labor advocates, the rules, which include an obligation to ensure 6 feet of distance between workers as well as paid time off “to get vaccinated and to recover from any side effects,” only apply to the healthcare industry—leaving out other vulnerable workers.

“The danger for these essential workers is far from over. Thousands of frontline food workers are still at risk of infection.”

“Today’s new COVID workplace safety standard from OSHA represents a broken promise to the millions of American workers in grocery stores and meatpacking plants who have gotten sick and died on the frontlines of this pandemic,” Marc Perrone, president of the United Food and Commercial Workers Union, wrote in an emailed statement. “Vaccinations are helping us take control of this pandemic, but the danger for these essential workers is far from over. Thousands of frontline food workers are still at risk of infection.”

Indeed, three of the states with the highest concentrations of poultry workers—Arkansas, Alabama, and Mississippi—also boast the lowest levels of COVID vaccinations.

Two former OSHA officials blasted the decision to limit the new protections to healthcare workers. “Many low-wage workers are not vaccinated because they cannot afford the time off of work to be vaccinated or recover from post-vaccination adverse effects,” David Michaels, an epidemiologist at the George Washington University School of Public Health and OSHA administrator under former President Barack Obama, told Mother Jones. “Controlling workplace exposures is especially important now because the more infectious virus variants are spreading rapidly and the majority of working age adults are not vaccinated.”

Debbie Berkowitz, a senior OSHA official in the Obama administration and currently the worker-safety and health program director at the National Employment Law Project, called the decision “disappointing.” She added: “We know that less than one half of all the adult population is vaccinated—and unvaccinated workers remain at risk and must be protected, especially in low wage industries like meat processing that disproportionately employ Black and brown people.”

The new rules, known as an Emergency Temporary Standard, have a tortured history. A March 6, 2020, letter signed by more than 20 unions, including the AFL-CIO, urged OSHA to intervene to protect vulnerable workers, warning that “the current government recommendations to protect workers fall short.” Their concern proved prescient; but as the virus swept through meatpacking plants, farm fields, supermarkets, healthcare facilities, and restaurant kitchens, Trump’s Department of Labor, led by management-side occupational-law attorney Eugene Scalia, refused to act.

President Biden initially promised swift action. The day after taking office in January, he issued an order vowing to issue emergency temporary rules to protect “healthcare workers and other essential workers” by March 15. That deadline passed without action. On April 26, the Department of Labor announced it had finally drafted the rules and sent them to the White House for review, and that’s where the matter has stood since. Meanwhile, a “swarm of the most powerful lobbyists in Washington is circling as the White House reviews long-anticipated rules to protect workers from COVID-19—with meatpacking, hospital and retail industries working to delay the regulations while unions push for more urgency,” Roll Call reported on May 12. The industries appeared to have won that battle.

The pandemic isn’t over, but the Biden team’s determination to protect meatpacking and other vulnerable non-healthcare workers from the virus appears to have fizzled away.