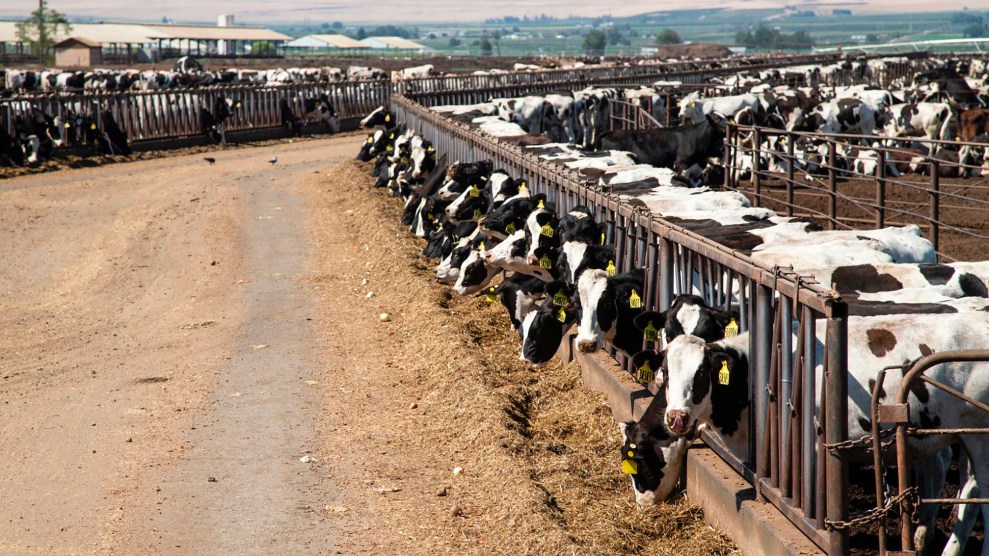 During a debate about the Democrats’ new infrastructure bill in the Senate chamber on Tuesday night, Sen. Joni Ernst (R-Iowa) took the floor, positioned next to a sign stating “No Cow Tax.” There, she floated an amendment to prohibit Congress from imposing “costly” new clean-air and specifically methane regulations on farmers. Her colleagues, including 20 Democrats, overwhelmingly passed it.

On the surface, the maneuver was pure political theater. Livestock operations are indeed massive emitters of the potent greenhouse gas methane—through cow burps and the breakdown of vast stores of manure—but “there are no pending animal flatulence regulations in the pipeline,” as Politico noted. Nor are there moves afoot to tighten notoriously loose Clean Air Act regulations for farms. Essentially, Ernst was protecting agriculture interests from a phantom legislative threat.

Methane wafts about at its highest level in 800,000 years.

While Ernst, a confirmed skeptic of accepted climate science, had launched a frivolous amendment, she was flirting with a dead-serious topic: Our agriculture system’s contribution to a fast-changing climate. And if her stunt ends up being enshrined into law as part of the new infrastructure package, it could hamstring the effort needed to address this unfolding catastrophe.

Just a day before the conservative stalwart’s Capitol Hill trolling, the United Nations’ Intergovernmental Panel on Climate Change issued its latest report. Before getting buried by the fog of the US news cycle, it drew headlines for its chilling conclusion, all the more potent as fires ravage the West and hurricane season looms back east: Global warming is “widespread, rapid, and intensifying.” Some effects, like rising sea levels, are likely locked in for at least the next 80 years, the report found. Others, like recurring, increasingly fierce heat waves that make it too hot for humans to safely be outside and threaten crop yields, can be blunted—but only if we make “strong, rapid, and large-scale reductions in greenhouse gas emissions.”

Buried in the report (see chapter 5), and generating little press coverage, lies some dire news about the topic Ernst had made a mockery of: the climate impact of our food system.

While the IPCC opus doesn’t drill down into emissions from food production per se, it does contain rich information about its impacts. Carbon dioxide, now prevalent in the atmosphere at it highest rate in 2 million years, gets most of the ink, but two other heat-trapping gases, methane and nitrous oxide, also contribute mightily to the greenhouse effect. These gases now waft about at their highest levels in 800,000 years, the report states—and are spewed in large quantities by industrial-scale farms, mostly related to the mass production of meat.

Methane, in particular, may hold the key to deciding whether the earth continues to morph into a disaster-movie set over the next generation. Major sources of methane include cow burps, livestock manure, and leakage from oil and natural gas drilling. Such human-triggered methane emissions account for about 30 percent of today’s warming over pre-industrial temperature levels. Less prevalent in the atmosphere than carbon, methane traps heat at 80 times carbon’s rate over the first decade after being emitted, after which it dissipates. Carbon dioxide, by contrast, lingers centuries. That means today’s methane emissions have an outsize impact on the next decade’s temperature patterns—and slashing them could help stabilize the climate in the short term.

The bad news: Methane has been flowing into the atmosphere at an accelerating rate. After growing rapidly in the 1980s, annual global methane emissions leveled off for a time, moving up very slowly between 2000 and 2006. But starting in 2007, they picked back up, and have been rising at ever-faster rates since. Causes of the upswing remain uncertain, the IPPC reports. Agriculture isn’t likely the dominant contributor to the recent methane boom, because the number of belching cows on the planet has held steady at about 1 billion for the past decade.

Meanwhile, the practice of fracking to extract oil and gas, which exploded the late 2000s, generates massive amounts of leaked methane, and is likely a major culprit in the upswing. The IPPC report concludes that both animal agriculture and fossil fuels production play a role. Overall, a 2021 report from the United Nations Environment Program and the Climate and Clean Air Coalition found, fossil fuel production accounts for 35 percent of global methane emissions, vs. 32 percent for agriculture.

Even so, there’s no doubt that cattle and other livestock are major contributors to the methane now heating the planet. Here in the United States, according to the US Environmental Protection Agency, agriculture is the biggest emitter, churning out 36 percent of total methane emissions, vs. 30 percent of oil and gas. Farm methane output has been rising steadily for decades, jumping 17 percent between 1990 and 2019, the EPA reports. While enteric fermentation (cow burps) explains about 70 percent of total farm-based emissions, most of the increase since 1990 can be explained by the way farms deal with manure.

When it’s spread over cropland at reasonable rates, manure makes the soil more fertile without releasing much methane. But when livestock are penned together by the thousands, as they are in the dominant form of US meat production, they generate so much manure that it has to be collected in vast “lagoons.” Farmers then liquify and spread it on fields at high rates—and their operations release methane in the process, the EPA states. As a result, methane emissions from manure leapt by the 68 percent between 1990 and 2019, the finds, citing the shift to ever-larger dairy and hog operations as the main driver.”

Ben Lilliston, director of rural strategies and climate change at the Minneapolis-based Institute for Agriculture and Trade Policy, told Mother Jones the IPCC’s findingof already out-of-control climate change underlines the need to cut methane emissions, fast. “Since methane is such a powerful short-term driver of warming, sharply reducing emissions now could buy us time to move away from burning fossil fuels,” he said.

In short, carbon dioxide from fuel combustion is a slow, steady climate driver, and needs to be curtailed, requiring an economy-wide shift. Cutting methane would relieve some short-term warming pressure while we do so. A 2021 report from the United Nations Environment Program and the Climate and Clean Air Coalition found that cutting global methane emissions by 45 percent this decade “would avoid nearly 0.3°C of global warming by 2045,” significantly tamping down the destruction of climate change over the period between now and then.

Methane leaks from fracking sites draw a lot of the attention, and we need much stricter drilling regulations, Lilliston said. “But we should also put a lot more focus on factory animal farming, which are a rising source of emissions.” In other words, with her recent legislative shenanigans, Sen. Ernst may have unwittingly stumbled upon some great ideas not currently on the policy agenda: It may be time for a cow tax, and a crackdown on methane emissions from the manure collected on factory-scale farms.