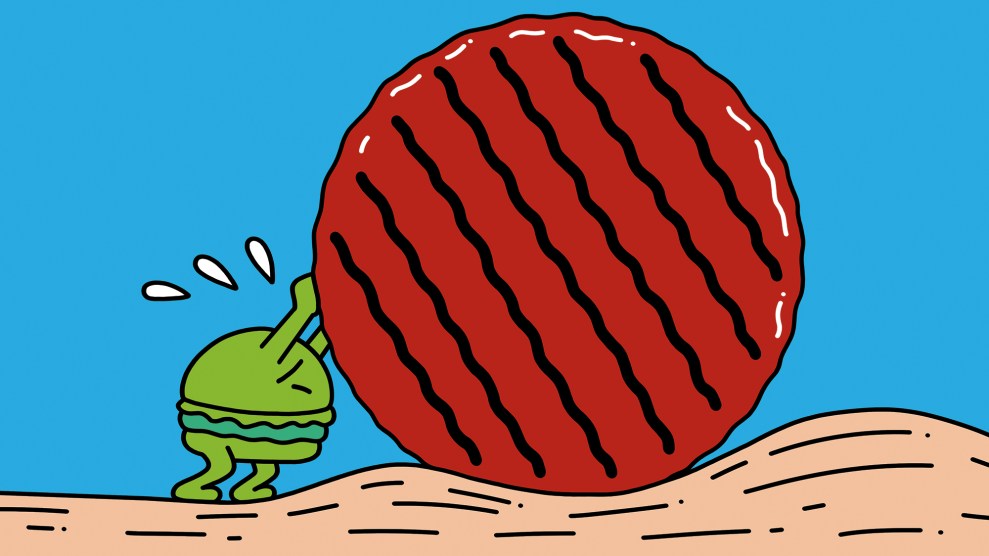 Spring was a bad season for carnivores: Popular cooking website Epicurious committed publicly to leaving beef out of all of its recipes, and one of the world’s most famous fine dining restaurants, Eleven Madison Park, announced that it was nixing all meat from its menu. Both moves were made in the name of environmental sustainability—meat production is thought to be responsible for around 15 percent of all human-caused greenhouse gas emissions.

While the news may have put ranchers on the defensive, entrepreneurs in another industry were jumping for joy. For the past few years, companies like Impossible Foods and Beyond Meat have been betting that their plant-based replicas of burgers and sausages will encourage people to ditch meat en masse.

Fake meats currently make up less than half a percent of the meat sector, but that’s quickly changing. Impossible Foods recently expanded to 17,000 US grocery stores and dropped its prices. A new report from investors Blue Horizon Corporation and Boston Consulting Group projected that the “alternative protein” sector could capture between 11 and 22 percent of global meat-eating by 2035. “When plant-based and cultivated meat reach cost and taste parity, they will simply replace industrial animal meat,” Bruce Friedrich, founder and president of alt-meat lobbyist the Good Food Institute, tweeted in April.

Fake meat might be doing just as much to lure vegetarians away from staples as it is luring meat-eaters away from sausage.

But how solid is the evidence that these faux burgers, once cheaper, will lure a significant number of people away from the real stuff? On one hand, people are clearly excited to try fake meat. Lewis Bollard, program officer for farm-­animal welfare at Open Philanthropy, points to surveys indicating that if prices were equal, 21 to 27 percent of Americans said they would embrace plant-based substitutes over real meat.

There’s at least one place where Impossible meat and ground beef are already sold for the same price: a UCLA dining hall. For her 2020 PhD thesis, Hannah Malan analyzed hundreds of thousands of dining transactions and found that after Impossible meat tacos, burritos, enchiladas, and salads hit the menu, students bought 9 percent fewer animal-based entrees. But there were unintended consequences: The sales of vegetarian fare also declined 4 percent. If Malan’s research is any indication, fake meat might be doing just as much to lure vegetarians away from staples as it is luring meat-eaters away from sausage.

This is a fear that some food scholars have long had about meat substitutes: that fake burgers reinforce people’s belief that meat must be at the center of every meal. Richard York, an environmental sociologist at the University of Oregon, points out that this obsession is “an American production.” For millennia, cuisines on entire continents have supported thriving cultures with a fraction of the roughly 223 pounds of meat per person annually that Americans eat.

But the rest of the world is adopting our habits; global meat consumption is set to expand by 12 percent by 2029. Giving people meatlike alternatives doesn’t guarantee that meat will lose popularity, York says. This is what’s known as the displacement paradox. For instance, in a study of meat-eating trends between 1961 and 2013, York found that when chicken and seafood became more available than other meats, Americans didn’t eat less beef and pork per capita—they just ate more meat overall. He expects faux meats will have a similar, modest effect. “If Americans consume 10 million Impossible burgers next year, I don’t think beef burger consumption will decline by 10 million,” he says. “It may decline a little bit.”

To counter the outsize damage meat exacts on the planet, we instead need to focus on the economics that have allowed the meat industry to prosper. Marion Nestle, professor emerita at New York University, agrees that fake burgers are a limited solution. “If we really want to help people cut down on the amount of meat they are eating, we need to stop subsidizing cattle feed, stop giving tax breaks to cattle ranchers, require feedlot owners to pay the costs of cleaning up the mess they make, and issue dietary guidelines with clear ‘eat less meat’ messages,” Nestle told me. When it comes to reining in meat production, she argues, “policy is what matters.”