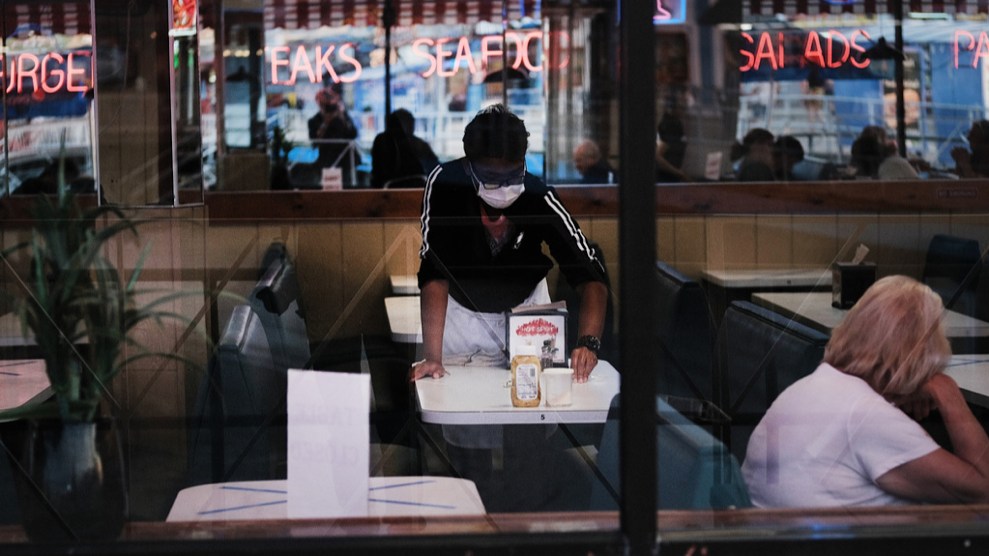 As if restaurant workers weren’t already suffering enough during the pandemic from lost hours and angry customers, many of them have also had to contend with not being paid for all of the hours they’ve worked.

Tipped workers, most of them restaurant workers, have experienced increased wage theft this year compared to last, according to a recent report by nonprofit restaurant advocacy group One Fair Wage. In a Facebook Live event last month, the group’s President Saru Jayaraman said: “We are seeing a real uptick in violations of workers’ rights in this industry.”

Wage theft—when employers fail to pay workers what they’ve earned—has a disproportionate impact on the tens of millions of minimum wage and subminimum wage workers. That’s in part because the Department of Labor, the agency responsible for investigating those violations, is under-resourced. The report notes that in 2015, even though the workforce had undergone massive growth, the number of investigators in the DOL’s Wage and Hour Division has remained nearly the same as it was 70 years ago. As a result, people of color, women and immigrants, who make up a large share of low-wage workers, have missed out on earnings.

More than a third of workers reported that their tips and additional wages fail to bring them up to the state’s minimum wage.

This is especially problematic for tipped workers. By law, restaurants in 43 states can pay workers a lower hourly minimum wage, down to $2.13 an hour, as long as the worker’s tips get their earnings up to the state’s minimum wage. If tips are inadequate, employers are supposed to make up the difference. But in a September survey of 238 tipped workers, more than a third of workers reported that their tips and additional wages fail to bring them up to the state’s minimum wage. And while almost half of tipped workers reported not being fairly compensated for overtime, women were 10 percent more likely to report not being paid time and a half.

Even when employers that underpaid workers pay back stolen wages, they’re often only required to pay back a portion of them. Jessica Looman, acting administrator of the DOL’s Wage and Hour Division, said that the department is “committed to getting back wages into the pockets of those workers whose rights were violated.”

Last month, California Governor Gavin Newsom signed a bill that could hit employers with felony charges for intentionally committing wage theft. And in recent years, district and state attorneys general in California, New York, and elsewhere have created teams to address wage theft and other employer-committed crimes against workers. In February, San Diego DA Summer Stephan announced the Workplace Justice Unit that will have a prosecutor, investigator and paralegal who will respond to tips on their hotline and inspect workplaces for wage and hour violations.

“Wage theft and labor trafficking are serious problems that we are working on in partnership with the community,” Stephan said. “We’re not going to allow workers to be exploited by heartless, greedy employers who break the law to line their own pockets.”

Stolen wages are just one challenge. Restaurant workers have also been tasked with enforcing COVID-19 protocols, sometimes putting their own safety at risk. In New York City, for example, a hostess at an Italian restaurant was allegedly punched on Sept. 16 after asking patrons to show proof of vaccination. More than half of workers surveyed by One Fair Wage reported hostility or harassment for sticking to pandemic safety measures.

Under these working conditions, nearly 8 in 10 workers say they will only stay in the industry if they receive a livable wage with tips on top. Some restaurant owners are paying attention. Michael Shemtov, owner of Butcher and the Bee serving new American cuisine in Tennessee and South Carolina, told One Fair Wage that raising wages will improve the restaurant industry.

“Raising the minimum wage and eliminating the sub-minimum wage for tipped employees will help level the field for all restaurants, improve the lives of our team members and strengthen local economies,” Shemtov said. “Taking these actions independently can be challenging, but doing it collectively will help us make our industry better and ultimately stronger.”