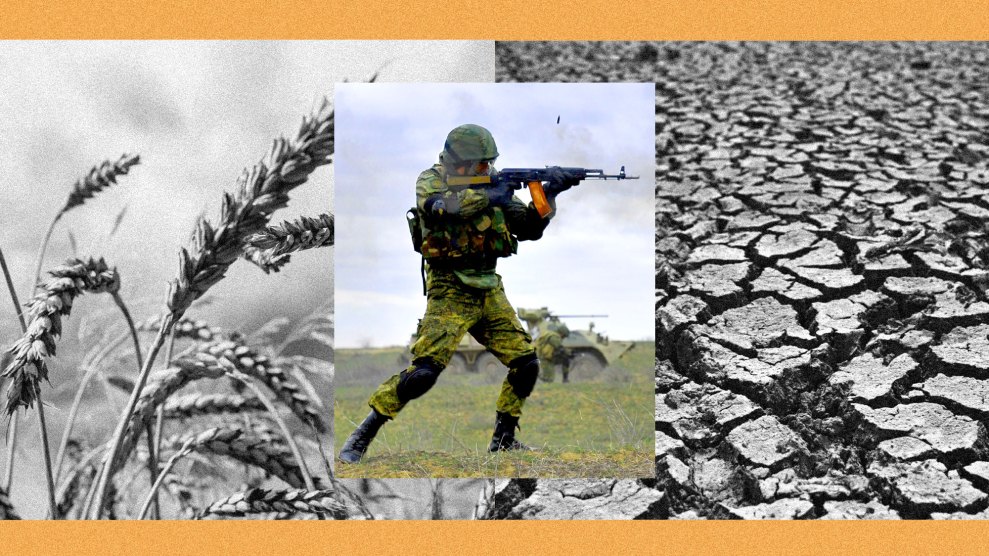 Back in February, Russia invaded Ukraine, turning Europe’s main wheat-growing region—a key source of grain and cooking oil for the Middle East and Africa—into a war zone. Global food prices had already been rising steadily for a year, pushed up by supply chain snarls brought on by the coronavirus pandemic. The war sent them soaring anew, to the highest levels since 1961, when the United Nations began tracking. On top of this, global public-health authorities warn that weather extremes related to climate change are wilting crops and shrinking harvests in alarming ways—setting the stage for what could be the worst hunger crisis in generations.

At a meeting of the United Nations on May 18, Secretary-General António Guterres reported that the number of “severely food insecure people” had doubled in just two years, from 135 million before the pandemic to 276 million today, “with more than half a million experiencing famine conditions—an increase of more than 500 per cent since 2016.” At the same meeting, David Beasley, executive director of the World Food Program, added that without an immediate reduction in the price of food and other necessities like energy, which is also soaring, the number of people experiencing famine could soon balloon to 49 million in 43 countries, a scale of misery not seen since China’s Great Leap Forward Famine of 1949-’51.

The number of people experiencing famine could soon balloon to 49 million in 43 countries.

The case of India, the world’s second-biggest producer of wheat, exemplifies how climate contributes to this mess. Typically, the great bulk of India’s harvest feeds domestic demand, leaving little left over for exports. But five consecutive bumper crops emboldened Prime Minister Narendra Modi to declare in April that his country’s wheat farmers could help offset the Black Sea shortfall, because “we already have enough food for our people.” In early May, he reiterated his vow, adding that “India’s farmers are coming forward to feed the world.” The announcements briefly helped calm markets and stabilize prices.

But even as Modi was talking up the nation’s wheat output, a historic heatwave had descended upon the subcontinent’s breadbasket region. “March’s temperatures were consistently 3–8 ºC above average, reaching highs of 44 ºC [111 ºF]— the highest they’ve been since records began 122 years ago,” Nature reports. The unrelenting heat parched crops and forced the government to slash its harvest forecast. Modi had to backtrack. Rather than “feed the world” with bounty, India would ban exports, the right-wing PM announced on May 16. In response, global wheat prices spiked yet again.

Meanwhile, in the United States—a key hub of production in the global food system of such staple commodities as wheat, rice, and corn—droughts supercharged by climate change are also wreaking havoc on harvests, threatening to add yet more fuel to the fire.

Much of the Great Plains, the nation’s most important wheat growing region, stretching from Nebraska to the Texas Panhandle, is currently beset by weather extremes. In the southern part, farmers plant wheat in the winter and harvest it early in the the summer. This year, a drought with conditions ranging from “severe” to “exceptional” has settled in, according to the US Drought Monitor. In Oklahoma, the combination of high heat and bone-dry soil has “devastated” the winter wheat crop, the Oklahoma State University Extension reported on May 23, and overall output will be half of last year. In the Texas Panhandle’s farm fields, an astonishing 79 percent of the winter wheat crop is in “poor” or “very poor” condition ahead of harvest, the US Department of Agriculture’s latest assessment, released May 23, finds. It’s not hard to see why: Virtually 100 percent of the region’s farmland acres lack adequate soil moisture, the report states. The dismal conditions will drag down the overall US winter wheat output by 8 percent this year, the USDA projects—right when the world needs more grain to hit the market

In the northern plains, where farmers plant wheat in the spring and harvest it in the late summer, output won’t likely offset the south’s shortfall. There, the opposite problem has descended: Spring storms have made fields too wet to plant. (Climate change has already dramatically increased spring precipitation in the region, and will continue doing so going forward, according to the Fourth National Climate Assessment, a multi-agency government report released in 2017). As a result of soggy fields, “US farmers have only seeded 49 percent of their intended spring wheat acres as of May 22, matching 2014 for the slowest pace since 1996, ” Reuters reported on Tuesday. The major buyers of US wheat include the Philippines, Mexico, Nigeria, and Yemen.

Meanwhile, in California’s Central Valley, a third consecutive year of epic drought has settled in. While the region is most famous for luxury crops (almonds, pistachio, walnuts, wine grapes) that don’t contribute much to the low-income countries now mired in hunger crises, it’s northern half, known as the Sacramento Valley, is a major producer of short-grain rice, about 44 percent of which is typically exported. This year, farmers in the region will receive a fraction of the irrigation water they usually get through canals designed to capture snowmelt from the Sierra Nevada mountain range.

As a result, farmers there are fallowing huge swaths of land. In a normal year, they devote about 500,000 acres to rice. Last year, already squeezed by dry conditions, land planted to rice dropped to 407,000 acres; and this year, the USDA projects acreage at 340,000 acres—about 32 percent below normal and the lowest level in 39 years. Mainly because of the California shortfall, the agency expects overall US rice exports in 2022 to fall 4 percent compared to last year’s level.

In short, California’s latest drought is zapping rice that could have gone to ease a mounting global food crunch. Unlike wheat, which is directly affected by the war, rice isn’t trading at all-time highs on global markets. But its price has surged lately, and it is trading at its highest level in a decade. “Rice is the primary staple for more than half the world’s population, with Asia, Sub-Saharan Africa, and South America the largest consuming regions,” the USDA states. In 2008, simultaneous spikes in wheat and rice prices triggered food riots “from Haiti to Bangladesh to Egypt,” CNN reported at the time.

“If we do not feed people, we feed conflict.”

The modern global food system may be reaching its limits. Bolstered by hybrid seeds, synthetic fertilizers and pesticides, and ever-huger diesel-powered machines, farms have gotten dramatically more productive. Between 1960 and 2010, worldwide agricultural output more than tripled, far outstripping population growth. But that ramp-up has led to geographic and economic concentration: food production consolidated into a few big exporting countries like the United States, Brazil and Russia, and traded by a handful of globe-spanning firms known as the ABCDs—Archer Daniels Midland (ADM), Bunge, Cargill, and Louis Dreyfus—which are currently raking in “tremendous profits” from high prices, reports the financial-analysis firm S&P Global.

Such a system may be efficient at maximizing crop yields (and profits for the ABCDs) under ideal weather conditions, but it’s also vulnerable to shocks from an ever-warmer climate and from wars like the one raging in Ukraine. In its most recent report, the United Nation’s Intergovernmental Panel on Climate Change found that warmer temperatures have already lowered yields of the globe’s big three staple crops—corn, wheat, and rice—by 5.3 percent since 1961, and that these crops’ yields will fall an additional 10-25 percent for each degree Celsius of future warming. Climate and geopolitical insults to the global food system have a way of intersecting and feeding into each other in hellish ways. As the UN’s Guterres recently put it, “If we do not feed people, we feed conflict.” And of course, conflict makes feeding people all the more difficult.

For decades, agencies like the International Monetary Fund have urged low-income countries to push small-scale farmers out of agriculture and into cities, while relying on global markets for food staples. The IPCC report suggests a different way forward: diversify the global food system by supporting those same farmers to grow food for local consumption, using “agroecological” methods that don’t rely heavily on pricey inputs like synthetic fertilizer (which has also skyrocketed in price since the war began). Think growing multiple crops in rotation; and combining crops with livestock and trees. As the threat of famine gains momentum and the climate warms, those ideas resonate.