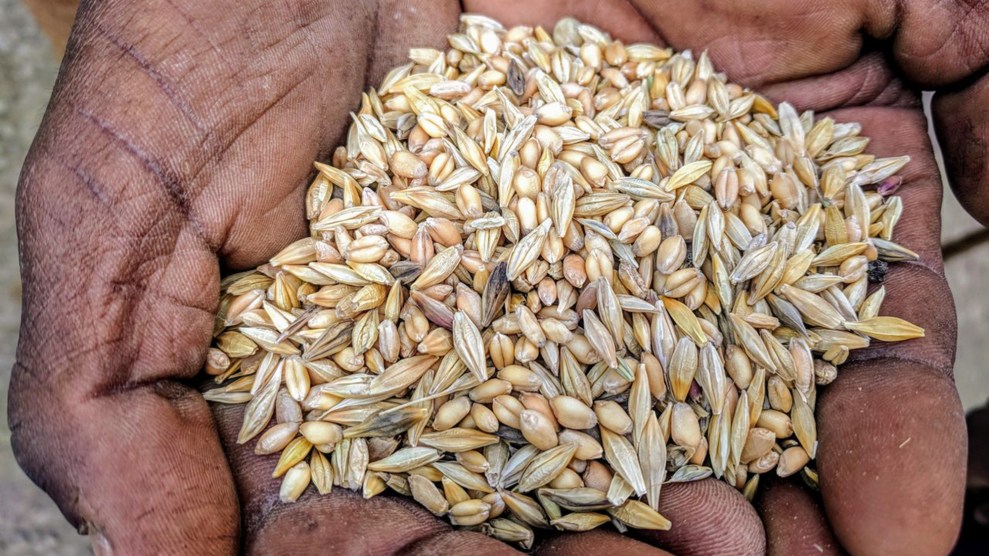 A farmer in Ethiopia cradles a handful of maslin, mixed grains including different varieties of wheat and barley, that are grown together. Courtesy of Alex Mcalvay

When Zemede Asfaw was growing up on a farm in eastern Ethiopia, he soaked up plant lore and other traditional knowledge the way a tree takes in sunlight and converts it to energy. “I knew the crops, and the wild plants, and the fruits and other things,” says Zemede, who goes by his given name.

The practical methods he learned covered every aspect of farming: Instead of stone walls or wire fences, plant field edges with darker crops, so the bold colors of red sorghum, for example, create a clear border between the family’s plot and that of a neighbor. Leave a few wild olive or acacia trees in the fields to harvest sustainably, over time, for firewood, animal fodder, or building materials. And instead of sowing the seeds of a single grain in orderly rows, spread a mix of grains all over the field, “mimicking nature so crops have random distribution patterns, as in natural forests,” he says. Once harvested, these grain mixtures could be turned into many things: nutritious bread, a kind of roasted-grain trail mix called kolo, beer, and the potent clear spirit known as areki.

Now an ethnobotanist at Addis Ababa University, Zemede conducts field research in northern Ethiopia. The dominant grains grown there are different than in the region of his youth—his family grew sorghum and maize, while the northerners prefer barley and wheat, better suited to their mountainous highlands—but the principle is the same: “We’ll plant the things that go together and are compatible with each other,” Zemede says. “Our farmers are good at mirroring nature.”

Ethiopia is one of the few places in the world where farmers still grow maslins, the general term for different varieties and species of grain that are sown in the same field, or intercropped. Maslins sustained humans for millennia, possibly predating the rise of agriculture more than 10,000 years ago. These grain mixtures tend to be more resilient to pests and drought, and to lend more complex flavors to breads, beer, and booze.

Worldwide, maslins fell out of favor long ago, replaced nearly everywhere by sprawling, single-grain monoculture—but a small and passionate group of scientists, including Zemede, is hoping to change that. A paper published October 13 in Agronomy for Sustainable Development makes the case for maslins to be revived by farmers around the world, for tastier bread, healthier crops, and more sustainable agriculture. The question is, why is it taking so long?

“We call it the Masluminati, a global conspiracy that no one is talking about,” jokes Alex McAlvay, lead author of the new paper and a botanist at the New York Botanical Garden’s Institute of Economic Botany. He’s kidding, of course, but while farmers and botanists the world over are familiar with companion planting and agroforestry (such as growing coffee in the shade of other trees), maslins, says McAlvay, have “flown under the radar for some reason.” He only learned of them when visiting Ethiopia on an unrelated project; overhearing farmers talk about planting teff, sorghum, and other grains together piqued his curiosity and, says McAlvay, “I went down the rabbit hole.”

The fact that maslins are grown today only in Ethiopia and pockets of Georgia, Eritrea, and a handful of other countries belies how widespread they once were. There is solid archaeological evidence that growing maslins goes back at least 3,000 years, and possibly much earlier. Wild wheats such as einkorn grow naturally beside wild varieties of oats, barley, and rye grasses, and may have been foraged before the advent of agriculture. But finding the first maslins is particularly tricky.

“Maslins are difficult to detect,” says Claire Malleson, an archaeobotanist at the American University of Beirut. Malleson was not involved in the new paper, but has studied intercropping in ancient Egypt. To find evidence of early maslins, Malleson and her peers sift through millennia-old middens—essentially garbage dumps—and whatever was left behind in hearths and granaries, where different grains may have been mixed together long after harvest, making it almost impossible to piece together how the crops were actually grown.

“I think they were probably used all over the place, either specifically or because that’s just how things grow,” she says. “Obviously now in farming it’s all very carefully harvested, but in the past it was all scattered everywhere.”

While extensive archaeological documentation of maslins may be lacking, echoes of their global prevalence can be found in language. Nearly every farming region on the planet had its own lexicon for growing mixed grains, from weedy, almost indestructible ryes to millets, wheats, and barleys.

In Medieval England, farmers grew a mix of oats and barley that they called dredge, or dredge corn, to feed their livestock. In France, peasants ground the traditional maslin of wheat and rye into flour for pain de méteil, or bread of mixed grains, now considered a gourmet loaf. In many places, maslins were such a part of life that the local word for them became shorthand for anything that was a mixture. In Ukraine and neighboring countries, the historic word for maslins—surjik or surzhyk—now means any local dialect that mixes in Russian, Moldovan, or other surrounding languages. In Turkish, mahlut, once the word for mixed grains, now means impure, a hint about what led to the downfall of maslins.

Frits Heinrich, a food historian and archaeobotanist at the Vrije Universiteit Brussel, says that starting in the early 18th century—and accelerating from the 19th century onward—a combination of technological innovations in crop production and processing, and the rise of scientific agriculture, including improved breeding, shoved maslins aside. The food industry, increasingly mechanized, preferred a uniform grain that would produce a uniform product, whether it was wheat for your bread or barley for your beer. Monocultures were both easier to harvest and process mechanically and less likely to vary in taste or how they performed. “Maslins, with the variability of their characteristics, were deemed less suitable,” said Heinrich via email.

The decline of maslins only gathered momentum from there. Twentieth-century innovations, such as the widespread availability of artificial nitrogen for fertilizer, led to exponential growth in single-grain crop yields. And so most of the world abandoned maslins.

Today, Ethiopian farmers are feeling the pressure to grow modern monoculture crops, thanks in part to a national push to become an agricultural powerhouse. “If you export grains, you want them to be uniform,” says McAlvay. “The global market wants a certain type of wheat for their Wonder Bread. A mixture of three varieties of wheat and four varieties of barley with some other things thrown in really doesn’t make the cut.”

Tesfanesh Feseha, a master’s student in botany who served as a field translator during McAlvay’s interviews with more than 100 farmers, says that, with the national embrace of monocultures, new farmers aren’t learning the art of cultivating grain mixtures. “Young farmers didn’t even know the mixtures we were looking for,” she says.

Zemede, who collaborates with McAlvay but was not directly involved in the new paper, remains optimistic. “[The push for] modernization is strong. It comes with technology and attractive things…but it could be temporary,” he says. From a farmer’s perspective, he understands the appeal of a lucrative offer to grow a specific grain, but believes that “the scientific community should offer better.”

To that end, through his research and countless conversations with farmers, Zemede is promoting the maslin tradition in his homeland. Together with McAlvay, and like-minded colleagues in Georgia and small, experimental farms in Poland, Finland, and elsewhere, he hopes to inspire wider appreciation of maslins, from the people sowing the fields to the urbanites purchasing an artisanal loaf of mixed-grain bread.

A maslin renaissance may be particularly helpful now, as farmers around the world struggle with soils degraded by modern monoculture, a growing population, and a changing climate.

“This is about bringing power back to the farmers who understand the land.”

“Small grains are supposed to be hit really hard by climate change,” says McAlvay. Maslins, he adds, have “all kinds of advantages,” including a more reliable yield, a more complete nutritional profile, and the ability to grow in marginal soils and to survive drought. The grain mixes also appear to have natural resistance to pests, from insects to fungal diseases. While a pest adapted to attack one species of grain will have a field day, no pun intended, when set loose in a monoculture crop, it won’t be able to jump from plant to plant if the individual it attacks is surrounded by other kinds of grain, McAlvay explains.

The new paper from his team, focusing on multiple sites in Ethiopia, is the first comprehensive case study of growing maslins in the modern era—and other researchers are enthusiastic about it.

“I think this is an excellent paper,” said Heinrich, who was not involved in the research. He praises it for both pulling together previous research on maslins and showing their potential for meeting the challenge of feeding billions on a warming, less stable planet.

Malleson is similarly effusive. “I love this paper,” she says.

“This is about bringing power back to the farmers who understand the land and the farming and how to manage things,” says Malleson, who has family members in farming and feels close to the topic. “It brings the power back down to the ground level, literally.”

The new paper is just a first step toward nudging maslins back onto the world stage, and McAlvay and colleagues are already planning additional studies. Meanwhile, Zemede continues to encourage Ethiopian farmers to preserve the maslin tradition he learned as a boy, and hopes more people globally embrace these grain mixtures as our ancestors once did.

“In biology we say diversity must survive,” says Zemede. “If diversity is lost, then we will be lost.”