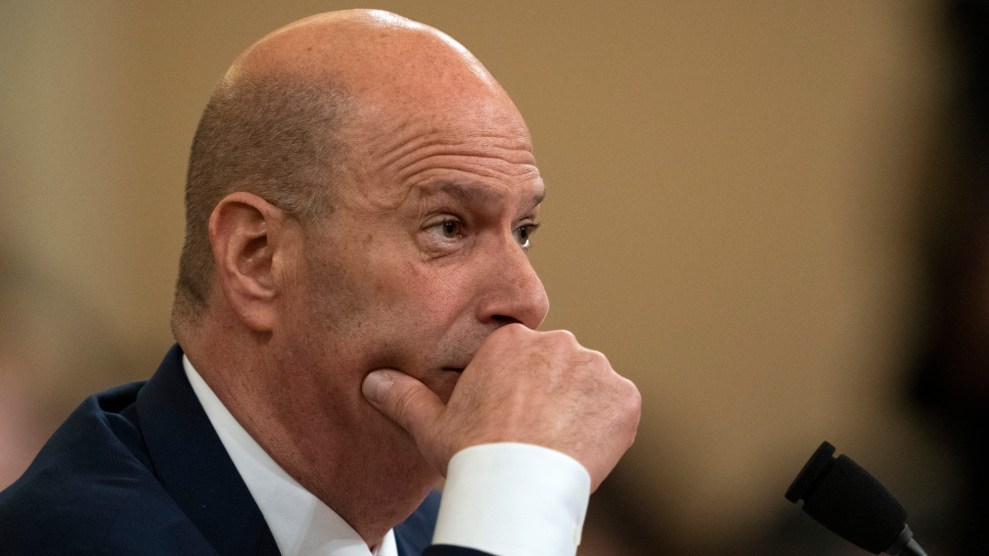 Gordon Sondland is one of many ambassadors appointed by President Donald Trump without relevant foreign policy experience. Under Trump, the percentage of inexperienced diplomats has risen relative to President Barack Obama.Alex Edelman/Getty

“I am not a note taker, nor am I a memo writer. Never have been.”

Those words, documented in Gordon Sondland’s opening statement as part of Wednesday’s impeachment hearing, show just one of the differences in style between Sondland, a GOP megadonor tapped to be US ambassador to the European Union, and his colleagues in the Foreign Service who assumed senior roles in the State Department after lengthy careers in government.

Ambassadors George Kent and Bill Taylor, both career Foreign Service officers who were stationed at the US embassy in Kyiv, told lawmakers that they maintained copious notes during conversations with foreign leaders and other administration officials. When Taylor testified last week, he was asked if he kept records of the conversations referenced in his testimony. “All of them,” he replied.

Jennifer Williams, a Foreign Service officer who served on Vice President Mike Pence’s staff, also memorialized important events or details. During her testimony on Tuesday, she told lawmakers that she knew President Donald Trump’s July call with the Ukrainian president included a direct reference to Burisma, an energy company not mentioned in a memo of the call released by the White House, because it appeared in her contemporaneous notes. “My notes did reflect that the word Burisma had come up in the call, that the president had mentioned Burisma,” she said.

Sondland, a foreign policy neophyte who received the job after contributing $1 million toward Trump’s inauguration, apparently had no such habits. “Talking with foreign leaders might be memorable to some people. But this is my job. I do it all the time,” he said Wednesday. Given the apparent gaps in his memory, Sondland said he needed access to State Department records to jog his recollection of certain events, but the White House refused to provide them. “In the absence of these materials, my memory has not been perfect,” he said.

Sondland’s private deposition reflected that discordance between his own memory of events and the view captured by witnesses like Taylor, Williams, and Kent. At the private hearing last month, Sondland initially denied knowing of Trump’s desire to hold up military aid to Ukraine until its leaders issued a statement connecting the Bidens to corruption, but days later, he amended his testimony, saying his memory was “refreshed” after reading how Taylor and other witnesses portrayed events. In his opening statement Wednesday, Sondland described Trump’s policy as a clear quid pro quo, but adjusted his testimony again, this time saying the request for Ukraine’s anti-corruption statement was in exchange for an in-person meeting between Trump and the Ukrainian president. (Sondland said he assumed there was a link between military aid and the anti-corruption statement as well, calling it a “potential” quid pro quo.)

The relevance of Sondland’s lack of experience and untraditional professional habits has come under increasing scrutiny as he has occupied a significant role in the Ukraine scandal. In addition to not taking notes, he also broke from diplomatic protocol by calling Trump and other foreign leaders on his cellphone, making it especially easy for Russia and other American adversaries to spy on him. “I have unclassified conversations all the time from landlines that are unsecured and cellphones,” Sondland said Wednesday.

Since Trump entered office, inexperienced diplomats like Sondland—chosen not because of their professional qualifications, but their history of political donations—have assumed more vital diplomatic posts than any president since Franklin Roosevelt. As I reported last week:

Most ambassadors are career foreign service officers, highly trained professionals who have worked their way up through the diplomatic ranks. But a significant minority are so-called “political ambassadors” who come from outside the diplomatic corps—generally a mishmash of campaign donors, ex-lawmakers, and retired military officers. Under President Obama, these political ambassadors made up 30 percent of total appointees, according to a paper by Ryan Scoville, an associate professor at Marquette University Law School. Under Trump, that figure has ballooned to more than 40 percent, the highest number in nearly eight decades.

Many of these political ambassadors are not appointed to especially volatile regions of the world—those hotspots are generally overseen by career Foreign Service officers—but in Trumpworld, where freelancing by cronies like Rudy Giuliani is common, someone like Sondland was able to outflank career US officials responsible for Ukraine policy to assume an outsize role in negotiations with Ukrainian leaders despite the country not being an EU member. The results of that strategy, evidently favored by Trump, are playing out live in front of millions of people as the House continues its impeachment inquiry.