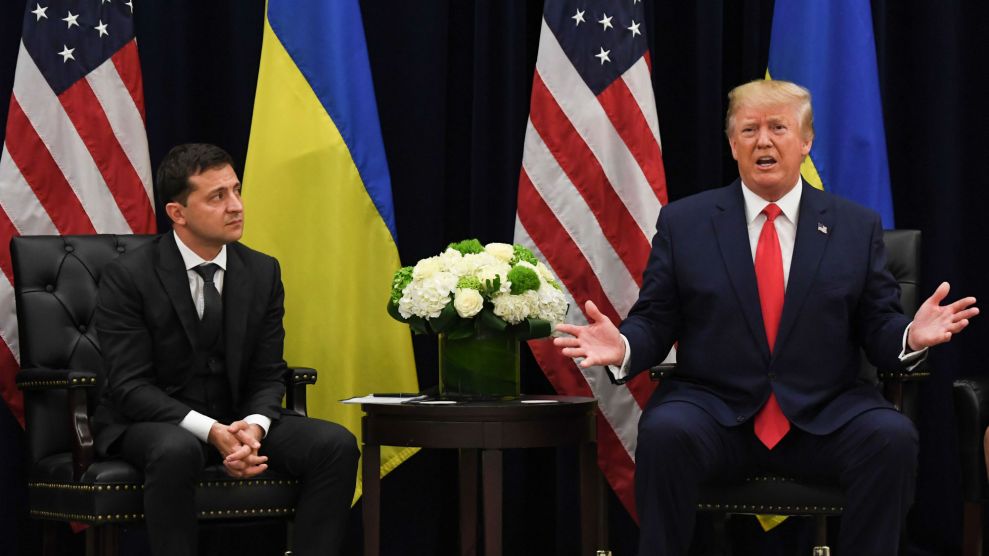 Newly revealed communications between White House staffers and officials at the Pentagon are shedding additional light on the Ukraine scandal—even as the Senate prepares for President Donald Trump’s trial following his impeachment by the House of Representatives last month. Just Security reported Thursday that Michael Duffey, a political appointee who oversees defense spending at the White House Office of Management and Budget, told Pentagon Comptroller Elaine McCusker in an August 30 email that he had “clear direction from POTUS to continue to hold” vital military aid that was supposed to be sent to Ukraine. That statement was one of a number of redacted lines in 300 pages of emails the administration released last month to the Center for Public Integrity after a court order in a Freedom of Information Act lawsuit. Just Security says it reviewed unredacted copies of the emails.

The emails obtained by Just Security also raise questions about Vice President Mike Pence’s role in Trump’s efforts to pressure Ukrainian leader Volodymyr Zelensky to announce investigations of Trump’s political enemies. Pence met with Zelensky on September 1. Prior to this meeting, Eric Chewning, chief of staff to acting Defense Secretary Mike Esper, told McCusker, in reference to the hold on Ukrainian aide: “The Ukrainian PM speaks with VPOTUS on Tuesday. We expect the issue to get resolved then.” (The email appears to misstate Zelensky’s job; he is Ukraine’s president, not its prime minister.)

The emails don’t say why officials thought Pence could resolve the matter. But Trump reportedly pushed Pence to urge Zelensky to take more aggressive action on corruption. It has since become clear that Trump’s references to corruption in Ukraine were actually calls for investigations into Joe Biden and bogus allegations about Ukrainians interfering in the 2016 election to help Hillary Clinton. And Gordon Sondland, Trump’s ambassador to the European Union, testified in November that he told Pence just before the vice president’s meeting with Zelensky that Ukraine would receive its stalled aid money only if it announced the investigations Trump sought. Pence, through an aide, has denied Sondland’s account and has asserted he did not know that Trump’s references to corruption related to Biden and the 2016 election. But the same day that Pence met with Zelensky, Sondland told a Zelensky aide, Andriy Yermak, that security assistance money would not be released until Zelensky agreed to announce an investigation related to Biden, according to Sondland and former White House national security official Tim Morrison. Pence’s office is resisting congressional calls for more information on the VP’s role in Ukraine, refusing to declassify details of a September 18 call he had with Zelensky.

The Just Security account describes repeated emails from McCusker to Duffey and others warning that the ongoing hold might be  illegal—a potential violation of a law requiring the executive branch to spend money as appropriated by Congress or to tell lawmakers why it refused to do so, which the administration did not do. Duffey enforced the hold by inserting a footnote in budget documents. It said in part that the “pause in obligations will not preclude DOD’s timely execution of the final policy direction.” By August 9, though, McCusker warned him in an email that the hold could prevent the Pentagon from transmitting the money before the end of the fiscal year on September 30 and pushed for changing the footnote to reflect that reality.

Yet in a December 11 letter to the Government Accountability Office, OMB General Counsel Mark Paoletta claimed that “at no point during the pause in obligations did DOD [Office of General Counsel] indicate to OMB that, as a matter of law, the apportionments would prevent DOD from being able to obligate the funds before the end of the fiscal year.” This seems misleading. McCusker, while not in DOD’s Office of General Counsel, had asked Duffey if OMB had cleared its actions with that office and had repeatedly raised concerns about the department’s ability to pay out the funds. The Trump administration released the aid to Ukraine after a whistleblower exposed the the matter, though some of funds remain unpaid.

Senate Minority Leader Chuck Schumer (D-N.Y.) said in a statement Thursday that the newly revealed emails undermine efforts by the Senate’s Republican leadership to hold a trial for Trump without key documents or testimony from witnesses, including Duffey, White House chief of staff Mick Mulvaney, former national security adviser John Bolton, and Robert Blair, another top OMB official. “Importantly, that Mr. Duffey said there was ‘clear direction from POTUS to continue to hold’ only further implicates President Trump and underscores the need for the Senate to subpoena the witnesses and documents we’ve requested at the onset of a trial,” Schumer said. “The American people deserve a fair trial that gets to the truth, not a rigged process that enables a cover-up.”

Schumer and House Speaker Nancy Pelosi (D-Calif.) are sparring with Senate Majority Leader Mitch McConnell (R-Ky.), who has said hopes to acquit Trump after a brief, limited Senate trial. McConnell said he plans to work closely with the White House during the process and stated last month that he is “not an impartial juror.” Senate rules require members  to pledge “to do impartial justice” at the outset of an impeachment trial.

Thursday’s report is part of a stream of revelations that makes it clear the Trump administration is still sitting on a substantial amount of relevant information that has not been made available to Congress or the public. Trump and his backers say he did nothing wrong. So what are they hiding?