AFTER THE BAILOUT….Following on to my post this morning about the Wall Street bailout, you might be wondering what happens after Hank Paulson buys up all the toxic waste that U.S. banks are currently holding on their balance sheets. If the feds pay some kind of halfway reasonable price for this stuff (whatever that might be), and after everything is cleaned up it turns out that — surprise! — everyone is insolvent after all — what then? 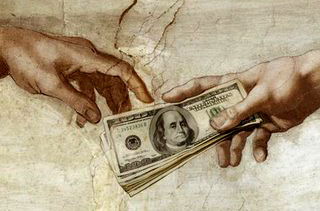 Hell if I know. I guess we’re just hoping that this turns out not to be the case. If Hank & Co. are wrong about this, it means yet more taxpayer dough down the rathole, I suppose. We have to have a functioning banking system, after all, so we’re sort of over a barrel here.

If I can be allowed to state the obvious for a moment, one of the things that makes this so frustrating for us little people is that most of the tycoons who made fortunes off this Ponzi scheme are going to get off scot free (or close enough not to make a difference). Sure, we can punish the banks if we want to, but who really cares about that? They’re just legal fictions. What you’d really like to do is punish the people who were running the banks while all this was happening. But they’ve already got their money, and there’s no legal way to take it back. The poor saps who are losing their homes, however, are easily and personally identifiable, so it’s easy to punish them. And we will. In the end, the titans of Wall Street will funnel their newly titanic fortunes into numbered Swiss bank accounts and lie low for a couple of years, while all the rest of us pay the price. Makes you feel all tingly inside, doesn’t it?

The only upside from this steaming mess is the possibility that Congress might pass laws to rein in bad behavior in the future and make the Wall Street casino a wee bit less insanely profitable than it is today. Maybe by taxing extremely high incomes at higher rates. (Hell, taxing extremely high incomes at normal rates would be a start.) Or regulating leverage ratios for everyone, not just commercial banks. Or putting an end to no-down-no-doc-no-asset mortgage idiocy. That’s closing the barn door a few years too late, of course, but at least it would force tomorrow’s rocket scientists to go to the trouble of figuring out new ways to fleece us.

Atrios says: forget it. Sensible new regulations aren’t gonna happen. And he may be right. Republicans will certainly fight any serious reforms that might hurt rich people, and Democrats haven’t exactly covered themselves with glory on this score either. But look: that’s what we’re all here for. We should be raising hell with our congressional representatives to get serious about this stuff, and if they won’t do it we should be working to elect new ones. If the current crew won’t commit to changing things, then stop giving them money. After all, this is at least as important as net neutrality or immigration reform or raising the minimum wage, isn’t it? So pick up the phone and start complaining.

And while we’re on the subject, it’s easy sometimes to lose sight of the outright fraud (and might-as-well-be-fraud) that was the foundation stone for so much of our current crisis. After all, most of the day-to-day coverage over the past few weeks has been about arcane financial maneuverings and numbers with lots of zeroes after them. To refresh your memory, then, you might want to check out Dean Starkman’s “Boiler Room” in the current issue of CJR. If you’re not mad enough to call your congressman yet, this ought to help get you there.